Ah, it feels good to be writing and playing actual battle reports again! Especially if it’s an excuse to pull out one of my favourite Cygnaran Warcasters, good ol’ Nemo3!

And hey, if Darrell feels like dropping eMadrak and all his weaponmasters into my list… what could possibly go wrong!?

One of our listeners requested that we play a game with Nemo3 and I was happy to oblige! The original form of this list had a Reliant and a max unit of Silverline Stormguard… but I forgot both of those at home, so I quickly threw together a different list I figured would work almost as well!

As for Darrell… I showed him my list, and he decided he wanted to practice his Madrak all-comers list. No complaints on my side… always happy to get some more “not Runes of War” practice in!

Initiative: Darrell won initiative and elected to go first. Marc picked the side of the table with less terrain.

With that, we were ready to go! 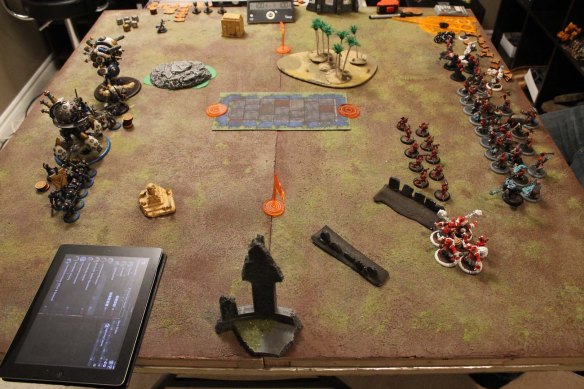 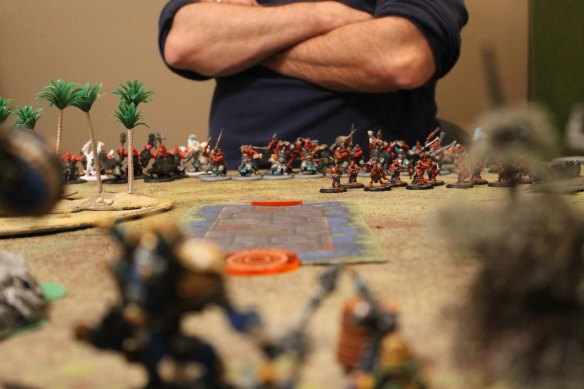 – Nemo allocates 1 to each warjack: becomes 2 each from Finch.
– Stormblades declare Run/Charge. 2 charge Fire-Eaters: both out of Assault range by about 1mm. Rest run around and spread out.
– Storm Strider activates and walks forward a bit. Takes 2 shots at the closest Fire Eater: misses, needing 6s.
– Journeywoman puts “Arcane Shield” on the Strider
– Reinholdt reloads Nemo
– Nemo activates. Casts “Lightning Shroud” on Dynamo, “Failsafe” on the Stormwall. Moves up to get at the edge of CTRL with the closest Fire Eater: Shoots, needing a 6, misses. Second shot, boost to hit with last Focus, misses.
– Stormwall activates and moves forward. Shoots closest Fire Eater, misses. Second big gun shot boosts to hit, hits, boost damage, kills. Drop Covering Fire, throw a pod down in the zone.
– Dynamo moves up, staying well back from the Pyg token.
– Finch moves up near Nemo. 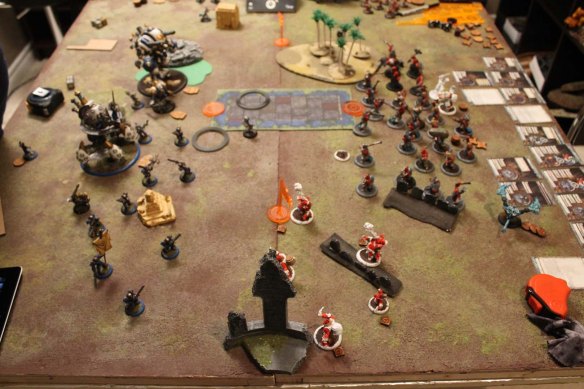 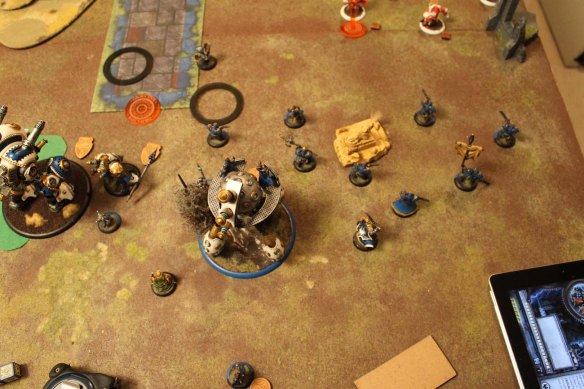 – Fire checks has the closest Fire Eater go out and one from the back unit, but the rest stay on Fire.
– Pygs pop up and are placed.
– Pyre moves up, shoots the not-lit Fire Eater, hits, and lights it on Fire.
– That unit of Fire Eaters charge forward: 1 gets range on Nemo for an Assault Shot, which hits and inflicts 8 damage. Other shot kills a Stormblade
– 2nd unit of Fire Eaters charge forward: 2 get range on Stormblades for Assault Shots, the other charges one of the other Fire Eaters. Kills a few more Stormblades and the Fire Eater with a cranked damage roll.
– Pygs walk forward and take some shots, killing the Stormpod and a few more Stormblades
– Fennblades move up and spread out
– Warders get Pathfinder from a Fell Caller and run forward and spread out again.
– Winter Troll moves up near the Objective
– Madrak moves up 5”. Darrell measures CTRL, and confirms that the Fire-Eater that hit Nemo is about 0.5” out of CTRL, and elects not to Feat.

– Fire on Nemo goes out.

– Nemo allocates 2 to each warjack (each becomes 3 from Finch), upkeeps Failsafe for free and spends 1 to upkeep Lightning Shroud.
– Reinholdt moves up and reloads Nemo
– Nemo activates, and moves towards the middle of the table, getting the Winter Troll and most of Darrell’s army in CTRL range. Pops Feat, takes a shot at the Winter Troll: misses. Second shot, boost to hit, hits: cranks damage on the Winter Troll (three 6s), kills 1 Fennblade and a Stonebearer.
– Finch moves up and takes a shot: kills two more Pygs, both fail Tough.
– Strider activates, walks to block LoS from the left, and shoots: first shot kills 3 Fire Eaters, hits second shot and kills 2 more.
– Dynamo moves up to block LoS to Nemo from the front and opens fire: Kills 3 Fennblades and Toughs 1.
– Stormblades activate and walk around, taking shots at Fennblades. Misses 1 shot, kills 1, and knocks down 1 with a Tough.
– Stormwall activates, moves up to block LoS from left. Opens fire on the Winter Troll: First shot misses. Second shot, boost to hit and damage, kills the light warbeast. Drops Covering Fire between the Warders and the Stormwall. Lobs out a pod, killing 1 more Pyg.
– Stormcaller moves over and does a Surge with the Pod, getting 2 Fennblades: Misses 1, Toughs the other. 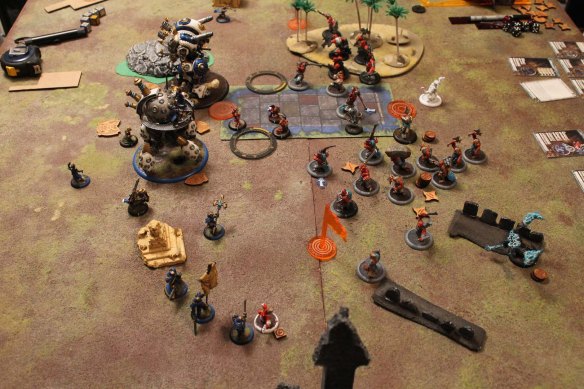 Trolls, Turn 3
– Vengeance on the Fennblades triggers: they shuffle around a little, since most of them are Knocked Down.
– Runebearer activates and casts “Blood Fury” on the Fennblades.
– Krielstone moves up, uses Protective Aura and +1  Strength
– Fennblades charge. 1 Charges the Stormblade Captain, 2 charge the Storm Strider, 1 runs up to the Strider, and 1 Charges the Objective. Stormblade Captain is hit and killed. Darrell intelligently activates the Fennblades such that neither are pushed out of melee with the Strider, and he inflicts about 10 damage total. Inflicts 4 on the Objective.
– Pygs activate, shuffle around a little, and take their attacks on the Objective, destroying it.
– Warders get Pathfinder (again) and charge the Stormwall: 2 manage to get distance (going through the Covering Fire and taking a few points of damage, which doesn’t proc “Battle Driven” because it’s not an attack), one charges the Stormcaller, and the others run up. Both attacks hit and inflict pretty respectable damage on the Stormwall: about 15 points total. Stormcaller is missed.
– Madrak activates, moves up, casts “Blood Fury” on the Warders. Lobs his ax at the Strider and inflicts a bunch of damage. Pops his Feat, lobs his ax at the Strider again and leaves it on 5 boxes.
– Feat Attacks: Warders swing on the Stormwall twice more, inflicting another 15 points of damage or so. 4 Fennblade attacks on the Strider hit it and leave it on 3 boxes. 3 Pygs shoot the Strider: some miss, one hits and leaves it on 1 box (yay!) 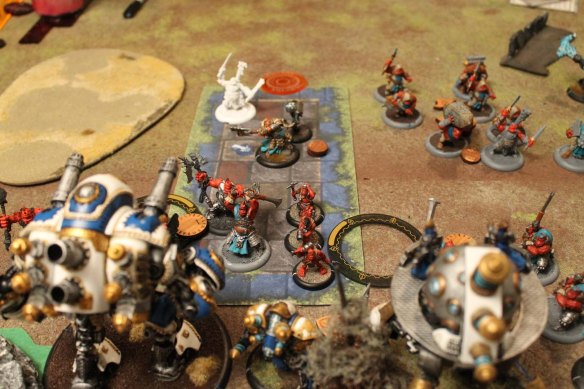 Okay, I will admit that the game was a lot closer than I thought it would be… Madrak is a tricksy warlock, and almost losing to 2 Fire Eaters… that was humbling. Nemo3 is *less* fragile than Nemo1… but still really, really fragile. Have to remember that.

Otherwise, a fun game and a lot of interesting stuff happening. I like this Nemo list, but I’m not in love with it, so it will probably be tweaked a bit for the next time I play it. Still, it’s great to reconnect with Nemo3 and remember how insanely fun he is on the table!

Thanks for reading/listening, and remember to check out the small Combo Smite Store we have up! Help Combo Smite get better gear to bring you better podcasts!