So this battle is, shall we say, a little heavy on the proxies… I blame Todd!

But hey, we get a chance to explore the new Kromac in all his raging, axe-wielding glory! Bring it on!

I’ve been working on refining a few of my Cygnar lists… getting ready to say goodbye to them for a year as I switch back to primarily Menoth for 2016… at least, in theory. I may stick with them until March for the Ontario Team Championships… we will see! Either way, I wanted to get a chance to get some more time with one of my favourite time lords… Major Victoria Haley!

Todd, for his part, wanted to try out the new Kromac (affectionately referred to as “Big Mac”) with a neat tier list. Turns out it required just a little proxying…

In Todd’s defence, he *does* have most the models required, but had forgotten to repack his bag after the last tournament. So the pictures will be weird, and we apologize for that!

The Scenario was Fire Support (2 flags slightly short of the midline, friendly objectives 5″ behind that, Killbox is yes).

We rolled for initiative, which (with Anastasia’s help) I won and elected to go first. Todd took the side of the table he was already sitting at.

Todd’s deployment (due to the proxies) may need some explaining…
Both units of Bloodweavers went to the left flank (all left-right comments are from my perspective) with 2 of the Night Witches. The Gorax and Argi went near the middle, with Kromac smack in the middle of the table next to the Pureblood. The Bloodpack went to the right, and the last Night Witch went on the far right.

With that, we are ready to go!

– Marc allocates 1 Focus to both warjacks, and we’re off.
– Blazers run forward and spread out on the right side, staying about 4″ behind the midline due to the long threat range on the Bloodpack.
– Junior puts “Arcane Shield” on the Stormwall.
– Stormwall and Thorn both run forward, up the middle.
– B13 run forward into a forest to get Stealth.
– Alexia runs forward aggressively towards the Bloodweavers
– Anastasia runs up near Marc’s Objective for Cover.
– Haley walks forward, casts “Deceleration” and camps the rest.
– Eiryss runs up behind a wall on the left side of the table. 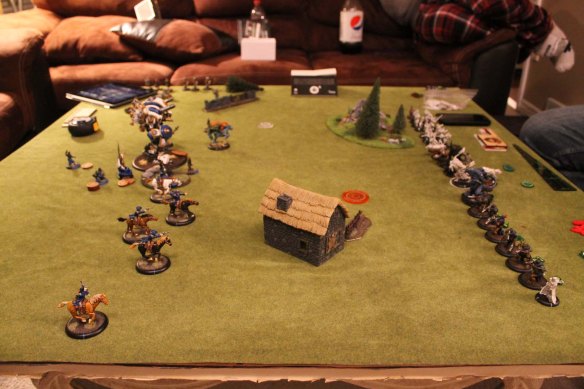 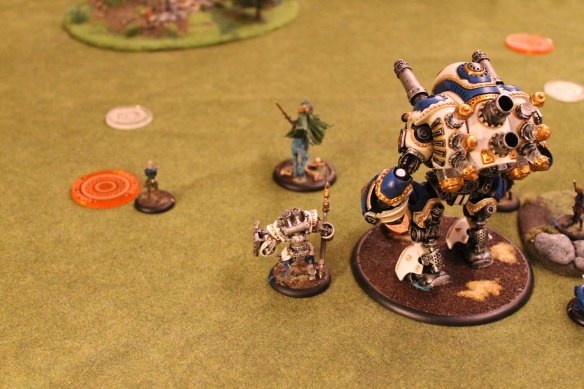 – Both units of Bloodweavers run forward and spread out.
– One of the Argi runs straight towards Alexia.
– Kromac activates and moves forward. Todd considers for awhile whether to “Primal Shock” through that Argus onto Alexia, but decides that the odds are against it. He camps heavily.
– Night Witches all run forward
– Bloodpack run forward around the house on the right
– Pureblood warps for Spellward and moves up near the objective.
– Stalker warps for Prowl and runs into the forest behind the Bloodweavers.
– Gorax and other Argi rile for a few and move forward. 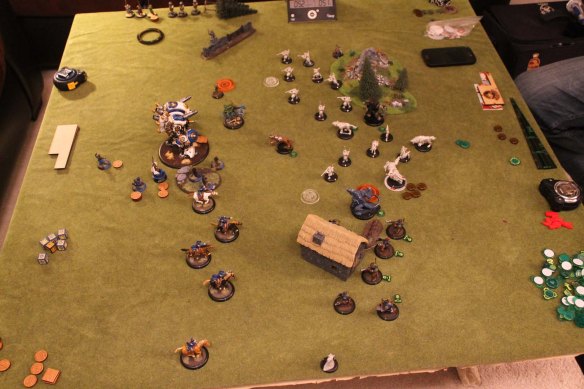 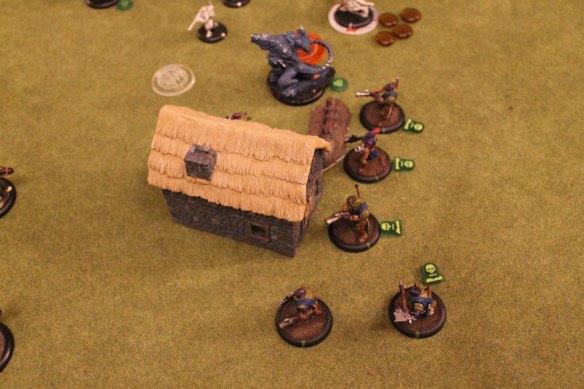 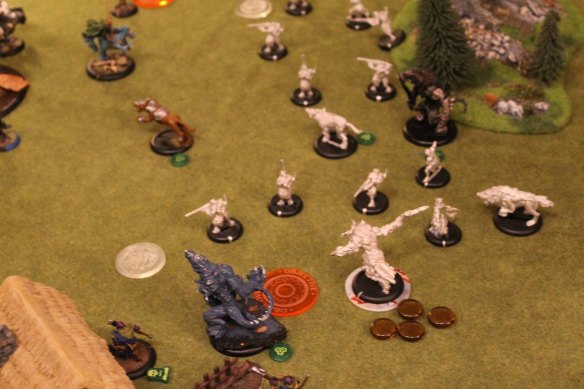 – 2 Focus to the Stormwall, pull from the Squire, upkeep Arcane Shield
– Haley goes first. She casts “Deadeye” on the B13 and Blazers, moves up to *just* be inside the Killbox, and pops her Feat, catching all of Todd’s army except the Gorax, and 2 of the Night Witches.
– Tempest Blazers activate and walk forward, pumping Brutal Damage shots into the closest Night Witch and Bloodpack. Manage to kill the Witch, 1 Bloodpack, and heavily wound 2 others. They then Light Cav backwards.
– Black 13th activate. Watts and Lynch both shoot Bloodweavers, killing them. Ryan drops a Magestorm shot which scatters onto another Bloodweaver, killing it. Alexia collects 2 souls.
– Stormwall activates and aims. Shoots the closest Argi once, cranking the damage, and a second shot goes into the other, doing moderate damage. Spins up the Metalstorm cannons, getting a total of 2 shots: the first kills the heavily wounded Argus, and the other is out of range. Alexia collects her 3rd soul from the Argus.
– Thorn walks towards Marc’s flag.
– Eiryss repositions slightly.
– Alexia moves forward (behind the Black 13th) and pops out 2 Thralls, saving 1 soul.
– One Thrall charges a Bloodweaver and misses
– Second Thrall charges an Argus and misses.
– Anastasia runs towards Kromac.

– Todd thanks PP for nerfing Haley. Pulls in all his Fury
– Bloodweavers all forfeit their actions and walk forward, except for 1 who kills the Thrall that was engaging it.
– Remaining Argus walks towards Haley
– Bloodpack all forfeit their movement and open fire, using their corpse tokens to boost to hit the DEF17 Blazers: Todd manages to hit and murderize 2.
– The Pureblood forfeits movement and sprays another Blazer very, very dead. Warps Spellward.
– Stalker walks further forward in the forest and warps for Prowl again.
– Kromac casts “Primal Shock” through the Argi at a Blazer, boosting to hit, but missing. He camps the remaining 3 Fury. Todd considers popping his Feat defensively, but decides against it.
– Night Witch that wasn’t in the Feat kills a Thrall. 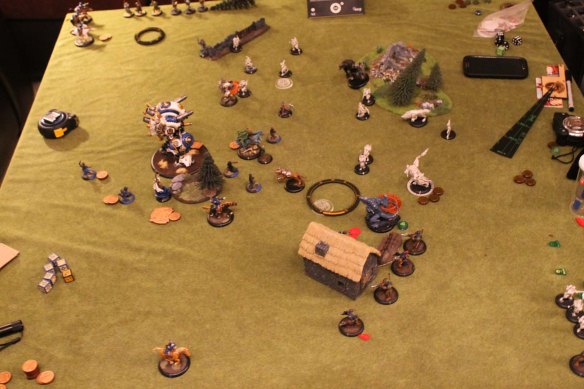 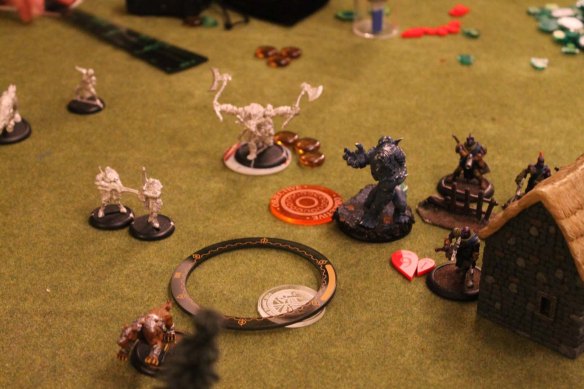 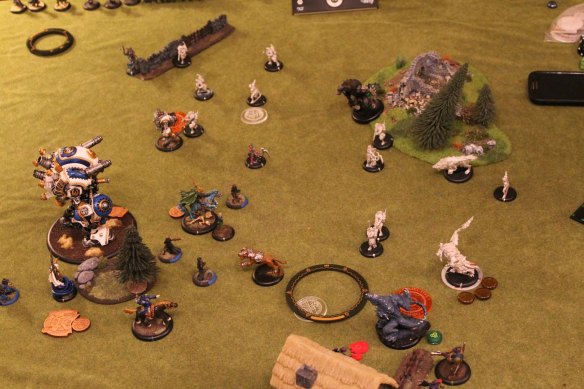 – Upkeep Arcane Shield, give 2 Focus to the Stormwall, pull from the Squire.
– B13 walk forward. Lynch and Watts kill 2 more Bloodweavers: Ryan pumps 2 shots into the Argus, missing once and failing to wound with the other.
– Blazers activate and take shots, killing a Bloodpack and wounding another. Marc forgets to Light Cav
– Alexia rides closer to the Bloodpack and pops out 3 Thralls.
– 1st Thrall charges the Pureblood: misses.
– 2nd Thrall charges the Pureblood: misses.
– 3rd Thrall charges a Bloodweaver, hits and kills it. Alexia collects a soul.
– Thorn repositions to engage 2 Bloodweavers: shield bashes one to death, stabs another.
– Eiryss shoots a nearby Bloodweaver dead.
– Stormwall activates and walks forward. Pumps a shot into Kromac, boosting to hit: hits! Marc elects not to boost damage: rolls boxcars, putting 9 damage on Kromac. Second shot, boost to hit: hits! Rolls boxcars for damage, and Todd transfers 9 points to the Gorax. Drops Covering Fire. Drops a Pod behind the Argus and inflicts a few more points of damage.
– Anastasia activates, walks forward, and Espionages. Nails Kromac: B13 go first, each of them pumping a Brutal Shot into Kromac: misses twice, fails to wound once. Alexia rides over to the Argus, swings, and cripples its Body. Thralls swing on the Pureblood, missing once and hitting once for light damage, and the last Thrall kills another Bloodweaver (giving Alexia her 2nd Soul). Stormwall pumps one more shot into Kromac, but misses. Anastasia takes her Espionage move to walk back 5″
– Haley and the Squire shuffle forward a little.She casts “Decel” again and hangs out behind the forest. 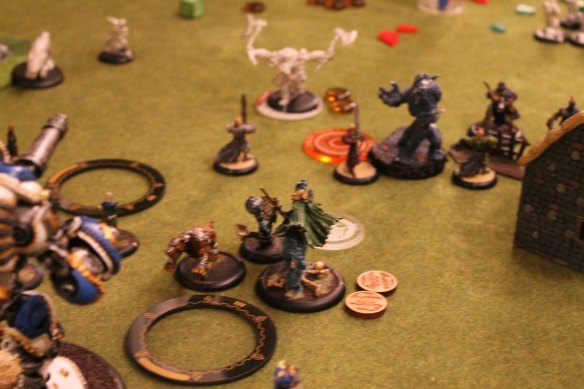 – Todd is… displeased… by the damage rolls on Kromac. Pulls in Fury, leaving a couple on the Argus: it passes its Threshold Check.
– Kromac goes first, pops his Feat. He casts “Lightning Strike” on himself and charges 2 of the B13, hitting and killing Watts and Lynch automatically. He then triggers “Sprint”, and moves back (although carefully still inside the Killbox).
– The Stalker warps for Strength and walks up to Thorn (who is just outside Kromac’s Feat). Boosts to hit a bunch and scraps the light warjack: Sprint triggers for it and it walks back into the forest.
– 2 Bloodweavers charge Eiryss: both miss their attacks.
– Gorax charges Anastasia through the Covering Fire: at Dice-9, takes 3 points of damage. Splatters Annie (autohitting is good!).
– Argus bites Alexia, inflicting a few points of damage with its Combo Strike.
– Bloodweavers and last Night Witch kill thralls engaging the Pureblood.
– Pureblood sprays Alexia, boosting to hit, but misses.
– Bloodpack charge, 2 getting on Alexia and 1 on a Blazer. The 2 charging Alexia manage to kill her, the other misses the Blazer.

– Still in this! 9 min on the clock… and Kromac’s Feat is up. 4 Focus to the Stormwall, upkeep Arcane Shield, pull the last Focus from the Squire.
– Haley goes first, walking towards Marc’s friendly flag. Casts Temporal Acceleration on the Stormwall and TK on herself to get closer to the flag.
– Stormwall walks up to the Stalker and engages it and the Gorax. Swings on the Stalker, boosting to hit, 3 times (killing it), and take 1 swing on the Gorax, inflicting moderate damage. Drops a pod but doesn’t hurt the Gorax further.
– Squire runs between Haley and Todd’s army.
– Ryan puts 2 shots into Kromac for light damage.
– Eiryss manages to stab one of the Bloodweavers to death.
– Tempest Blazers activate: on heavily damages the Bloodpack engaging him with a Brutal Shot, the other misses. Marc again forgets Light Cav moves. 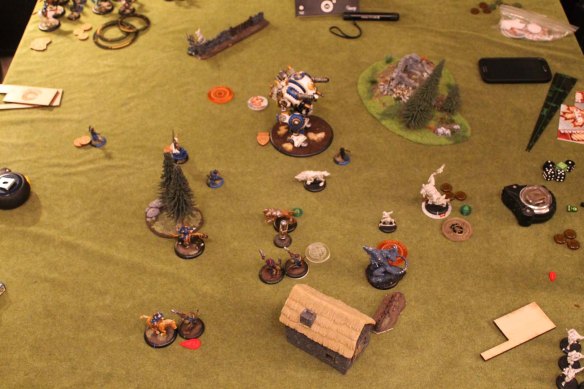 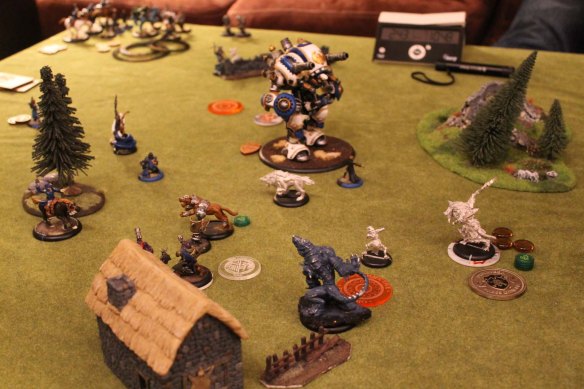 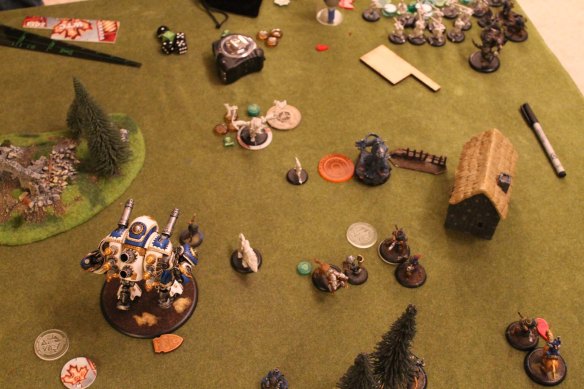 – Pull back in Fury.
– Argus walks up and attempts to spray Haley through the Squire: misses.
– Pureblood warps for Spellward again and walks torwards Ryan: sprays her to death, but misses the Stormwall (!).
– Kromac charges the Stormwall with “Wraithbane” up. Burns through his entire stack of Fury, and leaves the mighty warjack… on 4 boxes (Right arm, cortex, legs)
– Gorax walks up to the Stormwall and hammers it for 2 points of damage (Cortex and Right Arm still operational).
– Bloodpack get Run/Charge orders (Assault and Battery, technically). Arrows ping into the Stormwall harmlessly, but 1 successful charge… leaves in on 1 box (Cortex). 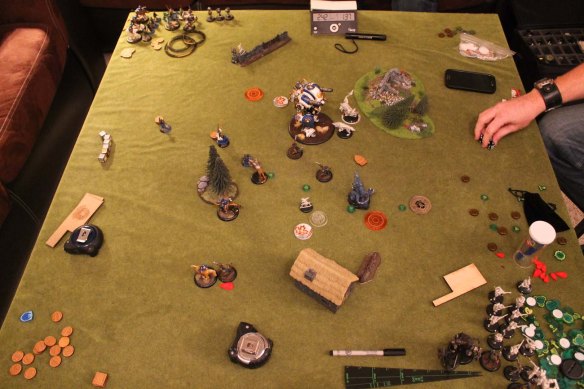 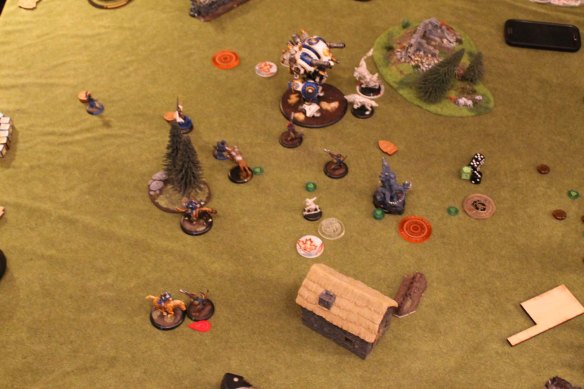 – Allocate 4 to the Stormwall, drop Arcane Shield.
– Journeywoman casts “Arcane Shield” on Haley. Boosts a shot into the Argus, hits, and rolls boxcars for damage.
– Haley runs to be B2B with the flag.
– Stormwall boosts to hit Kromac (needing 8s on 2d6, due to crippled arm). Hits! Leaves Kromac on 4 boxes. Boost to hit the Gorax (needing 7s), hits, and kills it. Buys and boosts one more attack at Kromac, but misses.
– Blazers aim and kill a Bloodpack and the Argus.
– Squire runs to be near Haley.
– Marc scores 1CP for dominating his flag. Marc also has 19 seconds left on his clock… 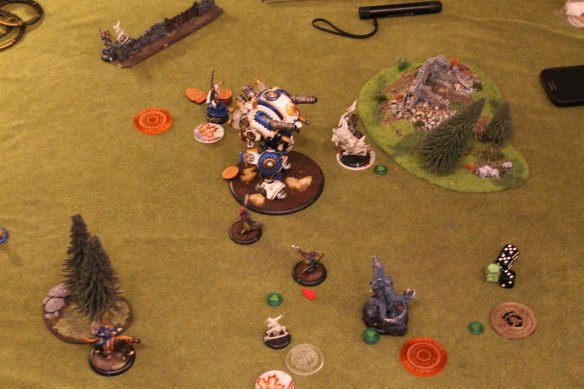 – Kromac pulls in 4 Fury and cuts up to full (leaving him on 1 box).
– Pureblood charges the Stormwall and takes its last box
– Kromac charges into Haley. Hitting at Dice-5 (or so), he burns through his entire stack of Fury, leaving her on 6 boxes.
– Todd ends his turn with 4 seconds left. Marc scores his 2nd CP. 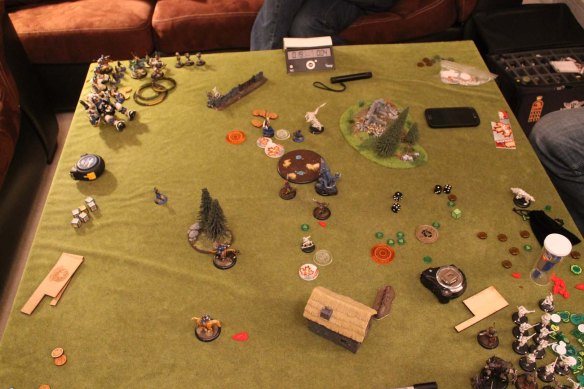 – Marc upkeeps Arcane Shield and sits on his full stack.
– Proper play here: stab Kromac ONCE (boost to hit), and try to kill him (boost damage if hits). Instead, Marc elects to just wait the required 15 seconds.
– Scores another CP, bringing the game to 3-0 for Cygnar.

Todd clocks himself. Victory to Cygnar! 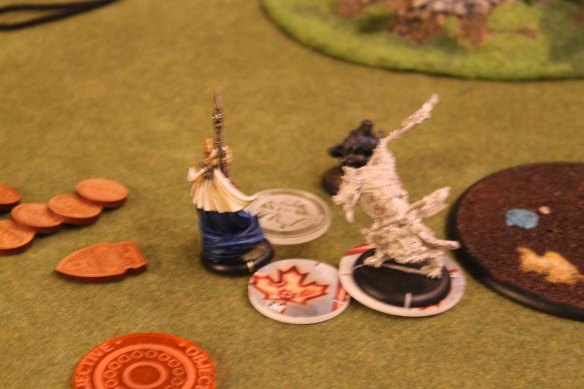 Phew! Close one!
This is a great Haley list, and I’m glad I stumbled across it online. Definitely a lot of potential, and I’m upset I never saw the fantastic synergy between eAlexia and eHaley until now. They make a great team! Also, it is a rare day that a Cygnar army entirely out-threats a Circle army (14″ charging Stormwalls are SO GOOD), and I should’ve been using that to bully the table more than I did.

Todd played a solid game into a really difficult matchup. If he had spent his Turn 5 just choking my flag with bodies instead of trying to kill Haley, he had me on clock (you can only do so much in 15 seconds!). Correspondingly, I unquestionably should’ve put at least a couple of the Stormwall big gun shots into the Objective instead of Kromac to start scoring CPs faster and put Todd on his back foot, rather than trying to wipe out his army.

Anyway! Next week, fewer proxies, but hopefully a game as good as this one! Thanks for reading!