No Podcast this week as Marc has decide to abandon us to go visit his “Brother” in “Vancouver”.

Instead you get to see Darrell and I put minis on the table and throw dice around.

Darrell was playing a pSeverius/Durst pairing and ended up dropping Durst.

Basic Tech:
-Reckoners and Repenters team up to give each other Wall of Steel bonus. Repenters take on infantry and Reckoners take on heavy hitting.
-Hammer Dwarves provide more armour cracking and Reclaimer recycles them to fuel the nearby jacks.

I dropped a somewhat janky Issyria list that I’ve been wanting to try out for while.

This is a variation on PhatAsian’s pVyros double Hyperion list that I have played before and liked.  The pVyros version is super-fun and is an excellent counter to bradigus but this Issyria version is going to have more match-ups it is good into.  The loss of Birds-eye hurts the Brad match-up but its still playable. More importantly it is a much better counter to Lylyth2 who is even more rampant in out meta than Bradigus.

Stacking IR and Disco’s aura plus Issyria’s ability to prevent Pin Cushion means both of your Hyperions are likely living through Lylyth’s feat and then the game can actually start.

None of this is relevant in this matchup of course but its the reason I’m running the list in the first place.

I pick the side of the board without the house in the middle of it.  That would be beyond problematic for my list.

Protip: If Darrell had taken 2nd turn just to make me take the bad side of the table it would have changed this game a lot. I have to split my Hyperions or abandon one of the flags and it’s harder for me to make a nice safe Issyria bunker.

Darrell deploys Durst across from his flag a Reckoner/Repenter pair goes on each side of the house.  Hammer dwarves and reclaimer go opposite my flag on my right flank. 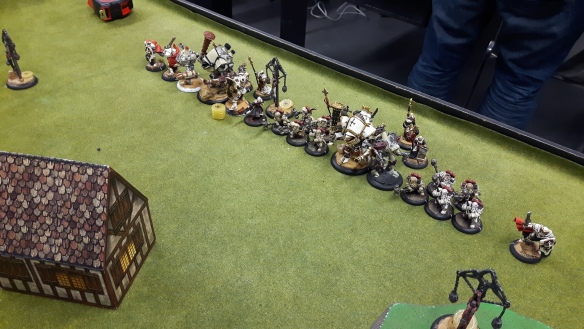 Ret Turn 1
-Issyria give 2 focus to Disco
-Both Hyperions get power boosted and run forward.
-Issyria walks up, puts up Crusaders Call and puts Inviolable Resolve on the Hyperion closer to durst.
-Disco moves up and pops her Aura for +2 ARM against shooting.
-First MHA charges Vilmon and kills him.
-Second MHA charges the reckoner and puts 16 damage on it, crippling its melee weapon and cortex. *Sad Trombone* (for Darrell.  For me that was awesome)

I debated whether or not it was worth sending the second Assassins in so early. My reasoning was that if I could put some early damage on his Reckoner then I’d have a better chance of killing it on Durst’s feat turn.  Clearly the way the damage dice fell it was the right decision and crazy spikes aside I still think it is in this match-up.

-Paladin on left moves up and swings on MHA and misses.
-Repenter spray the other Assassin and kills her.
-Vassal ancillary attacks Repenter to spray the other Assassin and misses.
-On the right flank, Reckoner and Repenter move forward B2B, Repenter sprays Destor Thane doing 3 damage.
-Vassal Enlivens the Reckoner on the right flank.
-Hammer Dwarves run forward.
-Paladin on right moves up and does +5 ARM stance.
-Durst walks up to his flag and pops his feat. (+5 ARM for Battlegroup and warrior models can pawn off hits if they are B2B with warjacks.)
-Eiryss walks into the forest but can’t shoot anything because no LoS. 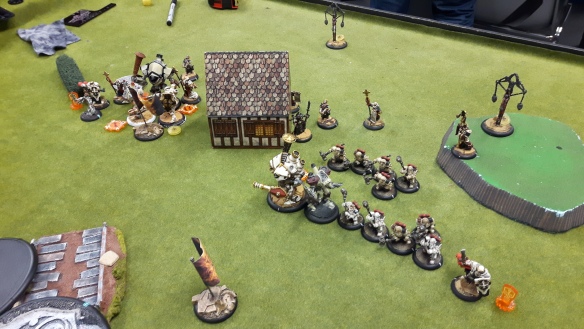 -Issyria pops her feat and Ancillary Attacks a Sparkleburst shot into the Repenter on the right. Does 4 damage to it.
-Right Hyperion get concentrated Power and charges the right Reckoner.  Charge attack cripples the Reckoner’s mace then it enlivens away. Derp.
-Destor Thane charges Paladin on right flank and kills it.  He uses his virtuoso shot to kill the Priest attached to the Hammer Dwarves.
-Disco moves up to get LoS to Eiryss and kills her.
-Other Hype walks up to close the gap to Issyria and contest Durst’s flag and fires a boosted Sparklebust shot into the Reckoner on the left. I get the crit and both choir boys on that side of the board are sucked into the void. The shot puts a bit more damage on the Reckoner.

I’m really annoyed that I forgot the Reckoner was Enlivened.  I got lucky and crippled its Mace on the charge but I wasted 2 focus on the Hyperion that could have gone into attacking the Repenter with better positioning.  I put Hyperion where I did to keep him as far away from the Hammer Dwarves as I could but I’m pretty sure they’re all in range anyway so it was the wrong choice. 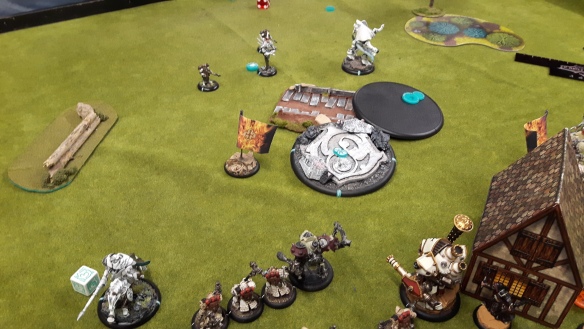 -On the right flank the crippled Reckoner get some focus and swings on the right Hyperion doing some minor damage to it.
-Repenter moves up and sprays Destor Thane but misses.
-Hammer Dwarves charge in 5 get charges on Hyperion doing heavy damage to his right side but not crippling anything, 2 charge the Destor Thane and both miss.
-Repenter on left moves up and attacks Left Hyperion but does little to no damage.
-Paladin kills the Assassin.
-Durst camps focus on his flag. but can’t score because Hyperion is contesting.

-Destor Thane turns around and puts 4 multi fire shots into the Repenter doing light damage.
-Right Hyperion gets concentrated power and does the world’s greatest sweep, killing 7 Hammer Dwarves and buys attacks until the Reckoner is dead. Marxing 1 focus.
-The other Hyperion get an arcanist focus but kills the repenter in front of him with initials, Marxing another focus.
-Disco puts up her aura. 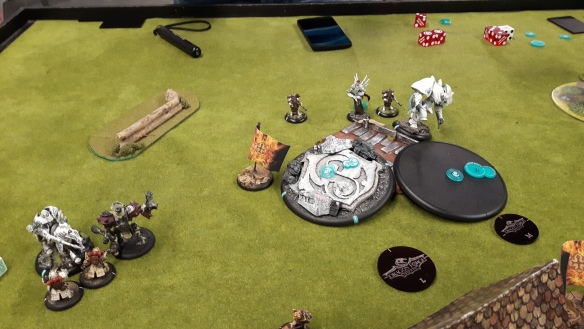 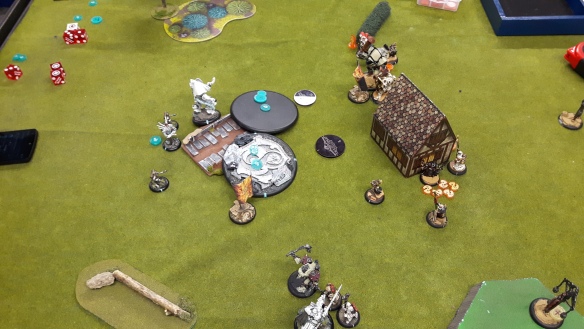 -Last Reckoner moves up to block path to durst. Swinging ineffectually at Left Hyperion.
-Paladin charges Left Hyperion and does very little damage.
-Last 2 Hammer Dwarves kill the Destor Thane.
-Repenter gets focus from Reclaimer and walks up and sprays over Issyria and an Arcanist, missing them both.
-Vassal Ancillaries the shot again and still miss both.

-Right Hyperion gets Concentrated Power and does a power slam on the Repenter which kills it.
-Left Hyperion kills the Reckoner with AA and 1 initial but whiffs on the Paladin.
-Disco gets arcanist focus and kills the Paladin. 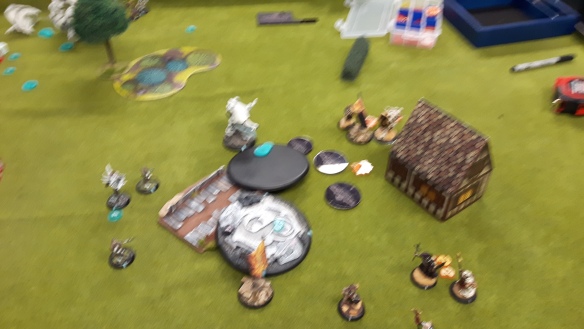 -2 Hammer dwarves charge right Hyperion doing light damage.
-Right Vassal moves up and tries to zap an Arcanist but Issyria cancels it.
-Reclaimer runs to get between Hyperion and Durst. 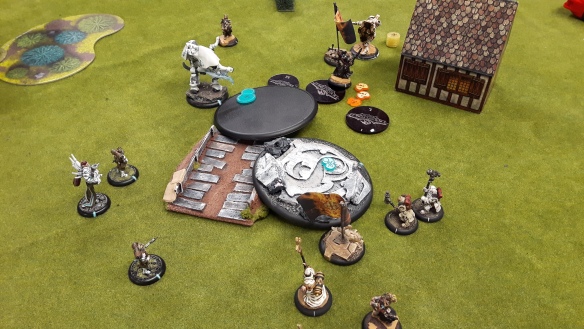 -Ancillary Attack kills the Reclaimer then Hyperion walks forward and pounds Durst into the dirt. 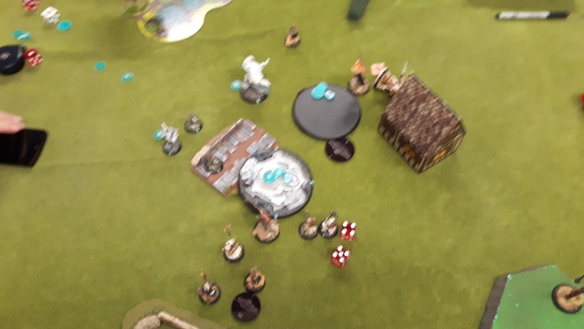 -I never know how much actual effect it has on the game but my dice were hot this game, particularly rolling exactly the columns and damage needed to cripple the maces on both Reckoners on my first attacks.

-Darrell’s dice were also a bit cool for him.  His Hammer Dwarves should probably have wrecked a side of the un-buffed Hyperion they charged but Darrell didn’t get the spikes he needed.

-We discussed Darrell’s list a bit after the game.  His list is built like more of an all-comers list which I suggested was hurting it.  In my opinion (as a non-menoth player) Durst is scariest with a Judicator and/or heavy Warjaks because they are so much harder to kill under his feat.  Darrell doesn’t like Judy with Durst but I suggested if he would take Judy, dropping the light jacks to add 2 templars to the list gives it a lot more beef.

-For my Issyria list everything is solid except the 4 points for the Destor Thane.  I like him in the list but I’m not necessarily sold on him.  He has 15″ threat under CC for his charge and can shoot 10″ past that with virtuoso and scalpel out support models your opponent thought were safe. Other options I might consider are Aiyanna and Holt because they are always good, Electromancers for a bit of crowd control, Eiryss and a Voidtracer, etc.  I’m open to other options.

Thanks for reading! Feel free to leave comments and suggestions for Darrell and my lists.