So for our Anniversary Podcast report, we tossed around a few ideas: a large 3 way battle, a small round-robin tournament between the hosts, even the possibility of doing a repeat battle from Podcast 001, Ossyan vs Nemo3. But in the end, we decided to go full-jenk and do a Highlander Battle. 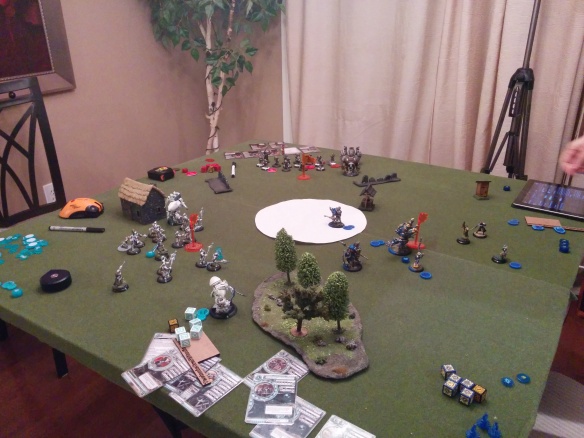 Nick invented a modified scenario for us to battle over, and we stumbled into a few hiccups, but it was still a great game… and surprisingly educational! Plus, with all three of us playing, there’s 3 times the usual levels of bickering! Who would want to miss that?

Also! Contest announcement! Details at the beginning of the podcast and the end of the write-up!

So we decided to do a modified Highlander format game: 1 warcaster, 1 unit, 1 solo, and then warjacks up to 25 points. It’s simple, it’s jenky, and it’s fun! I was thinking to bring a very not-serious list, and so I reached to my Cygnar-favourite, Nemo… but not just any Nemo my friends, but Old Man Nemo himself! I love putting him on the table, but keeping him safe… well, let’s just say it’s difficult and leave it at that, shall we?

Nick was going for a dose of nostalgia with his list, and therefore went with his number-1 squeeze, Kaelyssa. He decided to craft up a fast, hard-hitting list with a couple heavy warjacks with big guns to benefit from Phantom Hunter.

As for Aaron, he decided to be somewhat sportsmanlike and not take Butcher3. Which is nice, because in this kind of game, he would be utterly dominate! Instead, he went with pSorscha… who is also powerful, but a little less so. With that he took Beast 09, and everything after that was optional!

Scenario: one 12″ (theoretically) circle located in the center (theoretically), with flags 6″ out of everyone’s deployment zones. Zone can be controlled or dominated, flags can only be Dominated. 14″ Killbox (which actually made the Cygnar Flag impossible to Dominate).
Deployment zones were 120 degrees apart from the table middle (theoretically), and then 6″ long by 4″ deep. Advanced Deployment was 6″ past that point. 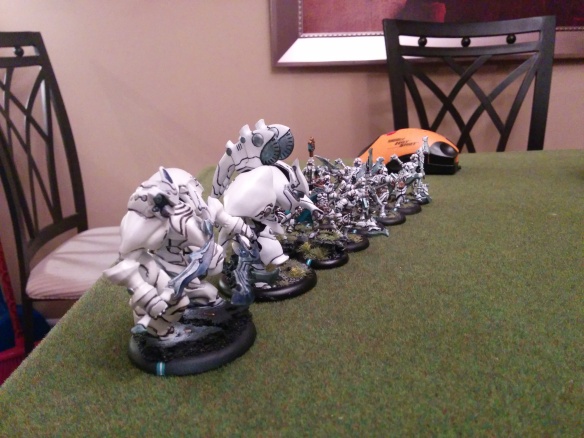 THERE CAN BE ONLY ONE!

I knew that there was almost no way I was going to win by assassination (not with Nemo!) unless I could sneak Thunderhead into Pulse range of either Nick or Aaron’s warcasters… so I had to push for Scenario so that they would over extend and I could then electrocute them!
– Jakes gives 1 Focus to Hunter, Nemo gives 1 to Lancer and Thunderhead
– Jakes casts “Sidekick” on Hunter (gives Power token to Nemo), and then Energizer for 1. Walks forward.
– Hunter runs into zone.
– Lancer runs to the left.
– Nemo casts “Deflection” on himself and “Disruption Field” on Thunderhead. Charges forward.
– Thunderhead runs forward.
– Aiyana and Holt head towards Khador. Aiyana casts “Stealth” on herself, gives Nemo another token.

Aaron… Aaron just wanted to get up the table, man. That’s it. His army (under Bob and Weave) is hellaslow.
– Sorscha gives 1 Focus to Demolisher.
– Demolisher runs forward.
– Sorscha casts “Fog of War” and heads up behind Demolisher.
– Beast runs for free.
– Winter Guard get “Bob and Weave” orders, walk forward.
– Joe gives them “Courage of our Forefathers” (Tough and Fearless).

Nick decided to push hard for the assassination, knowing that he out-threated both Aaron and I with his Halberdiers. We all brought fast lists… Nick’s was just a bit faster!
– Kaelyssa gives 1 Focus to both warjacks.
– Kae casts “Phantom Hunter” on Banshee and then heads towards her flag.
– Houseguard Thane gives “Desperate Pace” to Halberdiers, who Shieldwall forward “only” 11″
– Banshee runs towards forest on left.
– Phoenix heads towards Aaron in an aggressive and obviously insulting way, shouting obscenities about Aaron’s lineage and the likelihood that he is related to his postman.

– 1 Focus to Lancer, upkeep Disruption Field, drop Sidekick, give Hunter 2 Focus.
– Jakes moves forward and casts “Sidekick” on Hunter (for the Power Token!).
– Hunter aims and shoots at Phoenix. Hits, and at Dice-3, inflicts 2 points of damage (boo!).
– Nemo casts “Electrify” on Lancer, and then “Locomotion” for 3 Focus on Lancer (curving around Forest a bit). He then moves out of Killbox and away from Kaelyssa.
– Lancer runs at Banshee after confirming that there was no way to charge it. Toes into forest.
– Thunderhead shuffles up a little.
– Aiyana and Holt go. Holt fires shot at closest Winter Guard: well out of range. 2nd shot hits Demolisher, and at Dice – 13 can’t hurt it. Aiyana gives herself Stealth (and Nemo another Power Token). 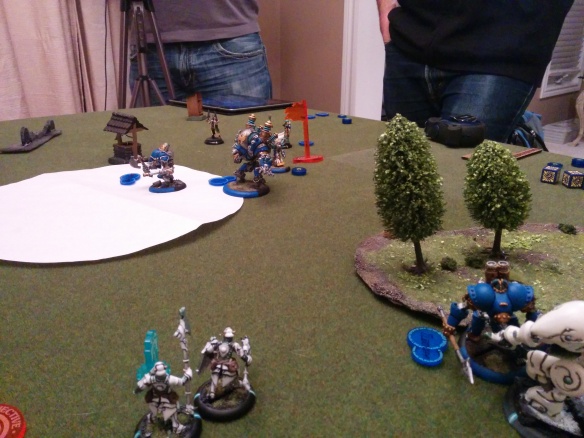 – Kaelyssa drops Phantom Hunter, gives Banshee 2 Focus.
– Houseguard Thane gives Desperate Pace to Halberdiers.
– Banshee walks away from Lancer: takes free strike which scratches the paint and does nothing else. Shoots Thunderhead: misses! Phew!
– Kaelyssa activates. Moves towards Lancer: casts “Arcantrik Bolt”: hits, and at Dice – 7, does a single point of damage (causing Stationary). Pops Feat. Shoots the Lancer, boosts damage, inflicts 5 points.
– Halberdiers Charge. 4 go on the Lancer, 2 head for the Hunter (1 out of range), and 3 towards Thunderhead (1 out of range). First charge hits the Lancer for heavy damage (dies from Electrify), second charge scraps it. 2 charge attacks on Thunderhead inflict light damage, and charge on Hunter misses.
– Phoenix moves towards Cygnar.
– Kaelyssa has failed to get out of the Killbox: Marc and Aaron both score 1CP. 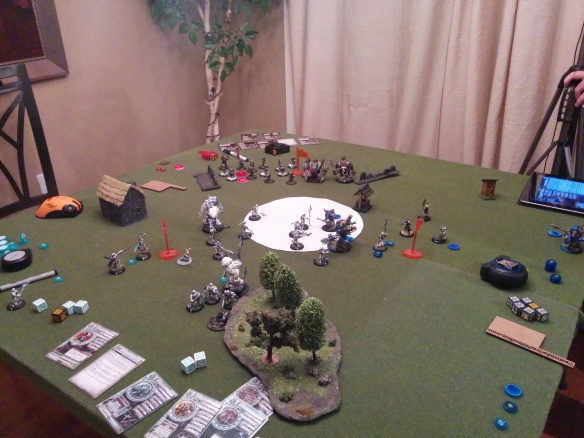 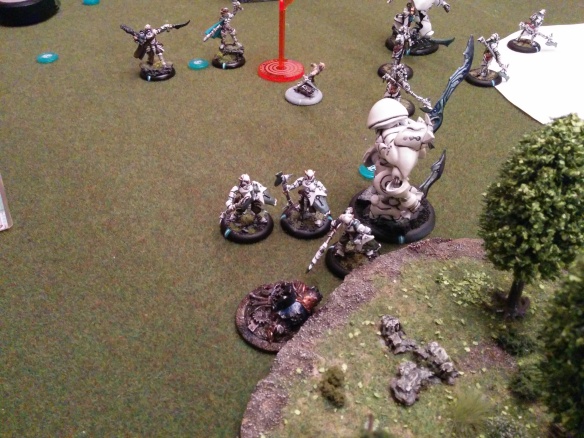 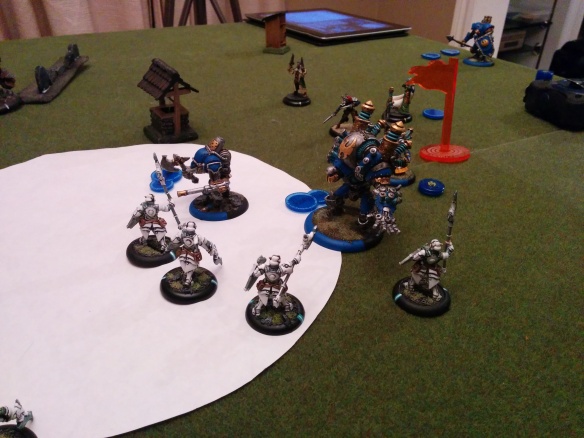 – Nemo gives 3 to Thunderhead, upkeeps “Disruption Field”, Jakes drops “Sidekick”.
– Jakes goes first. Casts “Sidekick” again (gives a Power Token). Takes shot at unengaged Halberdier: hits and kills.
– Realize that I forgot to allocate to Hunter: Nick and Aaron declare “too late” to correct oversight. Compare their fathers to marsupials.
– Nemo activates. Walks away from Kaelyssa. Casts “Locomotion” on Thunderhead for 3. Thunderhead takes a Free Strike as a result, but inflicts no damage. Nemo pops his Feat: boosts damage on Beast and inflicts a few points (and disrupts), and then boosts damage on the Demolisher but at Dice-11 fails to wound (so no Disruption). Uh oh.
– Thunderhead walks towards Banshee but tries to stay out of melee: takes another Free Strike which inflicts light damage. Uses “Pulse” attack that vapourizes all Halberdiers in range (about… 7 or 8 of them) and inflicts light damage on Banshee. Buys a shot at Banshee and boosts damage: crappy damage roll. Buy another shot, no damage.
– Aiyana and Holt activate. Aiyana attempts to Kiss Demolisher: out of range by an inch. Holt shoots it anyway, but can’t hurt it.
– Hunter backs up and takes a shot at Phoenix: forgot it has Stealth and so the shot misses. 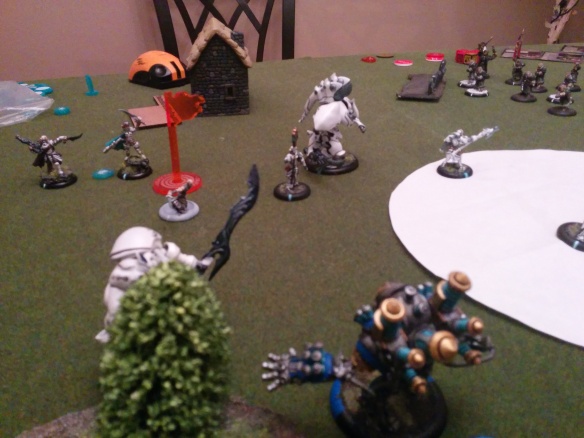 – Aaron decides time to remove Marc from the contest.
– 2 Focus to Demolisher, camps the rest.
– Sorscha goes first, walks into CTRL range of Nemo, pops Feat. Forgets to take her shot.
– Demolisher walks towards Nemo, easily getting range. First shot hits and does Dice+1 damage, boosting: vapourizes Nemo.
– Joe gives WInter Guard Tough and Fearless again. Shoots a Halberdier to death.
– Winter Guard move up and take CRAs on the Phoenix (Stationary from Feat). They inflict enough damage to drop the Shield and scratch the metal (about 9-10 damage total).
– Nick realizes he’s forgotten about Phoenix Field every turn thus far.
– Aaron scores another CP for controlling the zone, bringing the Score to 2-0 for the players still in the game. 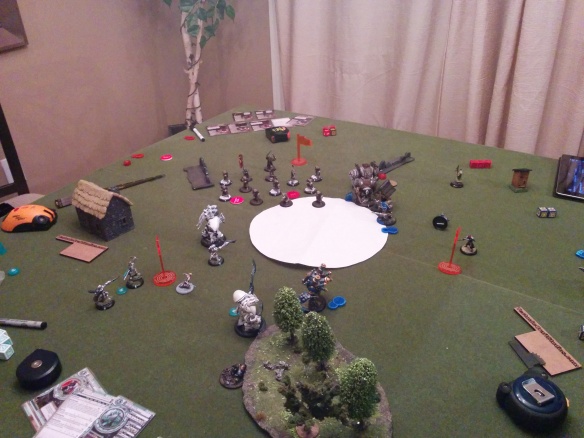 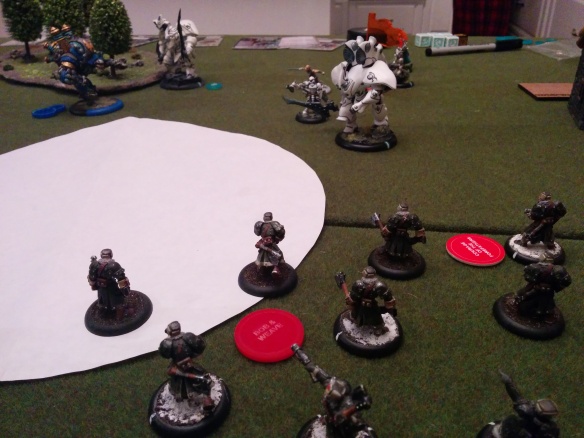 – Phoenix gets 3 and uses 1 to shake Stationary, Banshee gets 2.
– Kaelyssa moves out of Killbox.
– Remaining Halberdiers charge Winter Guard: kill 1, another Toughs.
– Phoenix moves up to Winter Guard and uses “Combustion”: hits 4, kills 1 and 3 Tough. Buys attacks, but Aaron Toughs both times.
– Banshee moves towards Beast, but Beast is at the opposite side of the “12 inch” zone and so Nick assumes he is out of range. Shoots/Slams a Winter Guard into another, killing 1 and the other Toughs. 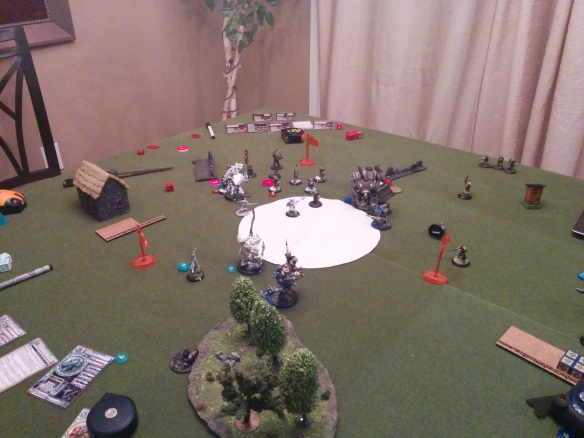 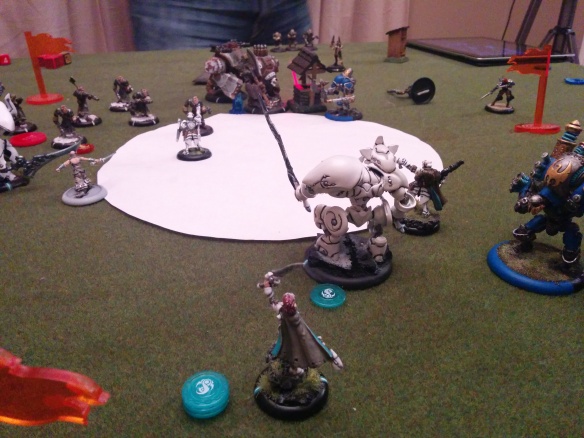 – Aaron is on 2CPs with the possibility to score 3 more, but decides it’s too risky. Gives Beast 09 1 Focus, 1 to Demolisher, camps the last 4.
– Burning Winter Guard both die.
– Sorscha casts “Boundless Charge” on Beast 09. She camps her last 2 Focus, moving into Cover.
– Kovnik Joe gives Winter Guard boosted hit rolls.
– Winter Guard do a big CRA into Phoenix: hits and inflicts light damage. Kill the last few Halberdiers in the zone.
– Beast charges Houseguard Thane, easily making distance. While measuring to see if in melee range of Banshee, we realize that the zone is ONLY 11″ wide! Oops! Either way, Beast splatters the Houseguard Thane effortlessly.
– Zone is cleared, Aaron scores 1 more CP to bring the score to 3-0. 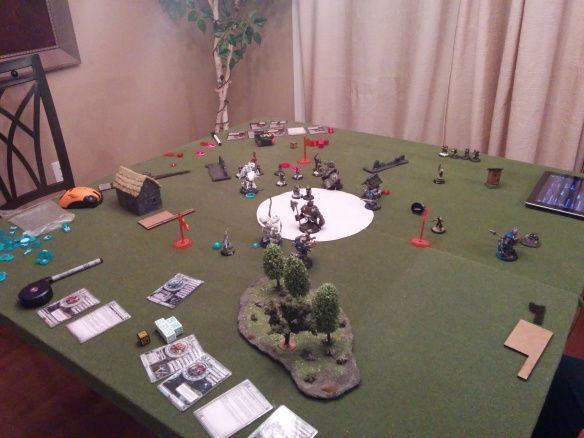 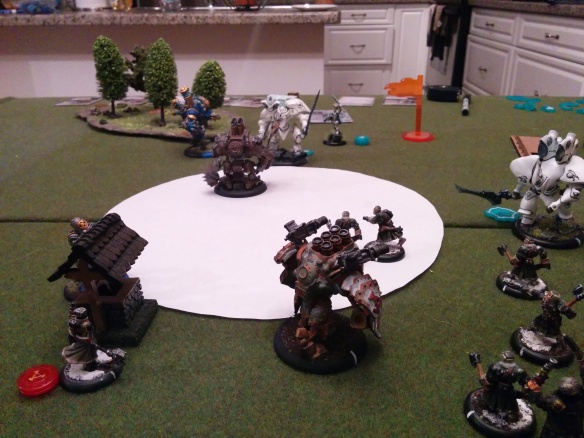 – Aaron has too many options with which to kill Kaelyssa and immediately surrenders rather than having to pick one.
– Gives 3 Focus to Beast and 2 to Demolisher. Camps 1.
– Demolisher moves up and punches Phoenix to death.
– Beast activates, uses “Imprint”, moves over to get Kaelyssa and Banshee in melee range. Threshers: hits and splatters Kaelyssa. 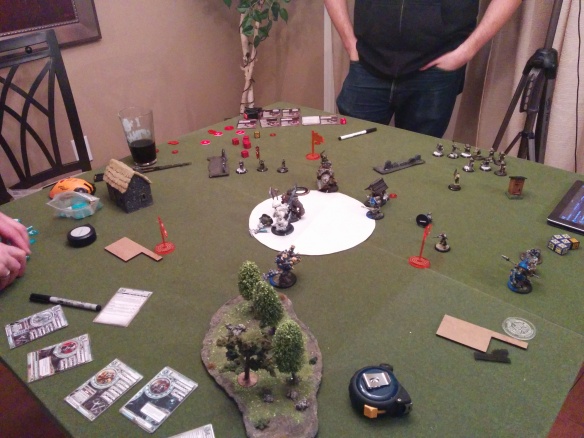 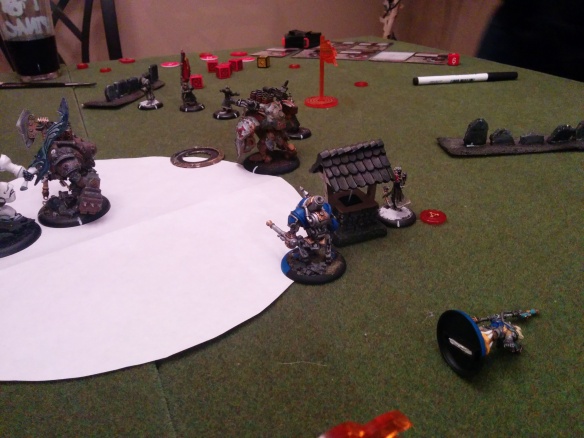 Silly? Yes. And the scenario had a few problems (not least of which were the 11″ zone and how far off-center it was… placing both Aaron and Nick far closer to me than they were to each other). But a lot of fun, and every educational!

My choice of Nemo1 was silly, and if I had to take him I should’ve brought the TAC (just for the 3 Power Tokens ever turn, and immunity to Sorscha’s ranged assassination, since her Feat requires LoS). Also a mistake to not Trample Thunderhead straight at the Banshee with 5 Focus: could’ve disrupted it at least, possibly crippled it, and if Aaron hadn’t killed me on that turn, Nick was unquestionably going to scrap THead. Oh well!

Anyway! Thanks for listening!

That’s right! We’re having another giveaway contest, folks! This time, THREE lucky winners will be selected from the people who comment on either in this thread or on our Facebook page! In order to be eligible, please mention either the first Combo Smite podcast you listened to, or your favourite Combo Smite moment! Was it that time that I let Kraye lose to Aaron because I forgot about how to score points? Or maybe that time that Nick used Ossyan’s Feat a little too aggressively? Maybe it was that game between Aaron and Nick in which Nick wrecked everything Aaron had, and then lost when Vlad walked up to his warcaster and smote him?

You get 1 entry for commenting here, and another if you comment on our Facebook post for this report… giving you up to two chances to win a prize!

Winners will be selected next Monday, and notified on our Facebook page! Thanks folks!

34 thoughts on “Podcast 051 – Anniversary Podcast! Highlander Format 3-Way Battle, and Giveaway Contest: Our Birthday, We Give You Presents!”