Huh. So my noble cohosts seem to have forgotten that along with a podcast (that we do weekly), we also need a write up to post WITH the podcast. Seems like a silly oversight… Overly Verbose Battle Report Writer to the rescue! 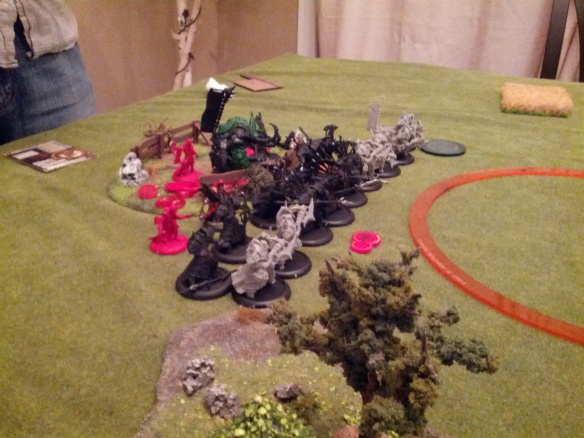 Additionally, the winners of our giveaway contest are announced! But not here, that’ll be done on Facebook tomorrow afternoon. A huge thank you to everyone who entered, and we hope the prizes are enjoyed!

For the last year we’ve been running a small “House League” among our friends (Kassem, Darrell, Todd, Gaven, Adam, Nick, Aaron, and me). It’s drawing to a close, but we’re still a few games short each. In order to get the full season finished, we agreed to shrink down to 25 point games.

Nick is not a fan.

No, seriously. Nick *hates* 25 point games. Like, a lot. So this week the game was between Aaron’s Khador and Kassem’s Skorne as Nick refused to play at 25 points (instead practicing at 50 points for a tournament we played on Saturday… let me just say that Nick is a wiser man than the rest of us!).

Anyway, here’s Aaron’s list, as near as I can make it out to be!

A solid 25 point list… lots of weapons and bodies to benefit from Irusk’s impressive spell list. The Doom Reavers are, in my opinion, a little bit of a stumble: Irusk should have another target for Battle Fury (a unit of Pikemen, perhaps? Or Winter Guard Infantry?), but what do I know?

Simple, straight forward, elegant. Very Kassem-esque. Don’t quote me on those unit sizes, though… I’m sure Kassem will post the correct list soon and I’ll update these afterwards!

Initiative was won by Kassem, who elected to go first, and Aaron took the side of the table with more open space for his troops to move through.

The Scenario was “Supply and Demand”, with a Friendly Objective for each side that gives free charges to warbeasts/warjacks, and prevents your opponent from dominating the zone for as long as it is alive. Not a problem for Xerxis with his 10″ CTRL, but impossible for Irusk to avoid.

Kassem stuck Xerxis in the middle of the table behind his Cetrati and next to his Gladiator. One unit of Incindiarii went to either flank. Boom! Done. 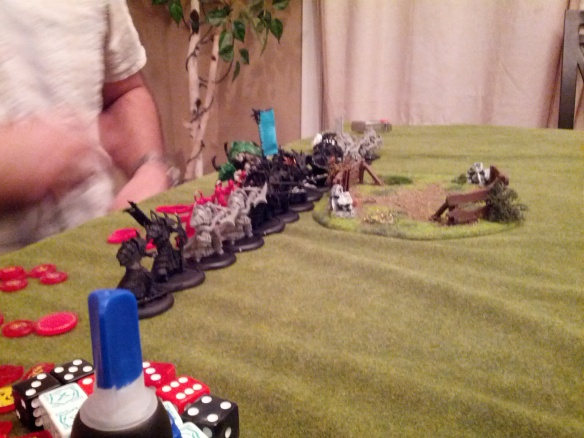 Aaron dropped the Doom Reavers in the middle of the table, with the Assault Kommandos behind them, the Great Bears to the right side near Behemoth and Irusk.

One thing you CAN say about 25 point games (which I love, despite Nick hating them… did I mention he hates them? Because he *really* hates them) is the deployment is quick to write up! 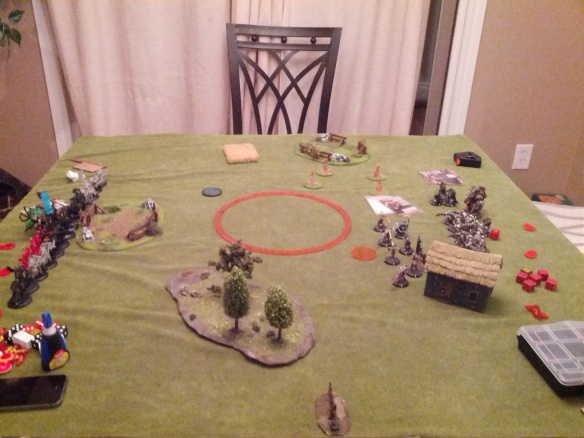 (from this point on, I’m copying in Kassem’s somewhat brief game notes… hopefully clear for everyone, though!)

Xerxis gave himself the battle plan “Press Forward” and cast “Defenders Ward” on the Cetrati and Fury on the gladiator, then advanced forward.  All the units ran up and the gladiator riled and ran. 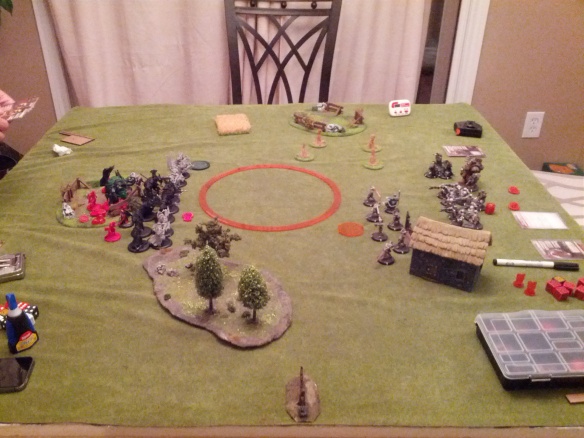 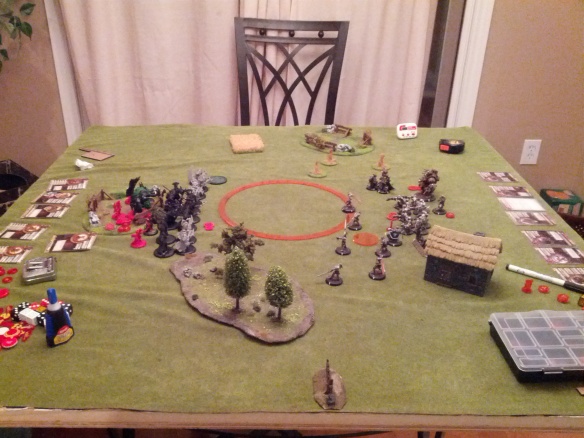 Skorne turn 2
Xerxis up kept defenders wars and dropped fury.
First unit of incindiarii advances up a bit and shoots at the doom reavers. They kill 1 and set one on fire.
Second unit of incindiarii advance up and take shots at the great bears and miss everything.
Xerxis issued press forward on the cetrati and advanced up and cast inhospitable ground.
Beast handlers run and gladiator rules and runs.
Cetrati advance up in shield wall. 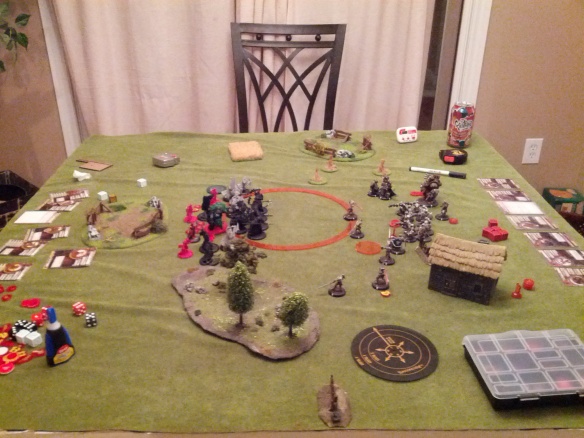 Khador turn 2
None of the fire expired and did no damage :(.
Aaron up kept superiority and iron flesh.
Doom reavers and great bears advance up a bit.
Torch advances up.
Assault kommandos advance in shield wall into the zone and take a shot at one of the cetrati, and realizing he couldn’t even scratch the paint, thus crushing his morale.
Irusk advances and feats. 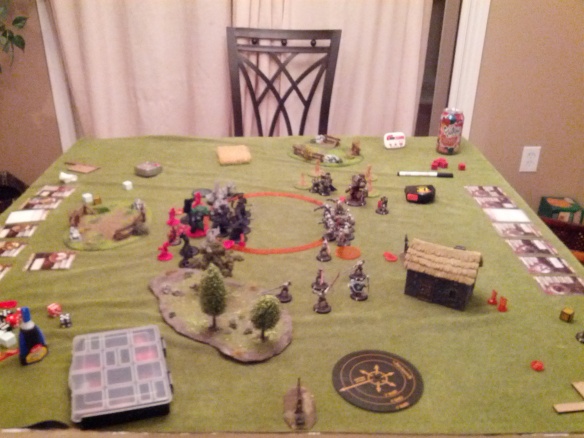 Skorne turn 3
First Incindiarii unit shoots at the doom reavers. They kill one, one toughs but he and the ua are lit on fire.
Second unit of incindiarii shoot at the great bears and kills the one that give path finder, forces one to super tough, leaving two great bears on fire.
Xerxis cast inhospitable ground, gave press forward to the cetrati, and advanced up a bit.
The cetrati advanced up in shield wall to engage the assault kommandos and killed one doom reaver and forced an assault kommando to super tough.
Gladiator riles and runs and beast handlers run.

Khador turn 3
No damage from fire rolls again 🙁
Drops iron flesh and upkeeps superiority.
2 Doom reavers advance and engage a cetrati and the other one walks up. The ua does a spray and hits 4 cetrati. They all do no damage.
Torch advances up and does a spray and hits 4 cetrati and does no damage.  Takes two swings at one and does 1 damage.
Irusk casts battle lust on the assault kommandos.
Assault kommandos move in shield wall to engaged more cetrati and take swings. They do 5 points of damage to 1 and 1 point of damage to another.
Great bears advance onto a cetrati and do another 5 point of damage combined on him. 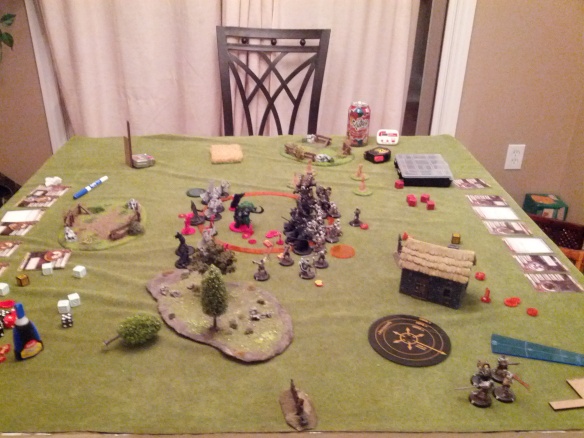 Skorne turn 4
Xerxis upkeeps defenders ward
Incindiarii kill all but one doom reaver.
Xerxis casts fury on himself, pops his feat, and charges the torch. He wrecks it with his remaining fury.
Beast handlers charge at stuff but fail a command check from a doom reavers terror
Cetrati take swings at the great bears and assault kommandos. Great bears tough and 3 kommandos die.
Incindiarii on the left take one shot at a great bear which scatters into nothingness, the rest do nothing.
Gladiator riles and advances. 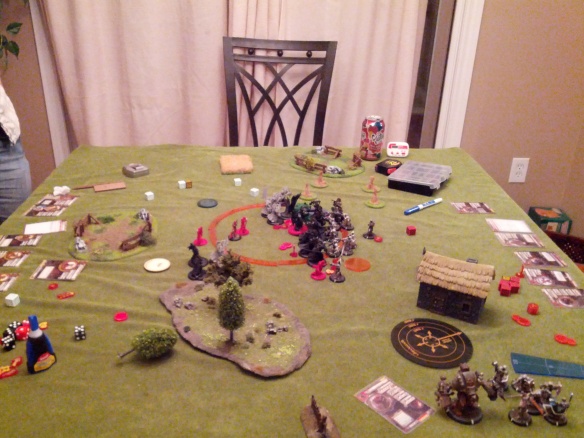 Khador turn 4
The great bears and doom reaver succumb to the flames this time.
Irusk advances and shoots Xerxis twice, boosting damage on both doing 8 points of damage. He then hit him with grind and does another 6 damage.

Skorne turn 5
Xerxis dropped fury and cut for one fury.
Gladiator tries to be useful and double hand threw a cetrati at irusk but missed and scattered too far.
Xerxis charged irusk and did 13 points of damage. I was then going to cast defenders ward on myself and then have the incindiarii light us on fire and hope it killed irusk, but logic kicked in and Xerxis took another swing and finished him! 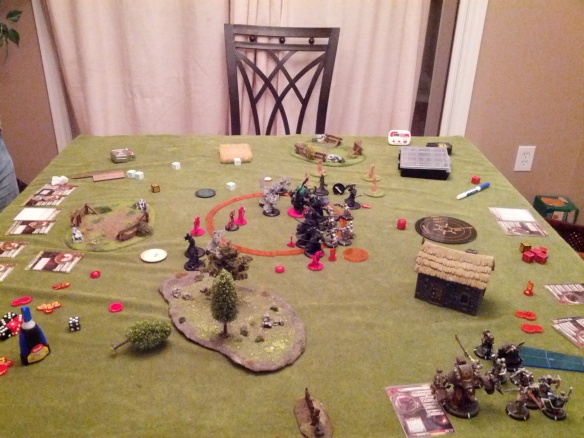 Not a lot to add, although I do apologize for Kassem’s lack of punctuation. And spelling. And capital letters…

I think Aaron came surprisingly close to dropping Xerxis, and a little bit of bad luck stopped him… but he had way more luck than he deserved in the early game. Saxon Orrik and eEiryss in this list instead of the Great Bears, and I think Kassem’s army is toast… but at 25 points, taking that much support is a tough call!

Anyway, thanks for reading! Remember to check out our Facebook page later today/early tomorrow for the contest results, and keep your eyes out for another podcast coming on Wednesday when we talk about our tournament results from Saturday!