This week for the podcast, Todd decided to get some practice in with the original Circle Power Warlock himself… eKrueger! And because I now no longer need to worry about Bradigus, but I’m still locked into fielding my anti-Bradigus Kraye list… I figured it was a good chance to see if he has any game whatsoever in this matchup! 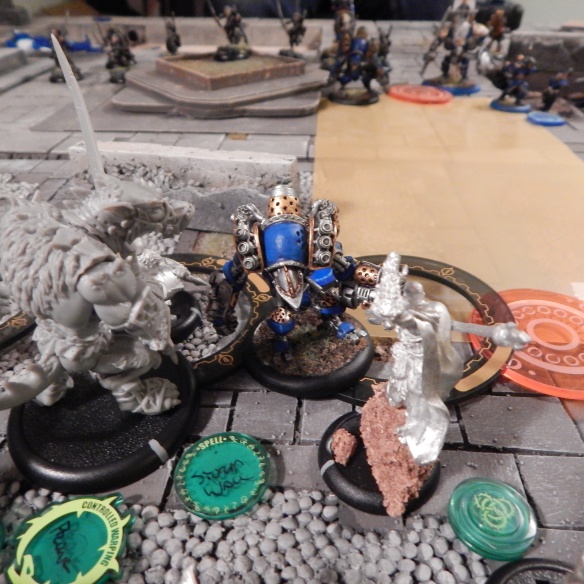 Having played the game now, I can say, with authority; Maybe!

Todd won initiative and went first. I took the side of the table with the forest and wall to deny them to Todd.

Todd placed one griffon on each flank. Ghetorix went to my left, the Stalker to my right, and 1 Blackclad Wayfarer went to each flank as well. The Druid Wilder, Krueger, and the Gorax went in the middle.

Eventually, the Stones and Druids were Advanced Deployed in the middle of the table, along with the Gallows Groves.

I then placed my Nyss opposite the Stalker, my Stormblades opposite Ghetorix with both Stormclads near the middle with Kraye. The Minutemen went forward and central, with Eiryss flanking hard right (mostly to keep her away from my own warjacks… learned THAT lesson the hard way!) 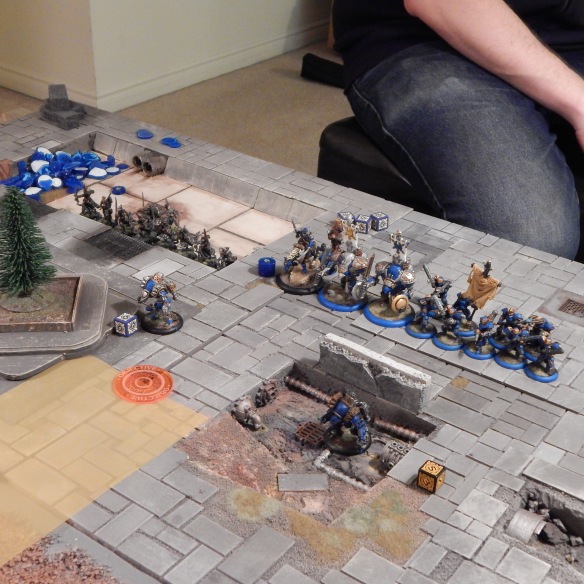 With that, it’s go time! 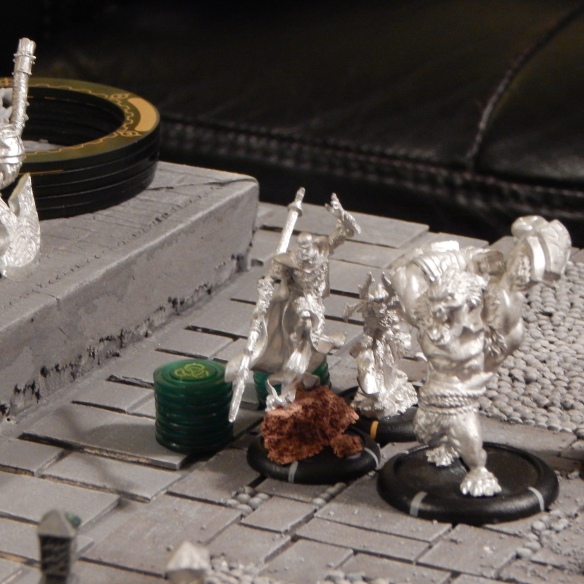 – Todd activates his Druids, walks forward and pops smoke (near the objective)
– The Gallows Groves shift forward into the clouds to get Stealth
– Stalker warps for Prowl and runs into Forest.
– Shifting Stones all shift around, forward and out
– Ghetorix riles and moves into the unpainted unit of Stones
– Krueger casts “Stormwall” and moves forward
– Una casts “Watcher” and moves forward
– Everything else moves, runs, or teleports forward 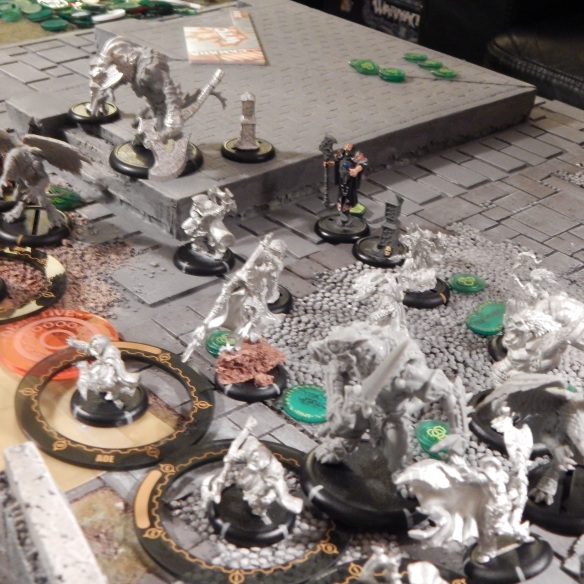 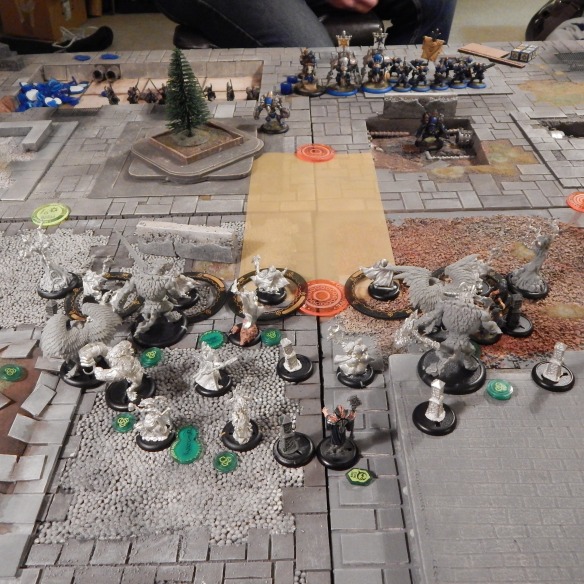 – Kraye gives 3 Focus to a Minuteman, camps the rest.
– Kraye goes first. He puts “Full Tilt” on the MInuteman (for -1 from the Objective) and then backs up a bit.
– The Minuteman walks and Leaps forward, landing B2B with Krueger. He Flak Fields, rolling dice-3 on Krueger… and gets exactly a 3, doing no damage. He does kill a Druid, though. Marc boosts his initial punch, hits, and boosts damage, inflicting 5 points that Krueger decides to keep. Second punch swings wide.
– Marc activates the Nyss next. They move forward and manage to kill a Druid a with lucky shot (at extreme range)
– Stormclads both run forward and spread out
– Stormblades run forward and in front of the Stormclads
– Rhupert puts “Tough” on the Stormblades
– Eiryss moves up and shoots a Tree, forgetting it has Stealth and missing by a country mile.
– Squire runs in front of Kraye, because you can never be quite far ENOUGH away from Circle warbeasts…

– Todd starts by looking far too happy for Marc’s comfort and pulling back up to full Fury. Una upkeeps “Watcher”
– Druids activate, move forward, and pop Clouds and Anti-magic.
– Gorax charges Minuteman: after filling up on Fury, leaves the Minuteman on 2 boxes (left arm and legs)
– Stalker warps for Strength and charges Minuteman. Scraps it with ease.
– Ghetorix gets teleported forward
– Gallows Grove on Marc’s left teleports forward, close to Stormclads (Marc starts to feel nervous)
– Rotternhorn Griffon on left gives “Accelerate” to nearby Blackclad Wayfarer
– Blackclad moves (or is teleported?) forward, sprays over 3 Stormblades, and kills 1 (while 1 Toughs). He then uses “Accelerate” to teleport back to a Shifting Stone. Neat trick! (Marc gets more nervous)
– Krueger activates. He arcs “TK” through the Gallows to pull a Stormblade out of the way. He then TKs the Stormclad out from behind the objective. He then casts Gallows on it, pulling it forward 3″… and runs out of Focus at this point with my Stormclad safely out of Ghetorix’s Reach. In desperation, Todd pops Krueger’s Feat, catching 2 Stormblades and the closest Stormclad. 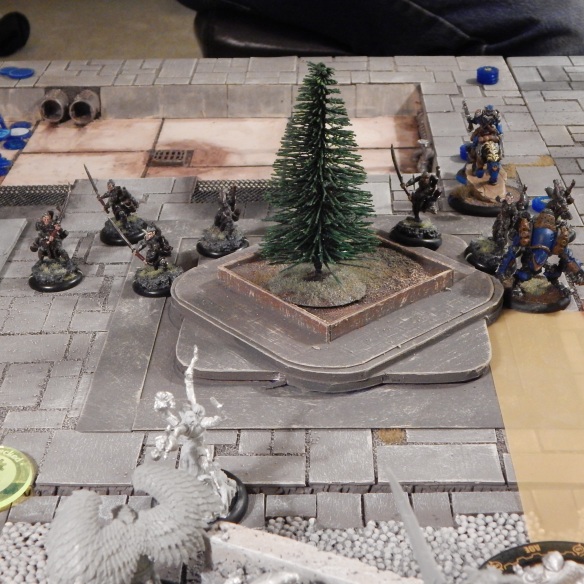 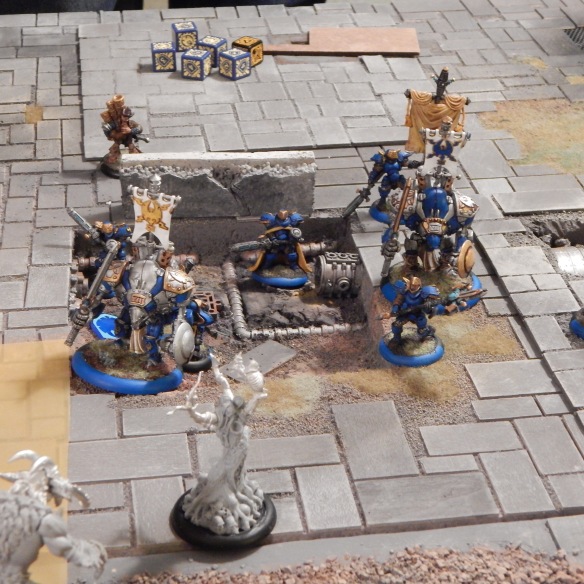 – Marc allocates 2 Focus to both Stormclads (JUST IN CASE!), and we’re off.
– Kraye goes first, declaring a “Ride By Attack”. Moves within 6″ of Stormclad hit by Feat and casts “Full Tilt” on him (for -1 from Arcane Wonder). Pops Feat, and then takes 2 shots at left Gallows Grove: destroys it on the 2nd hit. Finishes movement behind the forest again.
– Nyss walk forward, 3 getting on the other Gallows Grove, the rest spreading out somewhat. The three engaging the Gallows Grove fail to destroy it (BOO!), leaving it on 1 box: I send a 3-man CRA into it (since it can’t be engaged) to polish it off. The rest fire a CRA into the Shrieking Griffon on the right, doing light damage.
– Eiryss moves up and pings the Shrieking Griffon, doing 5 damage and crippling its Body.
– Stormclad hit by Krueger’s Feat walks up to Ghetorix and goes to town, laying into hiim with everything its got. Leaves Ghetorix on 4 boxes.
– Stormblades Charge: Their Assault Shots need 11s to hit and, unsurprisingly, all miss, but their melee attacks are hitting on 7s and the first of the 2 that successfully charged him are able to put Ghetorix to bed.
– Rhupert gives “Tough” to the Nyss this round. 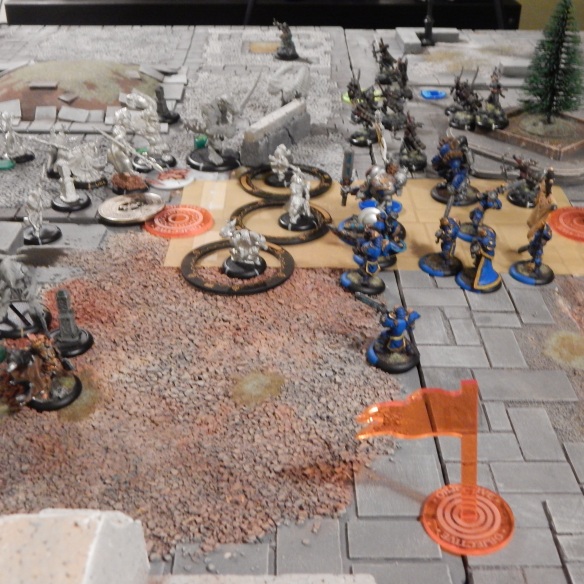 – Todd starts with a loud curse, and cuts for 1 Fury
– Gorax puts “Primal” on Stalker
– Druid Wilder puts “Lightning Strike” on Krueger
– Krueger TKs one of the Shifting Stones forward to get it around the Feral. He then Charges a Stormblade, easily hitting (after boosting) and killing it. He then Sprints into B2B with the left flag
– Stalker is Teleported (after a quick repositioning of the Stonekeeper to get everyone back in Formation) up to Objective and my rear Stormclad. Stalker effortlessly scraps the Stormclad with enough left in the tank to destroy the objective (which inflicts 5 points of damage on the Stalker from Electroleap from the hit that didn’t destroy it).
– Right Griffon moves up and shrieks on 3 Nyss, killing 1 and Toughing 2.
– Una moves up and uses her 3 shots: first kills, 2nd two both hit other Knocked Down Nyss, but he toughs both times.
– Other Griffon moves up and shrieks, killing a few Stormblades (leaving me with 3)
– Blackclad on left moves up and sprays the Stormblade Standard into a fine paste
– Both unit of Stones shift forward in “Operation Speedbump” 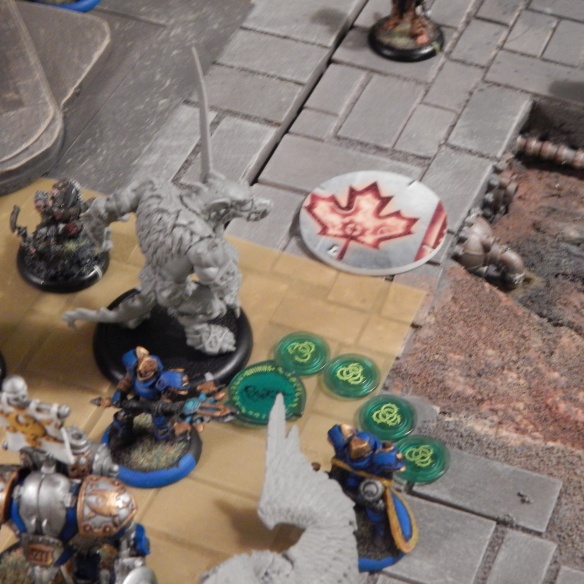 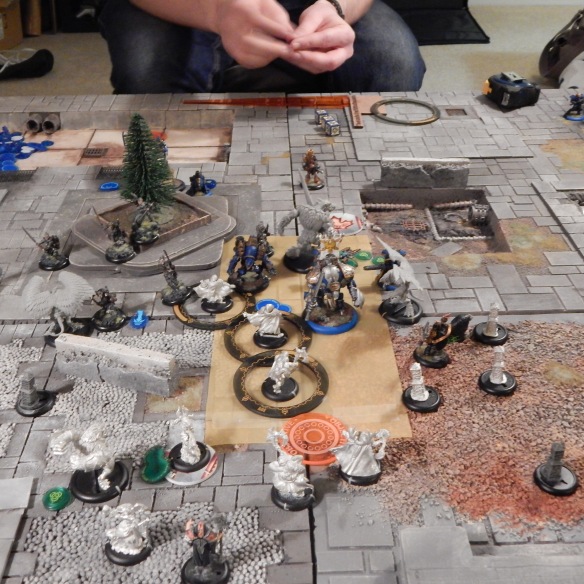 – Marc decides he doesn’t want to lose the game this turn, and tries to figure out how to do that. 2 Focus goes on the Stormclad, upkeep “Full Tilt” on the Stormclad, and we’re off.
– Minuteman goes first, moves up to B2B with the two closes Druids and Flak Fields, sadly only killing 1. I use my initial attacks to punch the other Druid, but miss twice.
– Stormblades shuffle around to get on the Shrieking Griffon, hitting twice and inflicting heavy damage.
– The Stormclad activates and shuffles around a little to get both the Stalker and the Griffon within Reach. It goes through its stack of Focus, killing both the Stalker and the Griffon.
– The Nyss move forward and pump a CRA into Una, hitting and killing her. 3 others are still engaged by the Griffon, who swing and mostly miss but do a few points of damage.
– Eiryss moves up and pumps a shot into the Gorax, hitting for a few points of damage.
– Kraye does a Ride By Attack, moving up, taking a shot at Krueger (out of range), and then backing up behind the forest.
– Rhupert goes last, and runs up to contest Krueger’s flag.

The Score is still 2-0 for Circle.

– Todd is running out of steam, but may still be able to pull this off… Krueger pulls off a Fury from the Gorax, leaving 2 on it. It fails its Frenzy attack, and Charges the closest model… one of Todd’s Shifting Stones(!!). Sadly, the Gorax fails to wound the stone (boo!).
– The Druids move around. The Officer casts its big AoE  at the Stormclad, pinging it for a few points of damage and killing a Stormblade.
– The Blackclad on the left moves up and sprays over the remaining Stormblade and Stormclad: kills the Stormblade, but misses the Stormclad.
– The Stonekeeper moves up and hits the Stormclad, trying to knock it down… but doesn’t get the Critical. It fails to wound.
– Krueger activates, moves up to engage Rhupert, and manages to kill the piper. He then TKs himself back behind the flag.

Todd scores another CP, bringing the score to 3-0 for Circle! 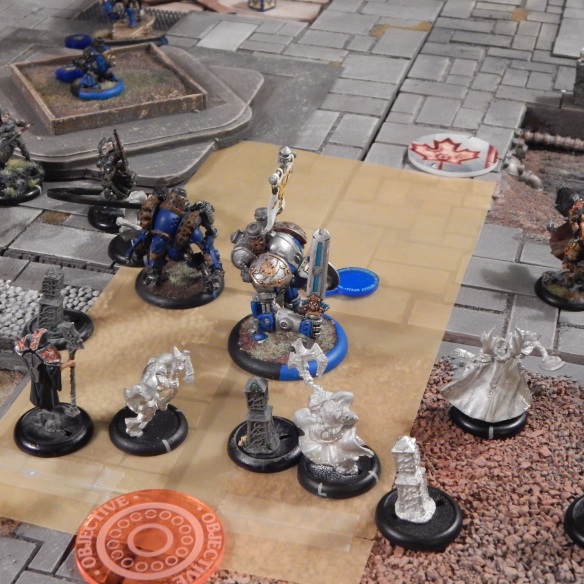 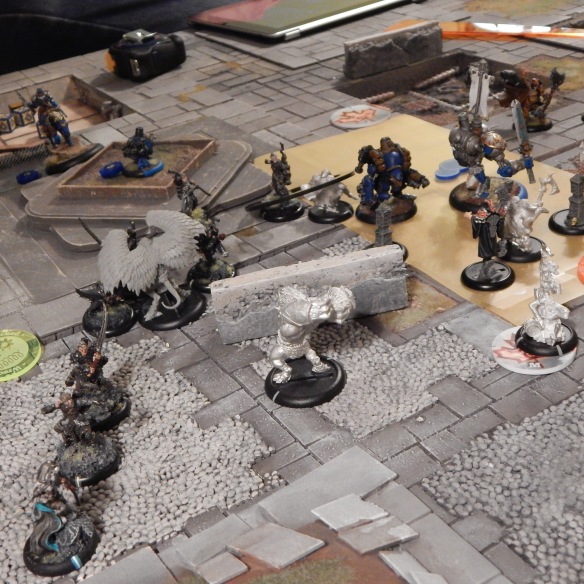 – Marc decides he doesn’t want to lose this turn either, and so allocates a full 3 to the Stormclad and 1 to the Minuteman. He upkeeps Full Tilt again.
– The Minuteman goes first, killing 1 of the Druids engaging the Stormclad.
– The Nyss go next. They can’t CRA into the remaining models engaging the Stormclad, so they just kill the Druid Wilder and kill the Griffon.
– The Stormclad goes next. He Tramples over the Druid Officer and 2 Shifting Stones, taking 2 Free Strikes (from a Druid and the Blackclad). The Trample fails to kill anything, but on the flipside both Free Strikes hit and fail to wipe out the Cortex (unusually, I would say…). The Stormclad buys an Attack on Krueger, boosts to hit… and hits! I roll Dice+5 damage, inflict 9… and do just enough to drop the evil warlock to the dirt.

That went pretty well, all things considered. Todd over extended Ghetorix, and I was able to capitalize on that pretty well… although it wasn’t a “done deal” even after the mighty werewolf chieftain was defeated. Still, managed to keep Kraye safe, managed to take out the important pieces, and I think I had this game sooner or later (my Nyss were the heaviest hitters on the table after my Stormclad, and they would happily chew through Todd’s entire army without Krueger’s support!).

Still, I won mostly because Todd is still learning Kreuger more than anything. But hopefully some good lessons for all of you out there!

Thanks for listening, and remember we always welcome questions, comments, criticisms, and feedback of all colours!