So despite the fact that I’ve done the last 2 podcast games in a row, it didn’t occur to Nick that *maybe* he should take pictures and notes for his game this week… and so our good listeners get to learn EVEN MORE about how much I suck with Siege! 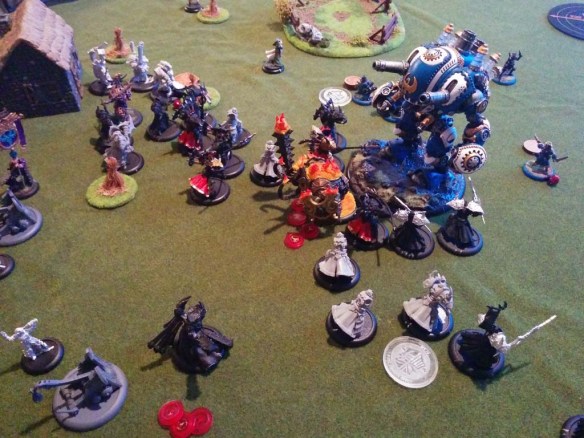 In Nick’s defence, I didn’t tell him to take pictures… mostly because I wasn’t aware I needed to… but hey, I’m fielding a real man’s Siege list (finally), and it’s time to start putting it through its paces!

So as much as I’ve enjoyed my SUS-Siege, I would like to do well at the Southern Ontario Open rapidly approaching (next Friday! Gah!) and that requires a slightly more… “mature” approach the my lists. Sure, the Trencher Cannon Crew and Grenadier are cute, and if I had another month to practice them I might make them work for me… but there’s a reason nobody takes them. Instead, I turned to Jay Larson’s 2014 Iron Gauntlet list and tweaked it slightly towards a more me-centric playstyle. And when I drew Kassem and his Skorne, I knew it was time to put it to the test.

The only change from Jay’s list is swapping out the Black 13th for Lady Aiyana and Master Holt (who I suspect are in his Haley2 list). I’m not 100% sure it’s a good change, but Siege doesn’t really need Lynch’s Flare-shot and a few more boosted POW10s aren’t much help, but taking a unit of Cetrati from ARM16 with Defender’s Ward and Shield Wall under Xerxis’s Feat on Siege’s Feat turn down to ARM12 with Eiryss and Aiyana… that’s a pretty big difference. And now the loss of either isn’t as huge of a blow… at least in theory.

As for Kassem, he’s tweaked his Xerxis list slightly and come out the other side with this:

That’s a lot of AoEs… which normally Siege laughs at (ah, Foxhole, how I love thee), but the ability to light stuff on Fire… that’s a problem. Especially for my fragile, fragile units (A&H, Eiryss, and the ATGM). On the flip side, the Catapults aren’t going to be an issue, I suspect…

Our scenario for this game was “Close Quarters” (2 flags, one friendly and one enemy. 1CP to control the enemy flag or dominate the friendly flag, 2CPs to dominate the enemy flag. Killbox is go!).
We rolled for initiative, which I won and elected to go first. First mistake. Kassem picked the side of the table with the hill, and we’re off.

The Stormwall went slightly to the right of middle, with the Boomhowlers going to the right flank with Aiyana and Holt. The ATGM went in the middle with the Stormcaller behind them, and Siege went next to the Stormwall and Greygore.
The Rangers got Advanced Deployed to the left, and Eiryss to the right.

Kassem but a unit of Incidiarii and Arcuarii on either flank, with the Cetrati and the last unit of Incidiarii smack in the middle with Tiberion and Xerxis behind them. The Catapults were Advanced Deployed slightly to either side of center. 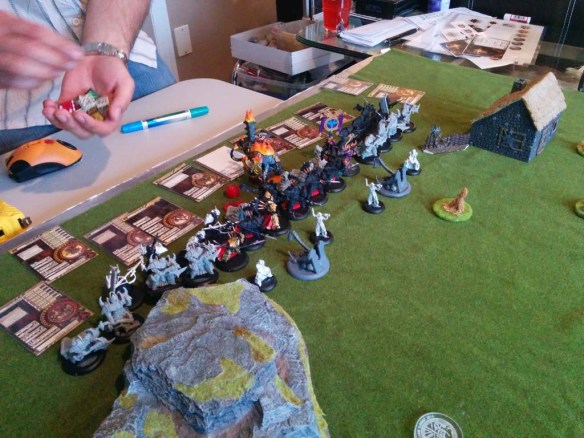 We are ready to get this show on the road! 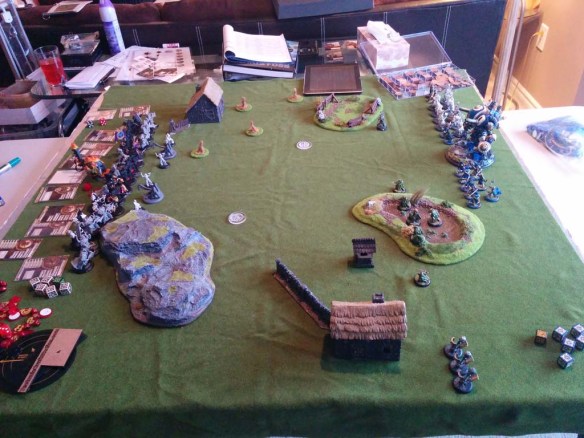 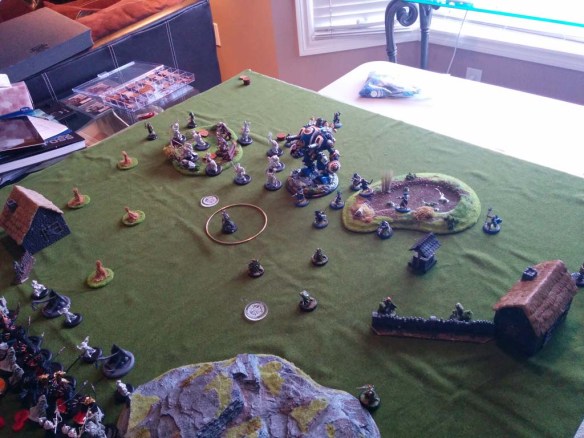 – Catapults go first. They open fire on ATGM, but only kill 1 Ranger
– Incindiarii go next, moving forward and lobbing out burning pitch. They manage to ignite 1 Boomhowler and Eiryss
– The rest of Kassem’s stuff clumps forward in a clump of forward clumpiness. Shieldwall and Defender’s Ward go on the Cetrati

– Both fires go out (woo!)
– Siege allocates 1 to the Stormwall, drops Foxhole (oops), upkeep Arcane Shield
– Eiryss aims and pops a shot into the Cetrati: hits, does a damage, and removes Defender’s Ward
– Rangers move up and open fire, killing 1 Incindiarii and wounding another
– ATGM move up and open fire, killing 2 more Incindiarii on the left flank
– Holt aims and pumps 2 shots into an Arcuarii, killing it. Aiyana hangs back and gives herself Stealth
– Boomhowlers run forward to try and jam, but none are close enough to engage anything. They do spread out a lot. Greygore himself goes near Eiryss
– Siege activates and recasts Foxhole exactly where it was (sigh), and then Charges into it.
– Stormwall walks up and is out of range of anything, wasting 1 Focus. Drops a Pod and Covering Fire to make it difficult to move past my front line.
– Journeywoman cautiously moves up towards Siege, ready to swap Arcane Shield if needed. 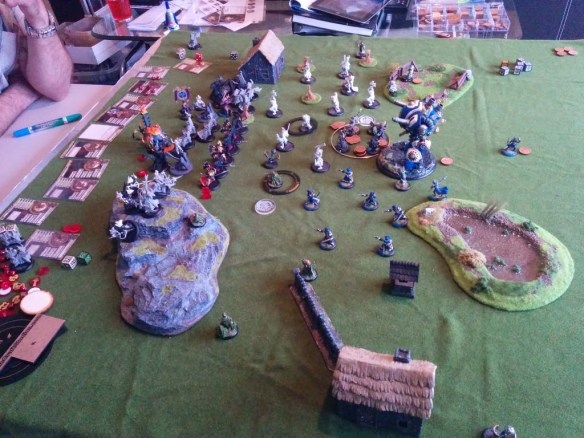 – Catapults spit out their shots at ATGM, killing a couple and a Ranger
– Incindiarii all go next. They light 3 Boomhowlers (including Greygore), Siege, Reinholdt, and Eiryss on fire. They also kill a couple Rangers and ATGM, my Stormcaller, and light one of his own Arcuarii on fire through a bad scatter
– Xerxis moves up and to the left, pops his Feat, and recasts “Defender’s Ward” on the Cetrati
– Arcuarii on the left move up and kill another Ranger, leaving me with 2
– Arcuarii on the right smack a couple Boomhowlers, killing 2 who Tough
– Cetrati Shield Wall forward up the middle
– Tibbers moves up B2B with Xerxis near the middle. 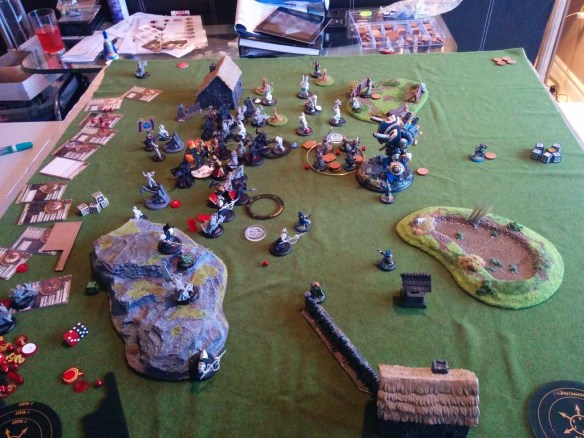 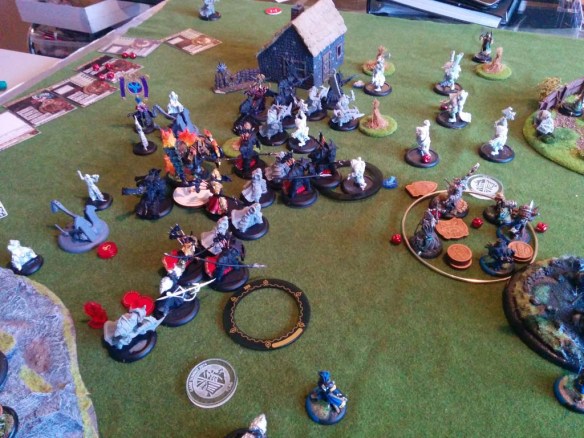 – The fires kill Eiryss and Reinholdt, put a few damage on Siege and Greygore
– Siege allocates 3 to the Stormwall, pulls from the Squire, drops Foxhole again
– I decide to go for the Assassination.
– 1 ATGM is engaged by an Arcuarii. I have all 3 aim. First shot misses (first Kassem’s model, then my ATGM), second shot misses the Arcuarii but kills my ATGM. Oh good.
– 2 remaining Rangers run towards Xerxis: first dies to a free strike and the unit breaks before the others can move. Oh good.
– Fine, whatever. Siege moves up to get Xerxis in CTRL. Pops Feat. Casts “Foxhole” on the intervening models to removing LoS-blocking. Pumps a shot into Xerxis, boosting to hit and damage, and inflicts 13 points, which are transfered to Tiberion.
– Stormwall walks up and opens fire on Xerxis. First shot I roll a hard 8 to hit and Kassem Shield Guards the shot to Tiberion. I boost damage and inflict a modest 19 points of damage. Second shot, boost to hit, hit, boost damage, and I inflict 2 points on Xerxis. I roll a total of 4 Metalstorm shots, all of which go into Xerxis: one hits but pings off the warlock’s ARM.
– Aiyana and Holt activate. Holt aims, Aiyana kisses an Incindiarii, 2 of which Holt promptly kills.
– Boomhowlers activate, a few standing up from their Tough checks. I Super-Tough again and swing at Cataphracts (Arcuarii, Incindiarii, and 1 Cetrati): every attack, including a CMA from Boomhowler, misses.
– Journeywoman walks up and puts “Arcane Shield” on Siege from extreme range. 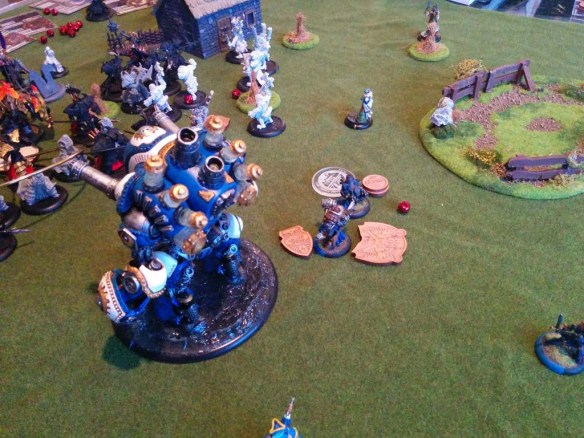 – Kassem pulls in Fury, the fire goes out on his Arcuarii. He pulls in Fury and upkeeps Defender’s Ward
– 2 Arcuarii charge the Stormwall, cranking damage and inflicting a total of 20 points. They miss my last Ranger
– Incindiarii move up and kill 2 more ATGM, leaving me with just The Dude. He breaks.
– The Cetrati charge, 3 going on the Stormwall and the rest on Boomhowlers. The Stormwall has its left side Crippled and light damage to the right (Kassem misses one attack on snake eyes). Several Boomhowlers and Greygore himself go to the big Kriel in the sky.
– Tiberion charges Stormwall. Burns through his Fury, misses 2 attacks (snake eyes! Woo!), leaves Stormwall with functional Right Arm, Superstructure, and Cortex. Oh yes…
– Xerxis shuffles away from Stormwall’s right side. 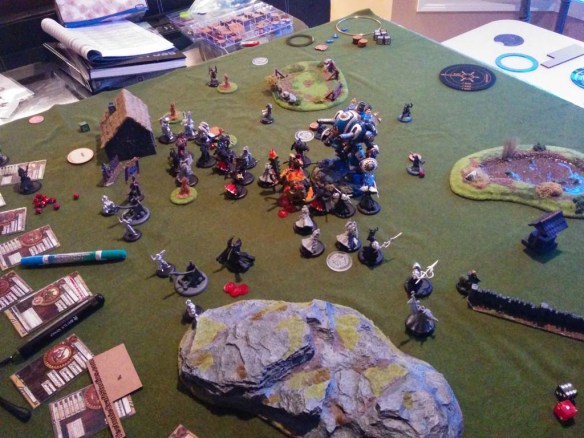 – Well, the Stormwall is still standing. That’s something. 3 Focus to it, pull from the Squire, upkeep Arcane Shield.
– ATGM rallies
– Aiyana attempts to kiss Tiberion: misses. Holt pumps shots into Incindiarii, killing 1
– Ranger walks up and knifes Arcuarii for a few points of damage (at POW7? I’ll take it!)
– Stormwall lays into Tiberion, kills him on 1st bought attack. Kills 1 Cetrati, needing a hard 8 to hit, but misses last attack.
– Siege walks over to flag, pumps a boosted shot into last Cetrati contesting it: hits and kills him.
– Boomhowlers shuffle around a little and swing on Incindiarii and Arcuarii, missing most of their attacks but killing 1 Arcuarii
– Squire moves between Siege and slobbering hordes.

Score is now 1-0 for Cygnar 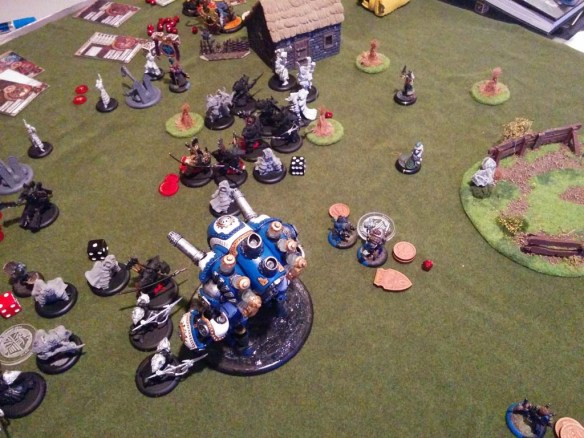 – Kassem drops Defender’s Ward
– Left side Incindiarii and Arcuarii kill last ATGM and Ranger.
– Xerxis puts Defender’s Ward on himself, runs to flag
– Cetrati polish off Stormwall
– Arcuarii and Incindiarii on right move up to flag, but Kassem forgets to put 1 B2B with it. They kill a few more Boomhowlers, leaving me with 1. They also kills the Squire.
– Catapults kill Aiyana (I forget “Quick Draw”). Holt shrugs. He’s so over her.
– Kassem scores 1CP from dominating his own flag

– Siege camps full stack, upkeep Arcane Shield
– Journeywoman runs the hell away, footing it towards my back table edge.
– Siege walks over to Arcuarii, boosts to hit (hoping for a Smite): no Crit, but does hit and splatter the guy.
– Holt walks towards the middle of the board, pumping 2 shots into Catapults: kills once, misses second shot.
– Last Boomhowler kills Tyrant Commander
– Kassem scores another CP, bringing the score to 2-1 for Skorne! 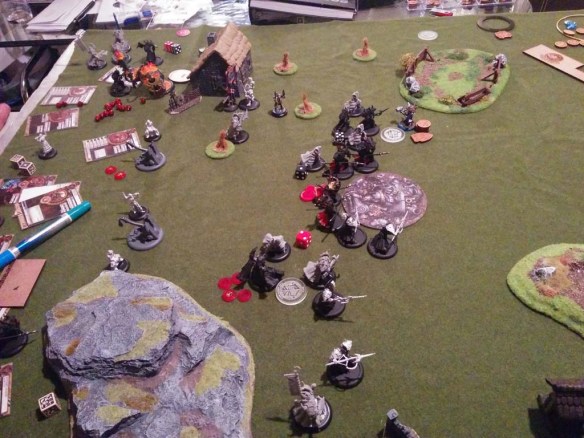 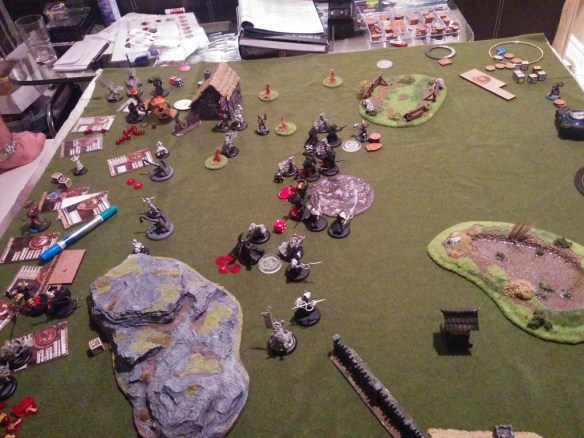 – Xerxis upkeeps Defender’s Ward
– Cetrati charge Siege. One manages to hit for 11 damage (ouch), the rest miss or just run into position. One Incindiarii engages Holt and the last Boomhowler
– He carefully positions a Arcuarii B2B with my flag
– Ends his turn with 4 seconds on the clock and the score goes to 4-1 for Skorne! 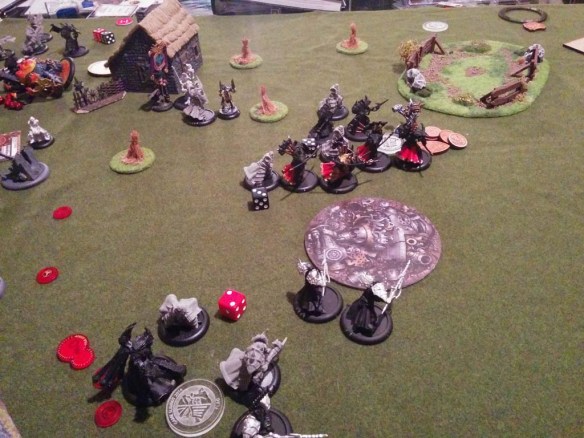 – All I have to do is contest both flags and I’ve got this… Siege camps full stack, Arcane Shield is upkept.
– Siege walks away from 2 Cetrati and an Arcuarii. Kassem gleefully picks up his dice.
“You know Free Strikes are on your clock, right?”
“Oh… no free strikes…”
Folks, he looked like I just kicked his puppy.
– Siege “Ground Pounds” the Incindiarii engaging Holt. Boost to hit, boost damage, splatter him.
– Holt runs towards Kassem’s flag, managing to contest!
– The last Boomhowler swings at the TyCom Standard Bearer, hits and kills
– My Journeywoman Warcaster runs at my flag… but can’t get within 4″. 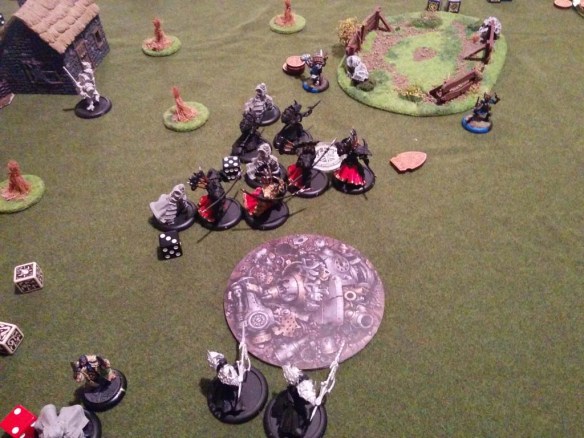 You know the worst part? I had this game. All I had to do was place the Ground Pounder to hit the TyComStanBearer AND the Incindiarii. Run Holt to contest Xerxis’s flag, run the Boomhowler to contest MY flag, Victory. But NOOOoooOOOOoooo… can’t actually win a game with Siege! That would cause some kind of paradox-wormhole or something. Bah. I am at a 33% win rate with Siege right now (6 wins, 12 losses).

But, of course, this loss was 100% my fault. Going for the assassination was a HUGE mistake… should’ve just run a Ranger close to Kassem’s front line and Ground Pounded 5-6 Skorne models into paste on Feat, followed by putting Arcane Shield on the Stormwall and pumping 1 Shot into Tiberion and the rest into mopping up his infantry. Stupid, stupid, stupid.

Oh well! This is how you learn… and hopefully everyone out there learned a valuable lesson! Thanks for listening, and always happy to answer any questions, comments, criticisms, or the like!