Time for another battle report against Skorne! And why play against the A-list warlocks when you can play against eHexeris!

I joke, I kid… Hexy is a fine warlock. Great spell list, interesting Feat… and I’ve never played against him before. This was going to be educational!

Kassem was trying out a new list pairing (eHexy and Naaresh), and I foolishly decided to drop Siege into it… not that Siege doesn’t have game (Siege, as near as I can tell, almost ALWAYS has game), but eHaley unquestionably would’ve been a better drop. Oh well!

Initiative was won by Kassem, who elected to go first. Marc took the side of the table with the bigger hill.

Scenario was Close Quarters: 2 flags 21″ up the table and 18″ in. Killbox is yes. 1 CP to dominate your own flag or control the enemy’s flag, and 2CPs to dominate the enemy flag.

Stuff was deployed in places. Marc forgot to take pictures, but basically Kassem put Mammoth near the hill on his side of the table, Incindiarii in the middle with eHexeris, the max unit of Beasthandlers near the Mammoth, and the Nihilators on the right.

Marc put the Stormwall near the hill in the middle of the table, leaving space for the Boomhowlers to go in front. Siege went to the right of the Stormwall with Aiyana and Holt, the ATGM near the middle of the table, and the Rangers as far away from the Mammoth as I could manage. Eiryss got deployed well back from the AD line (behind even the usual deployment line) to avoid the Mammoth drifting a lucky run-Snipe-Ancillary shot on her top-of-1.

Siege camps everything.
Rangers activate and walk. 4 get within range of Nihilators and fire: successfully take 2 off the table.
ATGM goes next, moves up and spread out. Snipe shots kill 2 Beast Handlers from the forward/left unit.
Eiryss runs up the left flank.
Boomhowlers get Arcane Shield, Super Tough, and run forward, spreading out. 3 go in a line to block LoS to Boomhowler.
Stormwall activates, walks forward, and drops a Lightning Pod and Covering Fire. Nothing in range of the big guns.
Siege moves up and casts “Foxhole” on himself. Squire and Reinholdt run inside.
Aiyana and Holt run and split up: Holt runs up the middle of the table, Aiyana moves near Siege.

Pull in Fury, upkeep “Ashen Veil”
Cyclops Brute runs forward.
Incindiarii go next. Move up, open fire: kill 1 Boomhowler (no Toughs), damage Greygore for 6 points, kills Holt, lights a couple others on fire. Also lights the Brute on fire. Aiyana fails her CMD check and breaks.
Mammoth moves up, opens fire. Kills 3 ATGM and another Boomhowler. Uses “Counter-Blast”
Raider moves up and gives itself Snipe. Takes a shot at Boomhowler, but misses.
Hexeris activates and moves up. Arcs “Ashes to Ashes” onto an ATGM, boosts to hit. Hits him and 4 nearest targets: wipes out the last of the ATGM with a boosted damage roll on the Officer. Puts “Black Spot” on the Boomhowlers. Pops Feat to pull back Fury.
Nihilators charge Rangers. Kassem kills 3 and the Lightning Pod.
Beasthandlers move up and whip off some Fury.

Fire goes out on 4 Boomhowlers, but not Greygore: he takes 1 point of damage.
Siege drops Foxhole, pulls from the Squire, allocates 2 to the Stormwall.
Eiryss moves behind Beasthandlers (we both forget about Counter-Blast) and shoots at a Nihilator: out of range.
Boomhowlers go next, moving forward. Kill a couple Nihilators with CMAs. None Tough.
Rangers activate and run. 1 tries to get close to Incindiarii: dies to a free-strike. Other two run forward more conservatively.
Reinholdt reloads Siege.
Siege moves up and pops Feat, catching all Incindiarii, Raider, Brute, but not Hexeris or Mammoth. Drops a Groundpounder on Incindiarii, killing 4. Second shot goes into Raider, but misses. Casts “Foxhole” on himself.
Stormwall moves up. Pumps a big gun shot into the Cyclops Brute, boosting damage, and inflicts 16 points. Second shot goes into the Raider, doing 20 points. Drops Covering Fire and Stormpod, killing 2 Nihilators with the Pod.
Stormcaller walks forward and tries to Triangulate with Stormpod: out of 20″
Aiyana rallies.

Fire does not go out on Brute: also
Kassem upkeeps Ashen Veil and Black Spot, pulls in Fury.
Raider goes first, puts “Snipe” on Mammoth. Takes a shot at Siege: misses by a mile.
Extoller moves up and takes a shot at Siege, boosting to hit… and hitting! Boosts damage and inflicts a solid 3 points.
Hexeris moves towards the middle of the table. Casts Hellfire at an engaged Boomhowler: it misses and scatters away harmlessly. Camps 2.
Incindiarii activates, shoots a Boomhowler and kills it. Second shot goes into Siege: misses, but scatters onto him and Squire, lighting both on Fire.
Nihilators kill a few more Boomhowlers (none Tough). Hexeris uses their deaths to heal his warbeasts.
Mammoth activates and pumps a couple shots into Boomhowlers, killing them (none Tough). Shoots the Stormwall for a total of 8 damage.
Brute moves between Stormwall and Mammoth protectively.
Left unit of Beasthandlers try to kill Eiryss (2 miss) and Stormsmith (misses).

None of the fires go out: Squire dies, Siege takes 2 more points of damage, Greygore is unharmed.
Siege gives 3 Focus to Stormwall, upkeeps Foxhole.
Reinholdt Reloads Siege.
Boomhowlers (2 remaining) kill another Nihilator, who does not Tough.
Rangers run. 1 gets within 5″ of Hexeris.
Siege aims. Fires at Hexeris: hits! Boost damage and inflict 10 points, which Kassem takes. Second shot boost to hit… misses.
Journeywoman puts Arcane Shield on the Stormwall.
Stormwall activates. Moves up, opens fire on Hexeris, needing 7s to hit. Both big gun shots raw-dog 7s, and boost the damage, inflicting heavy damage which Kassem transfers to the Mammoth. Metalstorm guns get a total of 4 shots: first 2 hit, leaving Hexeris on 2 boxes. Last two shots… both miss. Try to drop a Stormpod behind him but can’t get range: instead, drop it to hit a Nihilator (fails Tough) and the Extoller, which it fails to wound.
Stormcaller moves up to be B2B with the Paingiver engaging him, tries to Triangulate again, but is still out of 20″ from the Pod.
Aiyana moves into the Foxhole with Siege and Rienholdt.

Fury comes in.
Incindiarii kills a Ranger, healing a point of damage (and an aspect) on the Mammoth.
Paingivers Enrage the Mammoth and Medicate him back to full functionality.
Mammoth charges Stormwall. Burns through initial 3 attacks plus 5 bought attacks: leaves the Stormwall on 8 boxes (some subpar damage, but didn’t miss any attacks!). Gets an Ancillary: does 4 points of damage.
Brute charges. Hits for 1 point (leaving in on 3 boxes: Right Arm, Cortex, Leg), fails to wound it again.
Raider shoots Siege: misses, hits a Nihilator and kills it.
Nihilators kill last Boomhowlers. Neither Toughs.
Hexeris casts “Hellfire” at Stormwall. Hits! Boosts damage… inflicts none.
Extoller shoots Stormwall: No damage.
Beasthandlers on left miss Eiryss and Stormcaller.

Drop Arcane Shield and upkeep Foxhole, 3 Focus to Stormwall.
Aiyana moves up and Kisses Mammoth successfully.
Stormwall lays into Mammoth, killing it with 1 Focus to spare. Punches Incindiarii to death, electroleaps do a few points of damage to Brute.
Journeywoman casts “Arcane Shield” on Siege.
Reinholdt reloads Siege.
Siege drops a Groundpounder on Extoller, Raider, and Nihilator: misses all three. Second shot goes into Raider and hits: leaves the Raider with Crippled Mind and Spirit.
Eiryss kills a Beasthandler.

Brute Frenzies and scraps the Stormwall.
Hexeris moves away from Siege on full camp.
Nihilators charge Aiyana, klling her. One hits Siege for 2 points of damage (ARM20)
Extoller tries to shoot Siege, but he’s DEF24 and easily missed.
Beasthandlers fail to hit Eiryss again, but do kill the Stormcaller.
Other Beasthandlers Enrage Raider.
Raider charges Siege, but leaves him on 5 boxes. 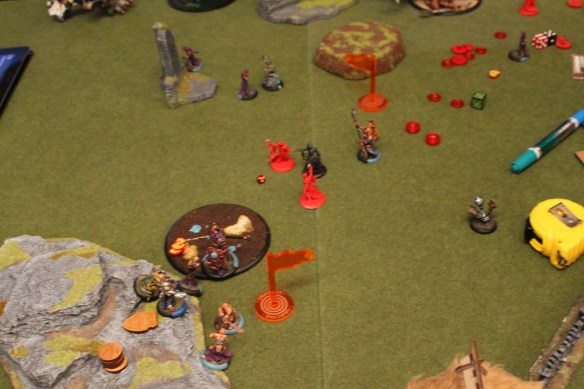 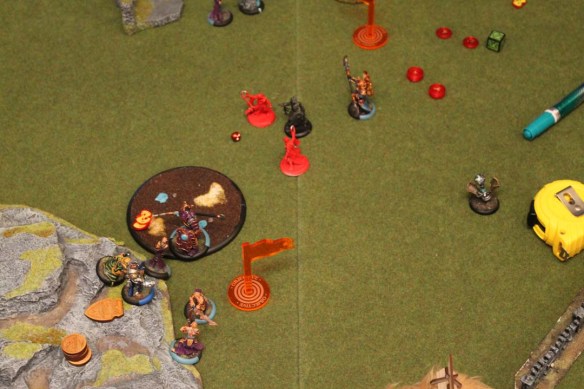 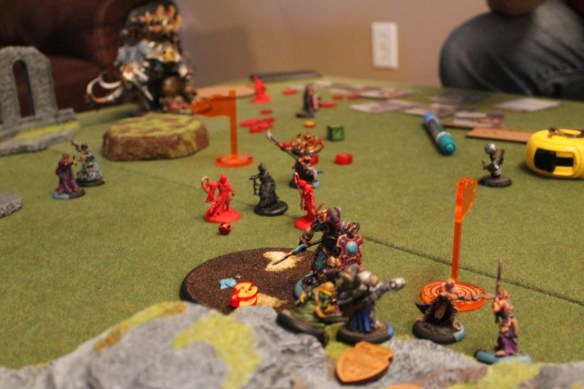 Well, pulled off the win, but I really wasn’t expecting the Mammoth to scrap my Stormwall in a single activation, and that was silly of me. Although, I will say it’s rare (if not unheard of) for my Stormwall to scrap a Colossal on its own… I have to remember that Skorne warbeasts hit disproportionately hard!

Lessons learned, and I managed to pull off the win anyway… and I really should’ve gotten that assassination run on Hexeris the turn before he charged my Stormwall. Oh well!

Thanks for listening! Any feedback is always welcome!