It’s that time of year again, folks… the Ontario Team Championships have come and gone. Nick and I managed to rope the two hosts of Arcane Assist into helping out with one of our teams this year, and it was an incredibly fun time! 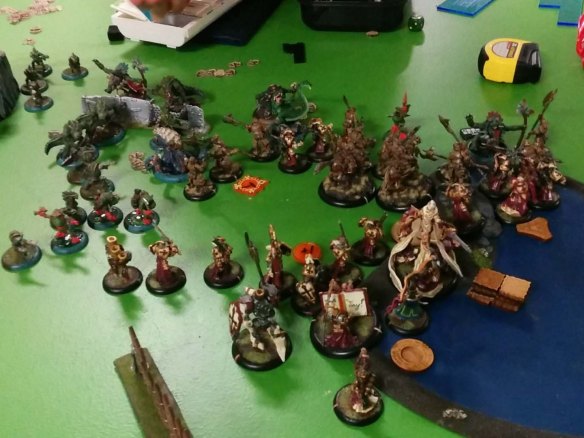 A big thank you to Matt and Tim for helping out, both with the team and with this week’s podcast!

Overall, Team Combo Smite featuring Arcane Assist came in 10th, near the top of the 2-2 teams, and I’m extremely proud of how everyone did. Sure, we may not have gone home with the gold, but we played good games, had a lot of fun, and learned a valuable lesson about sharing (well, not really, but it sounds good!).

Here are a few shots I took of my games from the event: 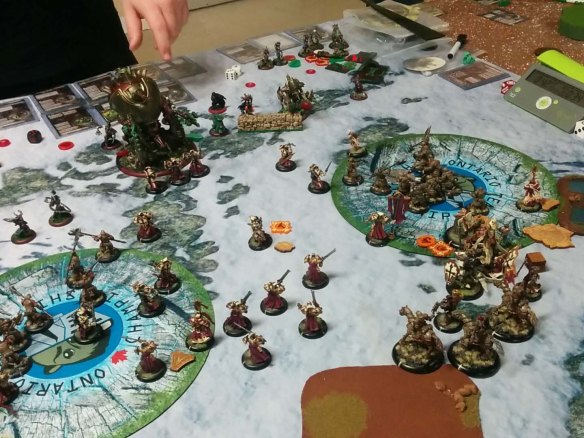 My Harby list *hates* Krakens. Can’t crack the armour on the things… so I’m grateful I managed to grind out a scenario win before that monster got into a zone!

Round 2 versus Khador (Butcher3)

Playing against Bubba is stressful at the best of times… he’s an incredible player, knows his list flawlessly well. It doesn’t help when Ruin is charged by 2 Steelhead Cav (with Flank), 3 Errants, the Errant Seneschal, 4 Knight Exemplar, a Devout, and then a +5 Knight Exemplar over the course of 3 turns and doesn’t die (and, correspondingly, kills everything within 2″ of him each and every time). Turns out that Ruin does not have a pre-programmed kill-limit…

Round 3 versus Trolls (Doomy1)

Hey kids, wanna know what the most single-sided matchup I have ever played was? This one. Runes of War into this Harby list is RIDICULOUSLY strong for Harby. There are, like, 4 models on my entire side of the table that can be targeted by spells, and only until I get the Covenant within 11″ of all his stuff. Yeah, it was bad for poor Raymond… he played a solid game, but there was basically nothing he could do.

Round 4 versus Minions (Rask)

I don’t know why Minions players keep dropping Rask into my Harby. This is probably the 6th time it’s happened? And it always goes the same way. Derek put up a good fight, and was 0.5″ away from winning, but the end was almost a foregone conclusion.

Thanks for listening, folks! Let us know if you have any questions… we’re still planning on doing a brief episode with Combo Smite Team 2 in the future, but I don’t know which week that will air!