Kassem’s been tweaking his Skorne quite a lot lately, I assume looking for the “perfect list” to rule our meta, and ostensibly to do well at the OTC.  Currently one of Kassem’s 50 pt lists has been the following:

Astute readers will note that this is the same list Kassem played in last week’s Battle Report, but he thought he needed more practice and dropped it again – this time into Trollbloods.  As well, I’m sure that Kassem was out for revenge since he was on the receiving end of an eMadrak missile not too long ago.

Darrell has recently switched to his Trolls from his Protectorate.  Durst was as still is a favorite of his but looking forward to the OTC and backward over his win/loss record he stands a much better chance of doing well with the Kriels.  Lately, Darrell’s been playing Runes of War paired with an eMadrak infantry list and has been doing fairly well.  Darrell’s initial intent was to drop Runes of War into this matchup however, as he’s played Runes a lot on the video and on the podcast, as well at Marc’s urging (and because we’ve never played it on the podcast) Darrell dropped his version of the Miserable Meat Mountain:

The scenario rolled was Destruction. 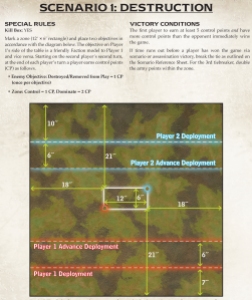 Kassem won the roll and elected to go first.  He deployed in the manner below 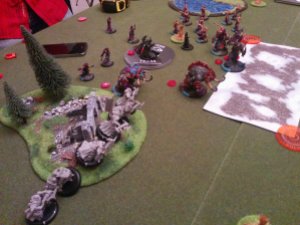 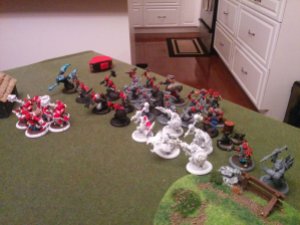 With all of that messy deployment out of the way, the Skorne forces took the offensive.

-Xerxis cast Mobility, put Rush and Ignite on Molik Karn then advanced
-Gladiator put Rush on the Bronzeback then slammed forward toward a Runeshaper unit
-Bronzeback ran
-Incindiarii ran
-Molik Karn ran toward the central part of the zone
-Cyclops Brute ran up behind Molik Karn
-Beast Handlers advanced and used Condition to remove 2 Fury off of the Sentry
-Nihilators advanced
-Willbreaker advanced

-White Warders ran straight ahead in an attempt to bait Molik Karn
-Grissel cast Inhospitable Ground and put 2 Fury into the Krielstone
-Impaler advanced and riled for 3
-Black Warders ran
-Champions ran
-Pyre Troll advanced and shot at the Northkin Fire Eater cluster, boosted to hit and set all of them on fire and doing 4 damage to the Pyg Buddy targeted.  He then riled for 1
-Stone cast Protective Aura and Stone Strength while advancing
-Northkin Fire Eaters elected to stay put to avoid becoming dead via Molik Karn or Nihilators
-Dhunian Knot advanced at a maximum spread in preparation to heal the Warders, Champions and Northkin as required

-Beast Handlers advanced and used Enrage on all of the Skorne beasts
-Gladiator put Rush on the Bronzeback before pushing him forward an inch
-Xerxis FEATed, cast Mobility and advanced a small amount
-Bronzeback charged, killed 2 warders in the white unit and utilized Beat Back to clear a path
-Cyclops Brute charged and killed 2 Warders in the black unit
-Molik Karn charged a Warder from the White unit, killed him and Side Stepped into Grissel.  3 attacks and a failed Tough check later the Skorne forces were victorious.

Yet another quick game, great job Kassem.  Darrell was a weak in the defensive advance and Kassem was able to capitalize on it to get Molik into Grissel.  Nine times out of ten, Molik into a caster is a dead caster.  Kassem is going to need to get a bit of practice with his list for situations when Molik doesn’t spike the enemy caster’s head and Darrell definitely needs some more practice with unpacking the meat mountain style of list.  I think that if Darrell was able to layer the Warders and Champions more effectively, he could have made a game out of it.  As well, more aggressive play with the Fire Eaters could have resulted in a different outcome for the game.

As a final thought for any Trollblood players wondering what they should drop in a similar situation, a second game was played using the Runes of War list and despite Kassem employing some strange Jedi mind tricks things went quite a lot better for the Kriels.

One thought on “Podcast 99: Never Let a Cygnar Player Choose Your List, eXerxis vs eGrissel”