With this week’s game played on Monday between my Cygnar and Tim’s Farrow I had the opportunity to play a solid practice game on Wednesday. This is that game.

END_OF_DOCUMENT_TOKEN_TO_BE_REPLACED

My Kraye list was originally designed for one purpose, and one purpose only: to deliver a fully loaded Minuteman B2B with a Shifting Stone or two and take them off the table so that Bradigus couldn’t assassinate Kraye. That was it. In the process, it had to be able to play against everything else in Circle, just in case my opponent decided to get “clever” and drop, say, eKrueger into it. 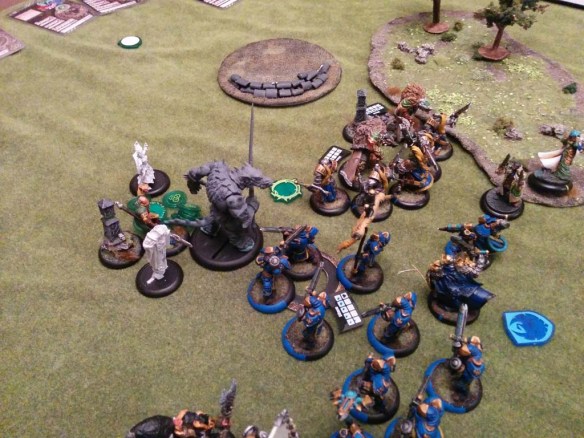 This is a story about what happens when exactly that… happens.
END_OF_DOCUMENT_TOKEN_TO_BE_REPLACED

This week for the podcast, Todd decided to get some practice in with the original Circle Power Warlock himself… eKrueger! And because I now no longer need to worry about Bradigus, but I’m still locked into fielding my anti-Bradigus Kraye list… I figured it was a good chance to see if he has any game whatsoever in this matchup!

Having played the game now, I can say, with authority; Maybe!

Nick wrote a brief outline of the battle report for today, and asked that I (Marc) “flesh it out”. I’m pretty sure he’s not exactly sure what he just asked for…

Either way, the report this week is between Nick’s Legion and Gaven’s Circle! It was an epic battle for the ages, and one in which Nick learned a little bit about caring…

(Spoilers: No, he really didn’t)
END_OF_DOCUMENT_TOKEN_TO_BE_REPLACED

I said this would go up Wednesday… it goes up Friday… which is a little like Wednesday in that they both involve the word “day”! So… better late than never?

So on Saturday, the Combo Smite crew made the field trip down to Hobby Kingdom in Burlington, Ontario. This was my second time in the venue (the last time for my foray into “Hardcore” with Menoth, which was completely enjoyable if somewhat unsuccessful!), but the first time for Nick, Aaron, Darrell, and Kassem. Great venue, tonnes of fun… and a solid 27 players that showed up! 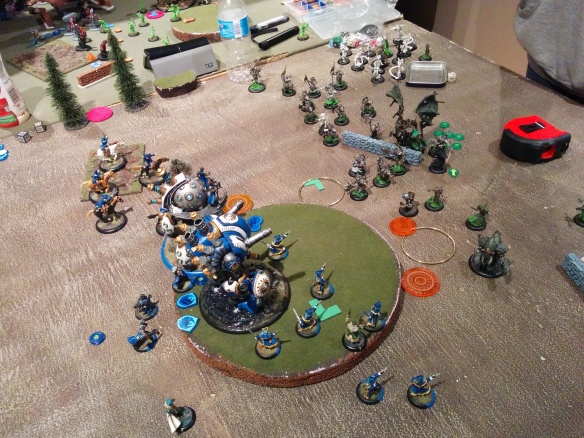 Nick is writing up his own reports from the event, but I do so love writing battle reports, and hopefully my (mis)adventures can help other Cygnar players!

END_OF_DOCUMENT_TOKEN_TO_BE_REPLACED

Last week I was practicing list for the 50pt Steamroller Tourney at the Game chamber. The battle reports for the tournament have already gone up but I thought I would post this battle report anyway.

I was matched up this week against Gaven and his Circle. END_OF_DOCUMENT_TOKEN_TO_BE_REPLACED

In the random draw we played, I ended up facing off against Gaven and his forces of the Circle Oroboros (did I add too many “o”s to that name? Whatev’…). Gaven was rocking an eKrueger and an eMorvahna list… while I was hoping to get some practice with my eFeora list (which I am still less comfortable with than I am the Harbinger…) the clutch-piece of that list is the fire-spawning-missiles of the Redeemer… which is enormously less effective against eKrueger.

Give the podcast a listen, and/or read on to see how the battle worked out!