Alright, so I finally picked tibbers back up and decided to finish his flames. I might do some touch ups on the arm later when I get the model painted. I’ll get Aaron to take better pictures soon because apparently my iphone doesn’t like fire colors 😛 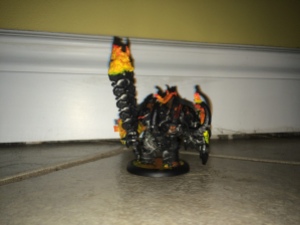 END_OF_DOCUMENT_TOKEN_TO_BE_REPLACED

Alrighty, now that the glue has completely cured overnight, I decided to add some more color! A bunch or orange and a teency weency bit of red.

END_OF_DOCUMENT_TOKEN_TO_BE_REPLACED

So between last night and today I did a couple of things. First of all, I painted the areas I wanted to do the fire effect from in a brightish yellow. My reasoning behind this is it’ll make color pop through the glue I’m going to use, making my fire more realistic and vibrant. A common misconception, or rather, a painting error I commonly see is that people make their fire dark red at the bottom and lighten it on the way up. Real fires start bright at the source and get darker. I applied three coats and let it set for the night. END_OF_DOCUMENT_TOKEN_TO_BE_REPLACED

As many of you know, I am not the biggest fan of painting for a number of reasons. Mostly because I’m not the greatest painter, don’t often have time, and rather be doing something else when I do have time. So I came up with the bright idea today- “Hey, if I make an article, I’ll have to follow through with it!”

So without further a due, I’m going to try to paint my Tiberion in preparation for the eXerxis release. I am going to attempt to do a flaming scheme on him as eXerxis has ignite. You will notice his right arm looks funny. That is because I made it bigger with green stuff to hopefully make the flames on that arm more pronounced.

Here’s some pics of him primed. Lets find out what he looks like in a few days!