Let it not be said that there is only one way to run beefy Skorne… Zaal manages to put a remarkably hearty list on the table! And Aaron was nice enough to make some custom terrain for our game… 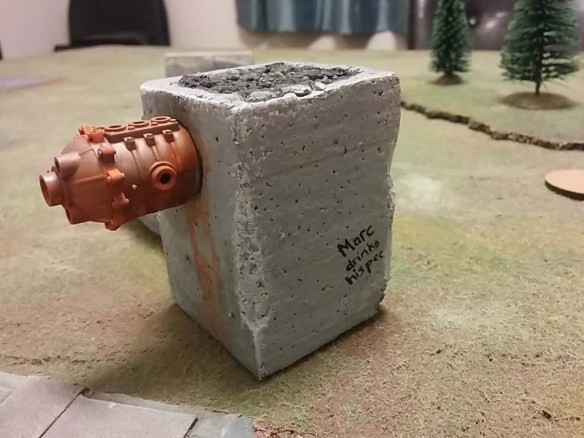 … huh. Remind me not to let Aaron make any more terrain for the podcast…

Once again, I’m putting Kraye (who I love) on the table… and against Skorne! To be completely honest, the two lists Kassem brought (Zaal and Mordikaar, I believe) would’ve been a no-brainer for pHaley. But most people won’t pair those two together (one of the two will be either Rasheth of Xerxes), and that means having to play Kraye into it. So, once more into the breach, dear friends!

I like the list. It’s not a great list, certainly, but it hits freakishly hard, can out-threat most opponents, and it’s a rare day that I can’t get at least ONE (if not both) of my Stormclads onto my enemies first. Often I can take a key heavy or colossal off the table before they can do anything with it! And the Minutemen are fantastic… rushing forward and wiping out infantry, punching warcasters (when I’m particularly lucky, 2-hand throwing the warcasters back towards my own army to be charged by a waiting Stormclad).

A pretty typical Zaal list, from what I’ve been led to believe (although usually I see a 3rd unit of Immortals in there… Tier, I assume?). Either way, the lack of magic weapons on my side of the table was going to be problematic in removing the Kovaas… since my ONE magic weapon is on Kraye (his sword, specifically). Joy.

We roll for initiative, which of course I lose and Kassem wisely elects to go first. Jerk.

Kassem puts both units of Immortals in hte middle with his warbeasts and Zaal himself. Hakaar goes behind the blue unit of Immortals, while the Kovaas goes far left. The Ancestral Guardians get Advanced Deployed, spread out along Kassem’s front lines. 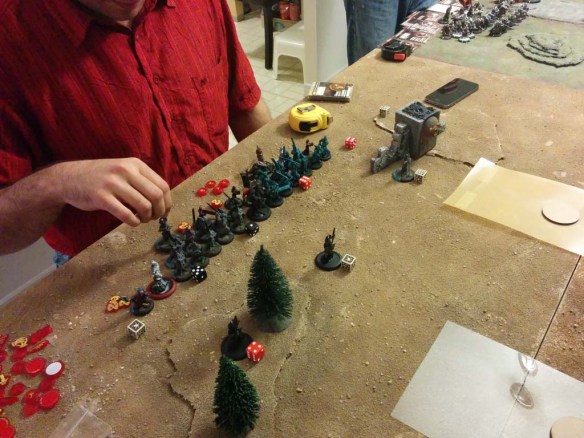 As for my noble troops… the Nyss went on the right, the Stormblades on the left, and both Stormclads went in the middle right next to Kraye. My Minutemen were Advanced Deployed in the middle, with Eiryss sent to the far right flank. 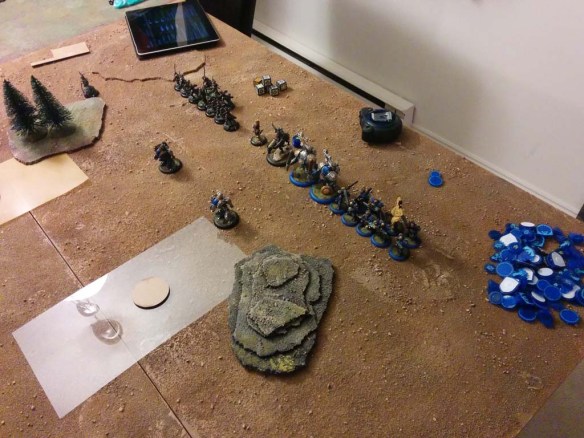 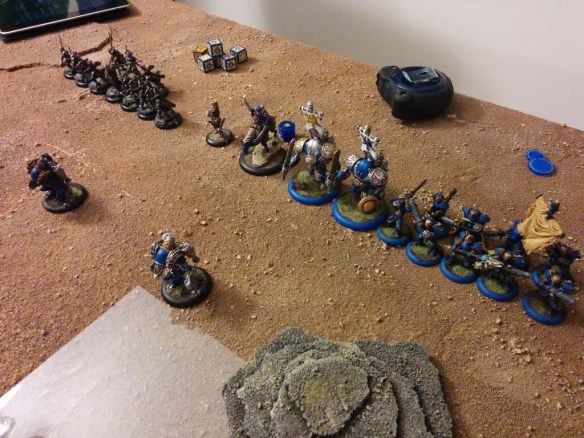 Ready to rock and/or roll! 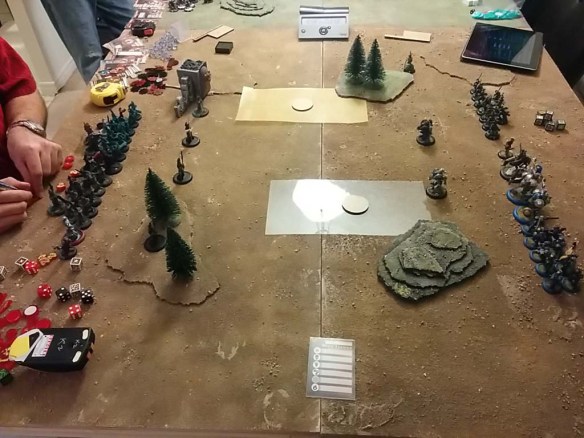 I apologize, but Skorne is still somewhat Calvinball for me… I’m learning, but slowly!
The Immortals run forward and sorta clump together (making my Minutemen salivate slightly).
Zaal moves up and casts his “Give Everything A Soul” spell/ability. He puts “Last Stand” on a unit of Immortals, and I think he put “Awakened Spirit” on the Cyclops. “Invoilable Resolve” goes on the other unit of Immortals.
The Ancestral Guardians and Kovaas all run forward.
Hakaar moves up more cautiously (behind his unit of Immortals), and the warbeasts likewise take up “safe” positions behind the Immortals. 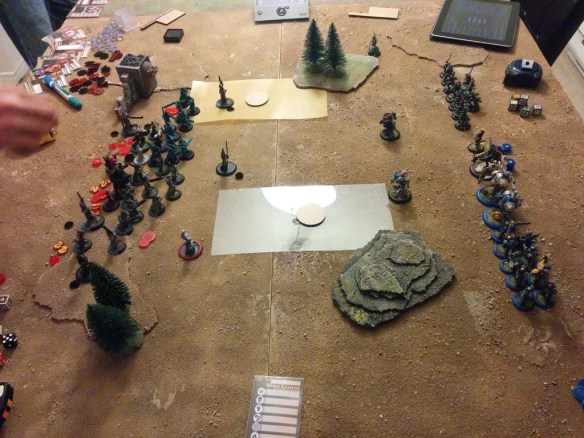 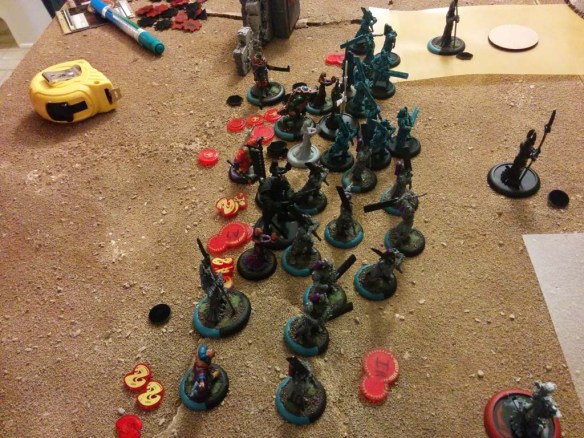 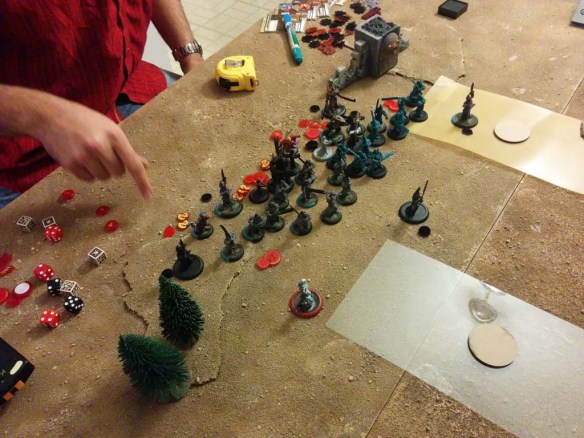 As always, I toy with the idea of a 1st turn Feat to ram my warjacks down my opponent’s throat before they’re really ready to handle them… but as usual, I elect against it. Boo. But I can still ruin a fair chunk of Kassem’s day, and so allocate 3 to the Minuteman closest to the Skorne lines.
Kraye goes first, moving up and putting “Full Tilt” on the laden Minuteman.
That Minuteman then activates, walking forward and Bounding Leaping towards Kassem’s troops (past the front line of Ancestral Guardians). He then Flak Fields, killing a bunch of Immortals and punches two others to death. Lastly, it Light-Cav moves in deeper, further tying up the Skorne forces.
My Nyss move forwards, spreading out a little and taking shots at the closest Guardian. They fail to kill it.
Eiryss moves up and pops a shot into that Guardian as well, hitting and doing a single point of damage.
The Stormclads both get their Free Focus and run forwards, with the Stormblades spreading out behind them. Rhupert gives the Nyss “Tough and Fearless”.
Lastly, my other Minuteman pulls back in front of Kraye. 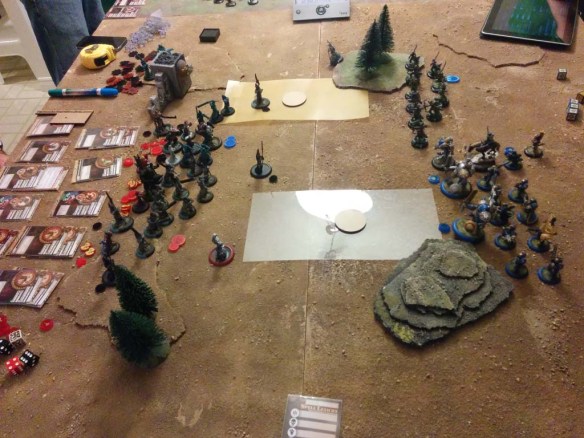 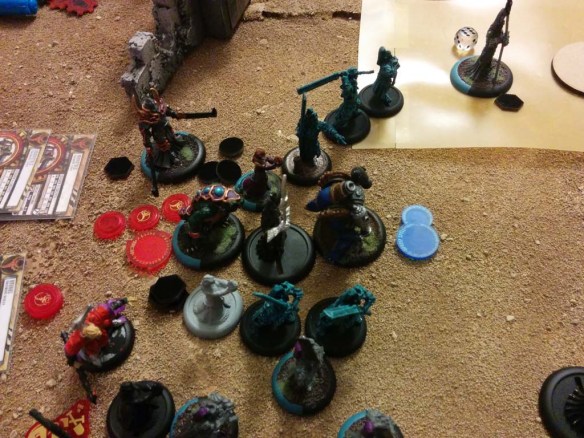 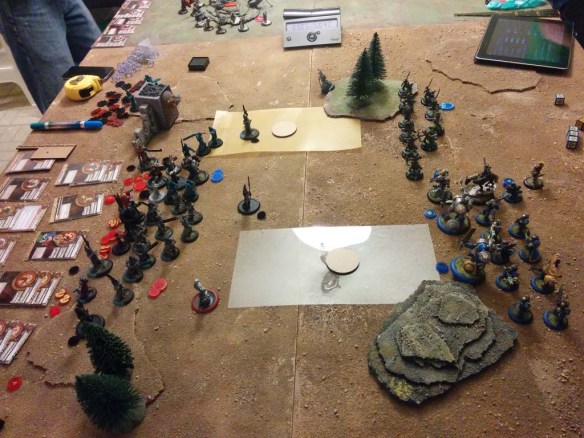 That could’ve gone better, I think… but hey, I’ve gummed up his lines a bit, and he has to deal with the Minuteman now (or risk it just Flak Fielding all his infantry to death every turn!). Fury comes in, spells are upkept.
Zaal activates and allocates out more souls.
The closest Ancestral Guardian charges and kills Eiryss (boo!).
A couple others take swings on the Minuteman, heavily damaging it.
The left unit of Immortals (with Inviolable Resolve) end up finishing off my Minuteman and moving up to screen Kassem’s army.
Everything else basically moves up to screen Zaal (I think Kassem must remember our last game where I charged a Stormclad from half a table away at Rasheth and obliterated him… he’s being a BIT more cautious this time!). 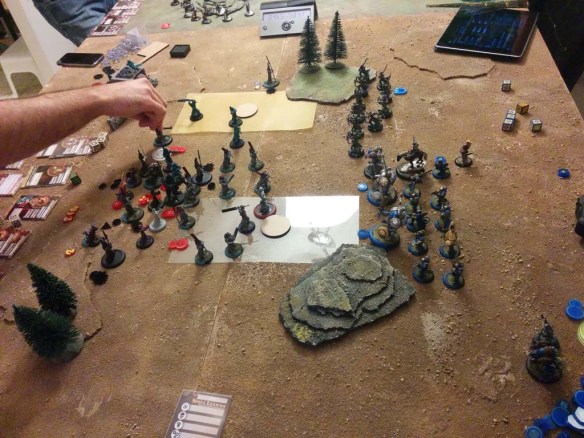 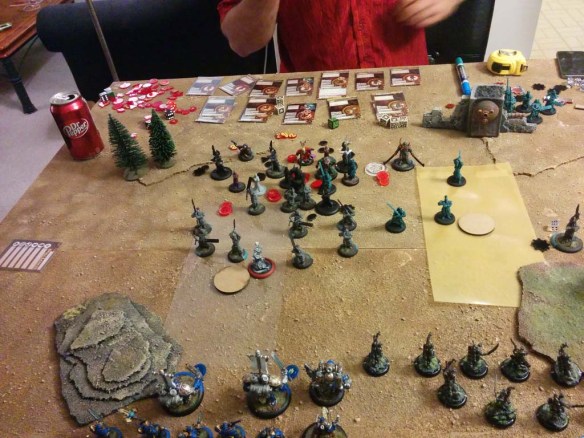 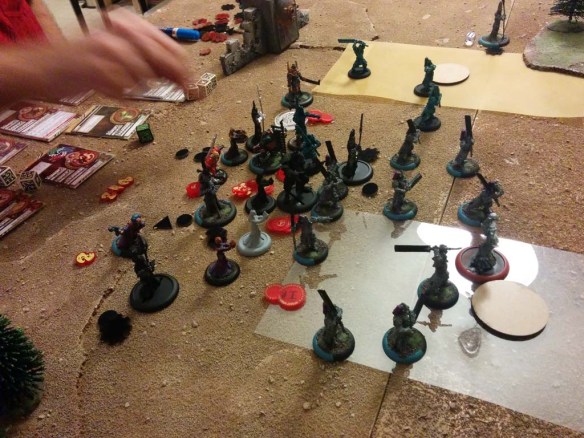 Well, leaving Eiryss there was pretty silly of me, and Kassem certainly punished me for it! Additionally, that Kovaas is already causing me problems… my current plan for dealing with it involves:
1. Killing ALL the Ancestral Guardians FIRST
2. THEN trying to kill it with Kraye.

What could possibly go wrong? 2 Focus to the closest Stormclad, and we’re off.
Rhupert goes first, giving the Nyss “Tough” again.
The Nyss go next. I charge 3 at the Guardian the killed Eiryss, 4 at the objective, and a couple others at Immortals in the middle. Everything goes according to plan… except that they fail to destroy Kassem’s Objective (bah!). Still, a few Immortals and a Guardian ain’t bad.
The Stormclad goes next, getting a free Focus, and charging into Kassem’s lines. The Ancestral Guardian within range does its Defensive Strikes for a few points. The Stormclad then effortlessly takes the Guardian and a handful of Immortals off the table. Sadly, the Cyclops Raider is *just* out of range (BOO).
My Stormblades Assault forward, but their shots ping harmlessly off the I.R.’d Immortals, killing none.
Kraye, the 2nd Stormclad, and the Minuteman all shuffle towards Kassem’s zone. 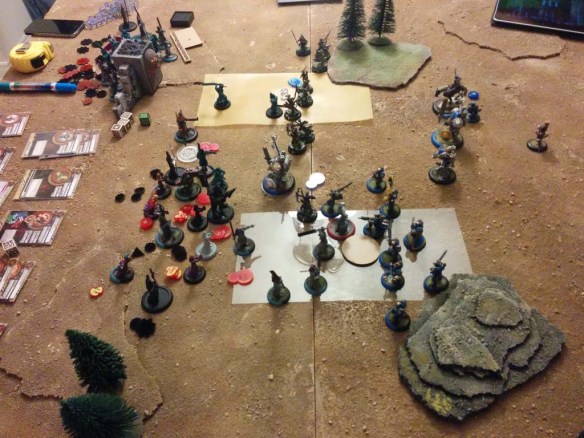 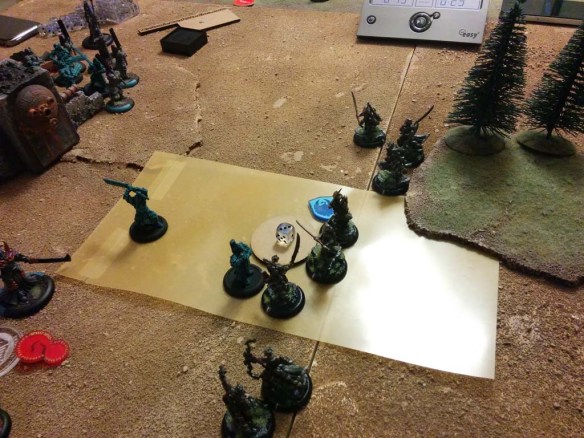 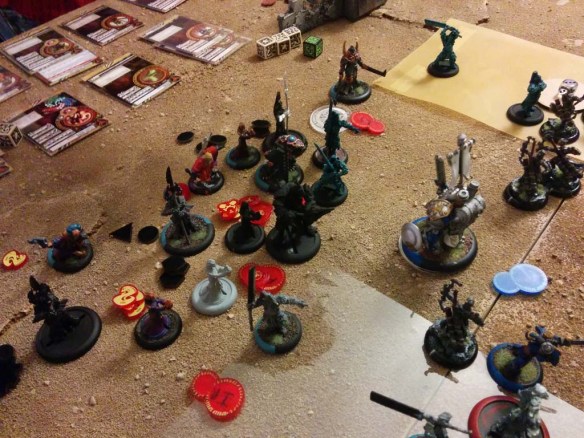 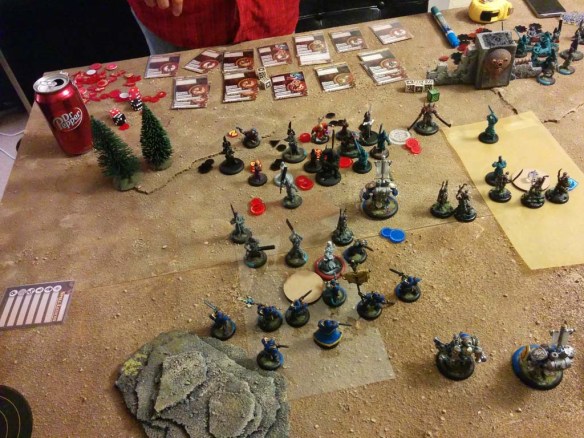 Missing Kassem’s Cyclops was a problem… but hopefully not a major one. Still, I’m about to lose that Stormclad… although I suspect it’ll take a fair bit of work to get it done. I hope.
The Last-Standed Immortals charge my Stormclad and a few Nyss. With their extra die, they manage to inflict heavy damage on my warjack and kill several Nyss. They then die.
The Krea moves up and takes a shot at Kraye, hitting! (Ruh-roh)
The Cyclops Raider moves up and boosts a shot into my suddenly very exposed warcaster… hits! Boosts damage, and inflicts 6 points.
The Extoller near the middle moves up and takes a shot at Kraye, but is out of range.
The Invoilable Resolved Immortals charge my Stormblades, killing all of them (ALL OF THEM). One runs to engage my Minuteman.
The last 2 Extollers pumps shots into the Objective, doing only light damage.
Zaal activates and puts “Last Stand” on the Kovaas. It then charges Kraye!
By some miracle, Kraye survives… I honestly forget how. Dice abandonment? Regardless, Kraye survives, and the Kovaas disappears in an angry puff of smoke. 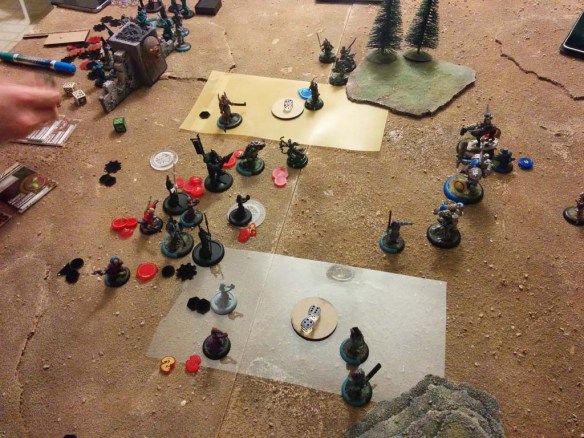 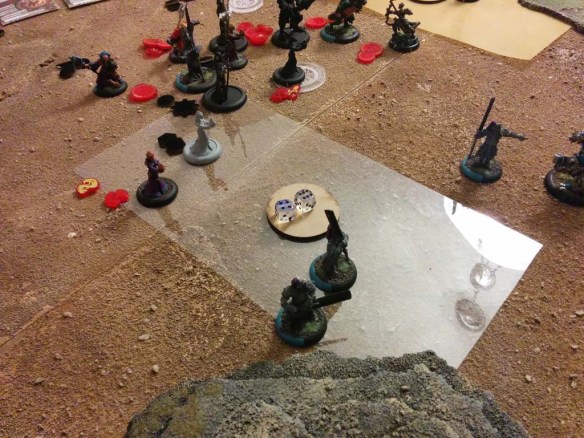 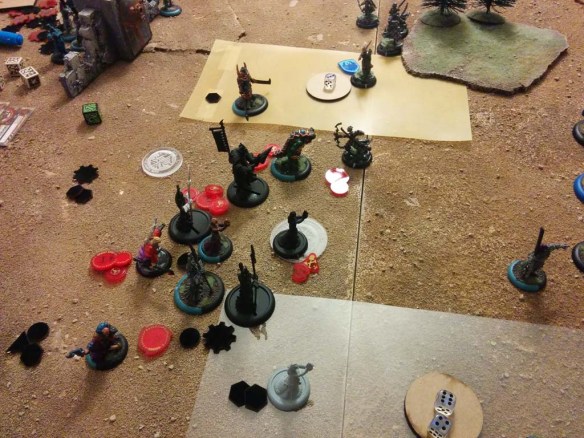 That didn’t take nearly as much work as it was supposed to… to basically kill my entire army, and then almost Kraye! 3 Focus to the Stormclad, 2 to the Minuteman, and pull from the Squire.
Kraye goes first, popping his Feat and casting “Full Tilt” on the Stormclad. He then moves to the furthest corner he can get to after taking a shot at an Immortal and killing it.
The Stormclad charges the Cyclops and 2 Ancestral Guardians. He kills the Cyclops, the Krea, and the Guardians (which generates the Kovaas again… boo…).
The Nyss finally manage to clear out the Objective. Rhupert moves over and gives them Tough.
I send the Minuteman into my zone and he puts down a couple Immortals with great prejudice.
I score 1 CP for emptying the zone… putting the score at 1-0

Hakaar and the Kovaas team up to take out my Stormclad. The last few Immortals and the Extollers pump shots into my Minuteman but don’t quite kill it. Kassem runs an Immortal into his zone to contest, and Zaal moves over and tries to destroy my Objective, but comes up short (phew!) 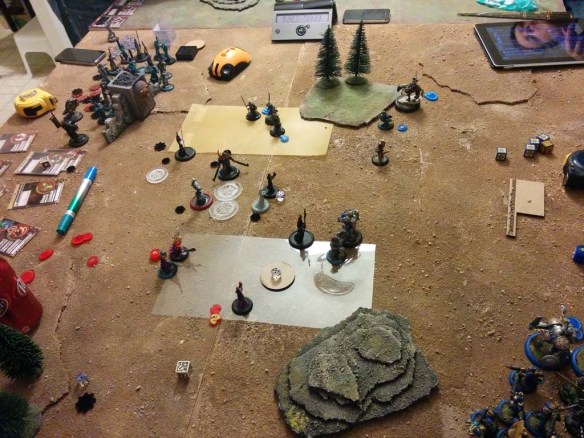 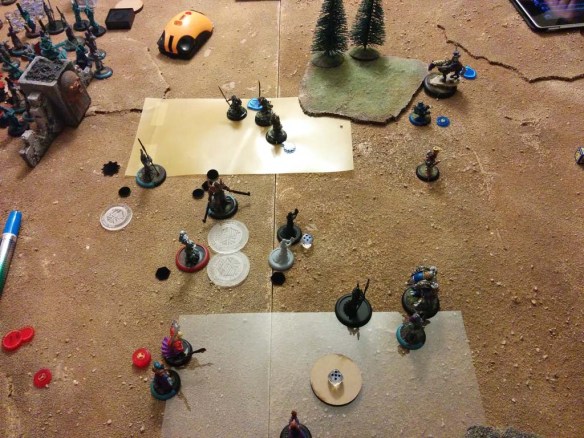 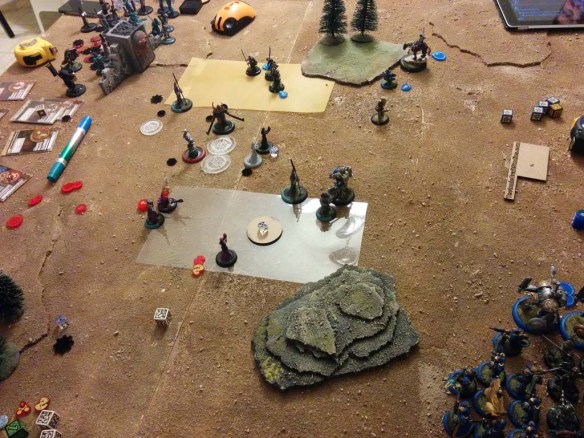 Getting a little dicey… but I think I can still pull a Scenario win out of this… and, failing that, maybe I can kill Zaal? Or at least hurt him a bunch… 2 Focus to the Minuteman, and we’re off.
My Nyss charge into Hakaar (one dying to a Defensive Strike from the Ancestral), and fail to kill him. Boo.
Rhupert moves up and gives them Tough again.
Kraye moves up into the zone and pumps some shots into the Ancestral, but comes up shy after spending all his Focus.
The Squire runs in front to choke up charge lanes.
The Minuteman moves forward and then Leaps towards Zaal, and I pump 2 shots into him. Both miss. Boo. 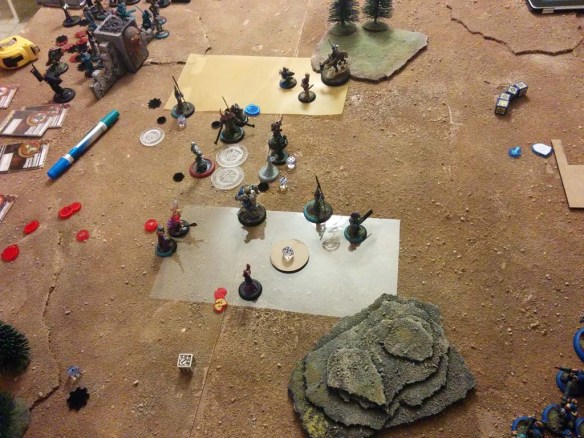 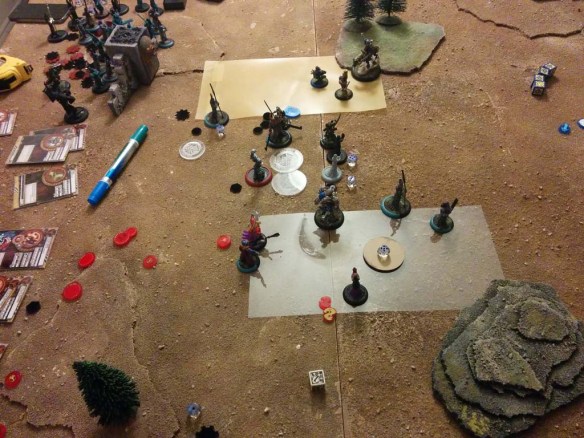 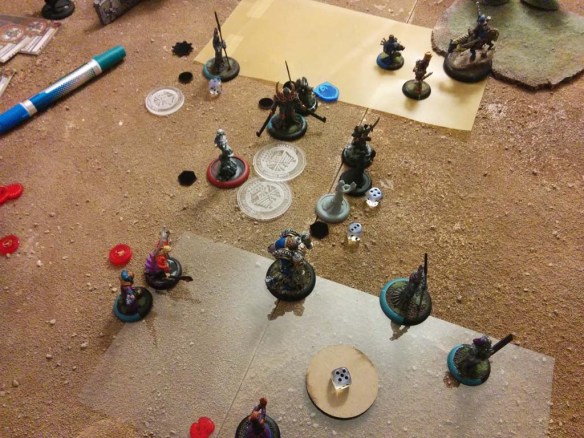 No more mister Nice Skorne….
Zaal activates and gives souls to his Ancestrals and Hakaar. He takes a few swings at the Minuteman, but fails to destroy it.
The Ancestral charges my Squire… but fails to kill it! Woo!
Hakaar turns around and kills my last few Nyss.
The two Extollers move up and pump shots into Kraye… the last shot does more than enough to kill the mighty Cygnar warcaster. 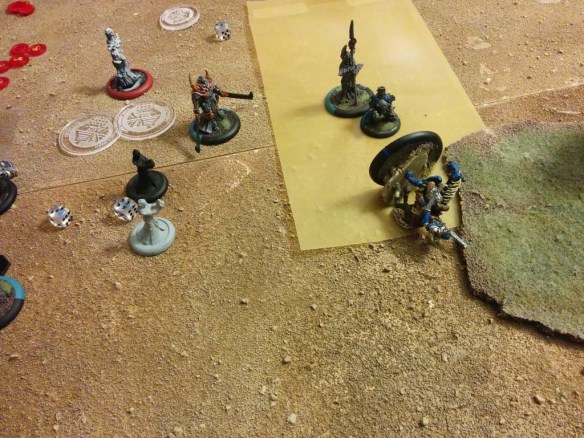 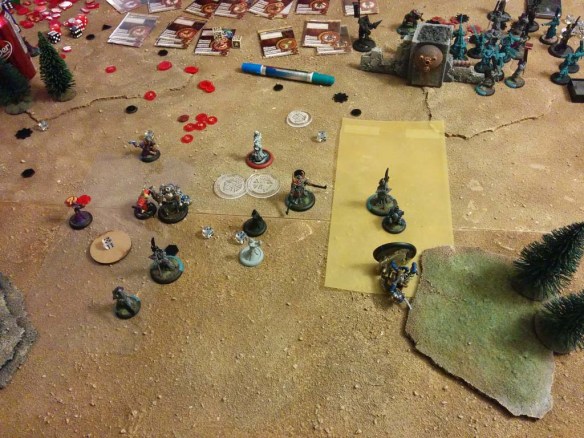 Okay, lessons were learned. Kraye is NOT a great drop into a list like this… which really shouldn’t surprise me. pHaley, on the other hand, would’ve made MINCEMEAT out of Kassem’s list… oh well. The Kovaas alone was a pain in the butt!

Other than that, fun game, and a learning experience. Thanks for reading, and hopefully you’ve all learned not to do the things I’ve done!