Finally an opportunity to get Haley3 on the podcast! Sweet! I love Haley3!

And Darrell has a chance to try out his eSevy list… who is way better than I gave him credit for back when I was playing Menoth last year.

Scenario: Two Fronts (2 zones, 16″ up and 14″ in from your left side, objective in the middle. We played the zones backwards…. 1CP to dominate friendly zone, control enemy zone, or destroy enemy objective, and 2CPs for dominating enemy zone. Killbox is Yes)

Rolled for initiative, which Darrell won and elected to go first.

Please note that I have managed to photograph Darrell’s crotch at least once every battle report for the last 7 months we’ve played. Feel free to check! 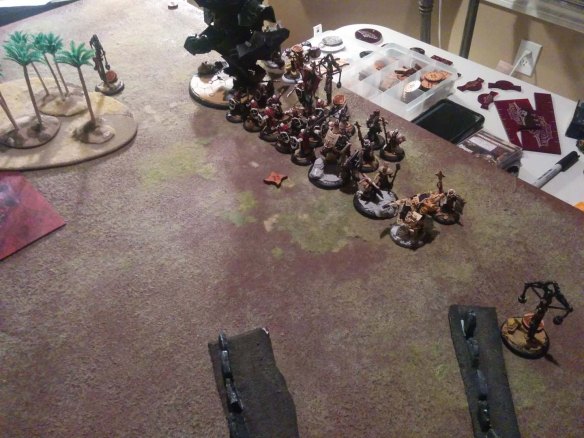 Marc counter deployed in this manner… 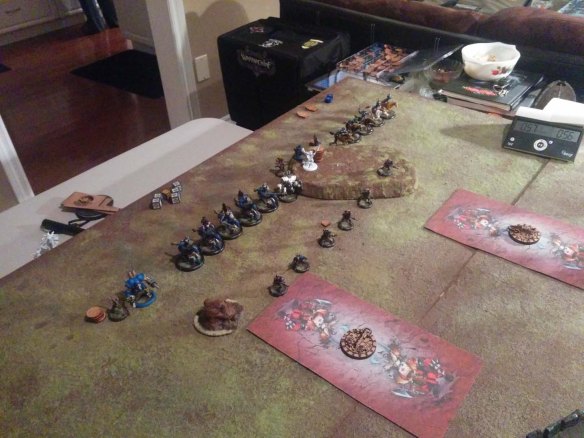 Stage is set, time to rock out with our hawks out. 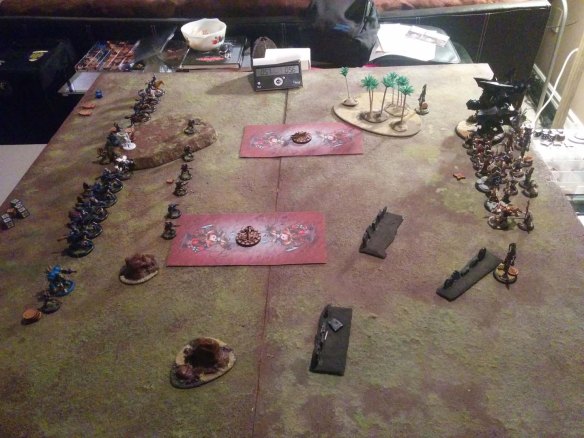 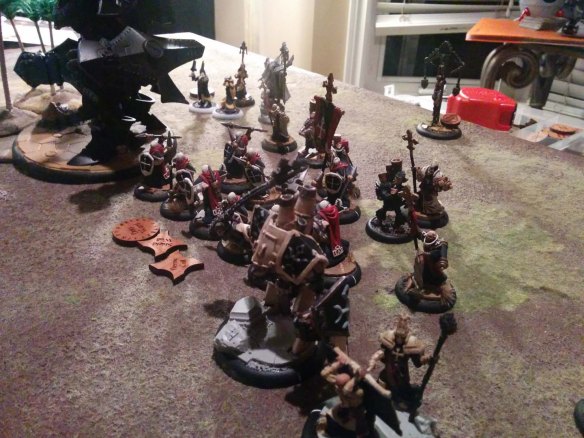 – Haley camps all her Focus, Jakes allocates 1 to the Charger
– Haley goes first. She walks forward onto a hill and summons both Echos. She then casts “Temporal Flux” and puts “Tactical Supremacy” on the Trenchers
– Trenchers activate, walk forward, and pump out their smoke clouds
– Rhupert walks up a little and gives “Dirge of Mists” (+1 DEF) to the Haleys
– Journeywoman Warcaster casts “Arcane Shield” on the Lances
– Jakes moves up and casts “Sidekick” on her Charger
– Lances run forward to be behind the Trenchers
– Blazers run up the left flank, spreading out
– Thorn walks through Future Haley to be on the hill
– B13 run forward and spread out into the zone, keeping Ryan far back
– With everyone done, “Tactical Supremacy” triggers and Marc’s Trencher’s pull back out of the clouds

– Sevy allocates none, but upkeeps Holy Ward
– Choir sings “No Spells” again.
– Vassal gives the Templar “Enliven”
– Blessing of Vengence moves up behind a wall on the right side of the table
– Templar moves forward up the middle of the table
– Severius gets Harmoniusly Exalted. He casts “Awareness”, pulls from a Wrack (which does not explode), and then declares a charge on his Templar… sadly, due to the placement of some of the TFG, he isn’t able to quite get out of the Killbox. Ruh roh.
– Judicator moves forward and pumps out some rockets at my Lances. One kills two Trenchers, and one lands on Watts and kills him. One Flamethrower shot goes at a Blazer but misses
– TFG Shieldwall forward and pop their Mini-Feat (Iron Zeal, +4ARM)
– Covenant says “No KD” again, and Rhupert makes the TFG Tough once more.
– Aiyana and Holt move up behind the Judicator and give themselves Stealth.

Score goes to 2-0 for Cygnar

– Haley upkeeps both Echoes but drops Tactical Supremacy. The Junior drops Arcane Shield, and Jakes upkeeps “Sidekick” and allocates 3 to her Charger.
– Trenchers go first, moving forward and trying to get out of the way of my Lances. They do a few CRAs into TFG, inflicting 1 casualty.
– Blazers go next and pump 4 Brutal Shots into Darrell’s Objective, killing it. One shot goes into the Judicator for minor damage. They Light-Cav away from the Judicator
– Black 13th activate. Ryan moves up and shoots a Magestorm at the closest TFG, but is out of range. It scatters onto the Covenant, inflicting 1 point of damage, and kills Darrell’s Rhupert. It fails to wound Blessing. Lynch takes a shot at the Book, hitting and inflicting 1 more point of damage.
– Haley activates, all three moving forward. Past Haley casts “Chain Blast” on Aiyana (way out of range, but the only eligible target in LoS). It scatters into the Judicator twice for no damage. Major Prime Haley casts it a second time, and it scatters away once and into the Judicator the second time to no effect. She camps 1 Focus.
– Charger moves forward and takes a shot at Blessing. Out of range. Buys a second shot at the Templar, also out of Range.
– Storm Lances charge forward. Marc uses an Impact Attack to kill 2 Trenchers in the way of the charge lanes (hitting and killing both). Charges get 4 on the Judicator and 1 on the Templar. Assault shots first do a few points of damage (Darrell and I both forget about Enliven), and then charge attacks inflict about 30 points of damage on the Judicator and about 8 on the Templar. Nothing crippled on either.
– Jakes moves up behind an obstruction to keep the Charger in CTRL-range.
– Rhupert puts “Dirge of Mists” on Haley

Score goes to 3-0 for Cygnar 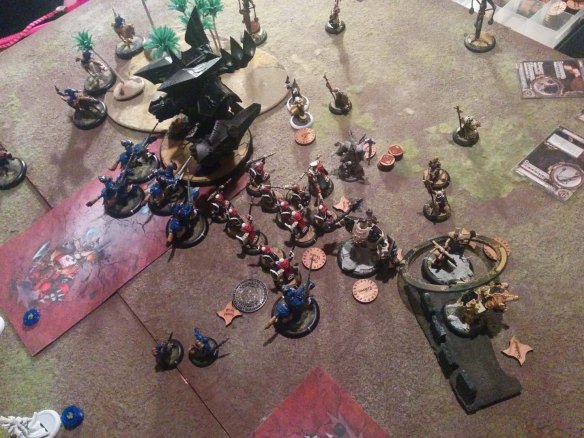 – Sevy gives 2 to the Judicator (generates a 3rd), 2 to the Templar and upkeeps Holy Ward.
– Choir sings “Battle”
– Judicator activates and rotates to get all 4 Lances in one arc. Does a Power Attack: Sweep, hitting and obliterating all 4 Storm Lances effortlessly. Wastes 2 Focus
– Templar gets an Ancillary Attack, hitting and killing the last Storm Lance. It then activates and charges Marc’s objective, but fails to kill it (leaving it on 3 boxes).
– Sevy moves forward (into the Killbox and his friendly zone) and pops his Feat, rolling to control 5 models. Darrell takes 4 Blazers; the first shoots the Squire, vapourizing it, and the other 3 move to take shots on Haley (all missing), and then Light Cav far, far out of formation. He also nabs a Trencher, who stabs the other Trencher to death.
– Aiyana moves up and gives Magic Weapons to the TFG. Holt wanders over to take 2 shots at Blazers, and manages to hit and kill 1.
– TFG charge forward. 2 get on Past Haley, 2 more on Future Haley, 1 on Lynch, and a couple more on a possessed Blazer. Darrell gets lucky dice and kills Past Echo with a 2 man CMA, needing a 9 to hit and a 11 to kill. Misses Future Echo, Lynch, and the Blazer
– Blesisng of Vengence moves up into the zone on the right.
– Covenant moves out of the Magestorm and says “No Spells”.

Score stays at 3-0 for Cygnar, and Darrell is down to 5 minutes on the clock (Marc has about 23 minutes left). 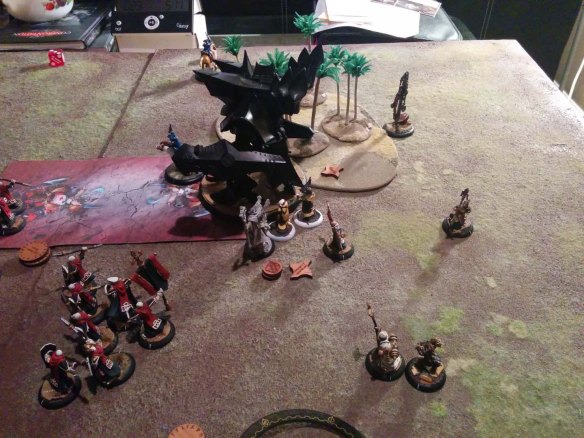 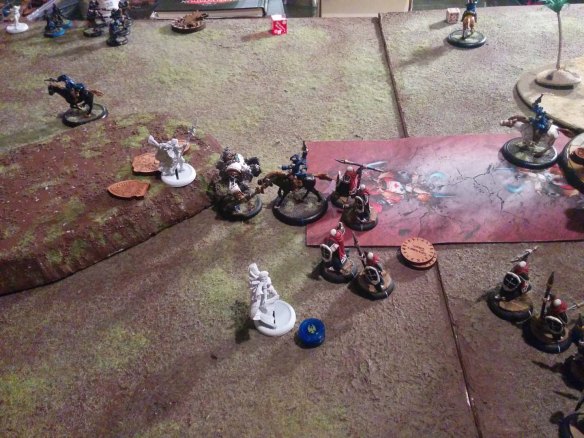 – Haley camps everything (6, due to the loss of Past Echo), Jakes allocates a full stack to her Charger again.
– Charger goes first, walking towards Sevy but Marc realizes there is no way to get within range. Instead, takes 2 shots into the Templar and inflicting moderate damage.
– B13 go. Watts takes a shot at the TFG engaging them, missing. Ryan’s first shot kills the TFG, and the second shot puts another point of damage on the Covenant.
– Blazers activate and Marc gets the Formation rules wrong (shocking!). As a result, only 2 Blazers can do anything: they move towards Sevy and take shots, but fail to hit.
– Haley activates. Future Echo moves forward (Incorporeal, so no free strikes) but can’t get within 5″ of Sevy. Haley casts “Temporal Flux” and tries to get into a position within 12″ of Sevy but out of Reach range of a nearby TFG: it isn’t possible, so she instead moves to engage 2 TFG, and then pops her Feat. Future Haley fires on Sevy, needing 8s to hit. Boost to hit, hits, boosts damage, and at dice – 3, inflicts 2 points. Buys an attack, boosts to hit, hits, and inflicts 1 point of damage (wooooo…). Buys last attack, rolls a hard 8 to hit, and inflicts 3 more points of damage. Haley stabs both TFG very dead.
– Thorn activates and stabs a few more TFG dead.
– Rhupert puts Dirge on Haley again
– Journeywoman Warcaster moves up and casts “Arcane Shield” on Haley. 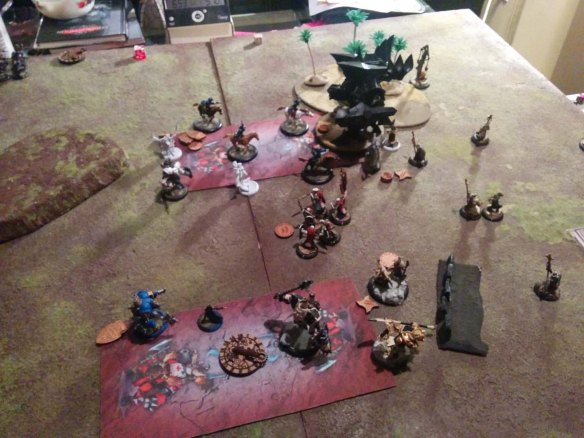 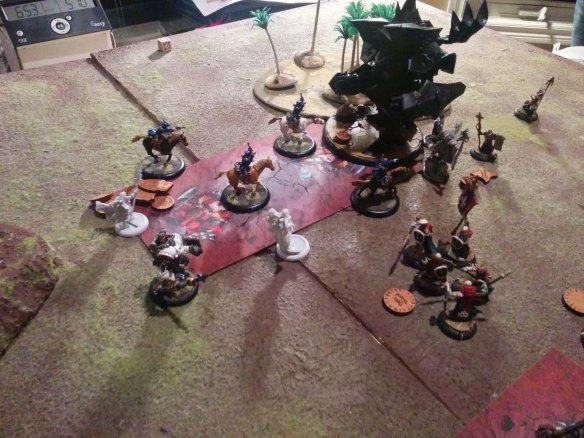 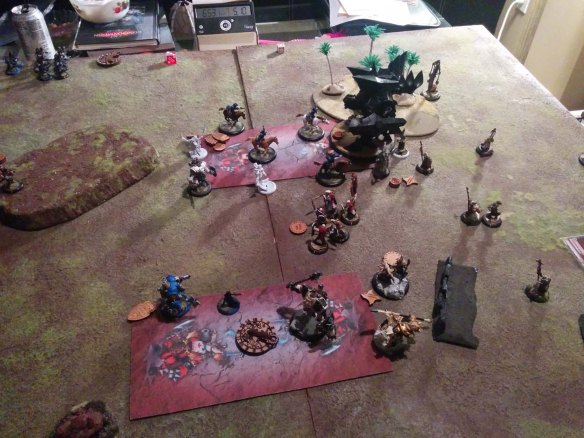 – Sevy allocates 3 to the Judicator and drops Holy Ward.
– Choir sings Battle again
– Aiyana gives the Judicator Magic Weapons
– Sevy moves up and swings on a Blazer, missing.
– The Judicator moves forward, but can’t *quite* get Haley in Flamethrower range. It shoots both rockets at her, with them scattering harmlessly away all 4 times.
– Darrell runs out of time…

Victory to Cygnar from Death Clock!

We rabbit-chased the turn if Darrell hadn’t clocked himself: Haley manages to survive, with nothing Darrell had on the table capable of hitting her. And next turn, one of the two of them can finish off Sevy (theoretically, at least!) with Temporal Flux on him.

Still, a solid game, and when the Trencher Smoke Wall fails, it fails completely… basically useless in this matchup. So much so that I’m seriously considering dropping the Trenchers from the list… they’re a neat addition, and I see why others like them, but I think Haley3 can get better use out of a different unit. Also, the list needs way more ARM-cracking… although what form that will take specifically, I do not yet know.