Greetings all!  Yet another battle report coming your way from the Combo Smite crew.  This one has nothing to do with tournaments or competitive play but is more entertaining than any of the Rocky movies – except perhaps the one with Bullwinkle.

Aaron sauntered to the ring bearing this 50 pt list

A solid list.  You can never go wrong with Iron Fleshed Kayazi or Iron Fang pikemen and the Old Witch is no slouch.  The Great Bears and the Doomreavers are always solid choices as well.

Fresh out of a truly abysmal tournament showing at the Hobby Kingdom, I came out swinging with this 50 point pMadrak list:

A pretty good list overall.  The only thing I’m not sure of at the point of writing is the Horgle Ironstrike package.  It’s 12 points and at that cost they could be several other options from the Trollblood arsenal.  I’m also considering adding Thrulg to the list for some spell defense.

The Scenario was Fire Support from the 2014 Steamroller package.

Aaron won the roll to go first and chose to do so.  In my infinite tactical genius, I chose the side I was sitting on.  Mainly because I`m lazy but also because of the large tree base on Aaron`s side of the board.  Aaron deployed his Kayazi Eliminators on his left flank followed by Fenris, the Great Bears and the unit of Kayazi Assassins with Underboss.  Following that his Spriggan was deployed just right of center with the Iron Fang Pikemen on the right side of his deployment zone.  The Old Witch, Scrapjack, Sylys and the Iron Fang Kovnik were deployed behind the pikemen.  Lastly, the Doom Reavers and Greylord Escort were Advance Deployed just left of center in front of the Kayazi Assassin Unit.

On my side of the board, I deployed the Kriel Warrior unit on my left side, followed by the Slag Troll, Rök and the Pyre Troll.  Horgle was deployed behind the Slag Troll and Madrak behind Rök.  The Krielstone unit and UA followed and lastly my right flank was protected by the Earthborn Dire Troll.  Lastly Lanyssa and the Fell Caller were deployed centrally behind the Pyre Troll. 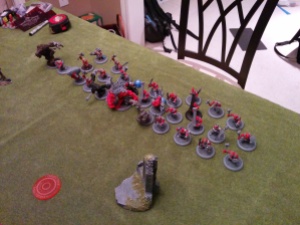 Pretty much everything runs save the Old Witch who advanced and cast Murder of Crows and the Kayazi Assassins who advanced behind the Doomreavers, holding themselves back as a second wave. 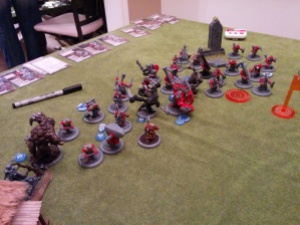 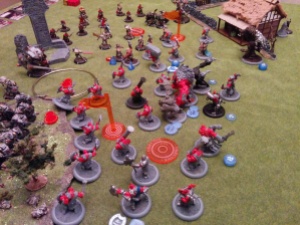 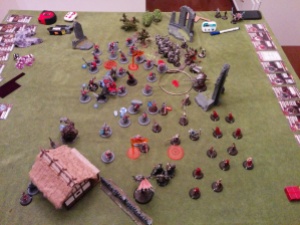 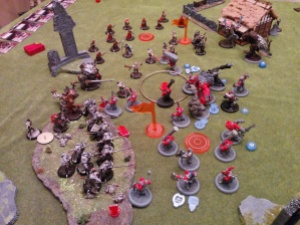 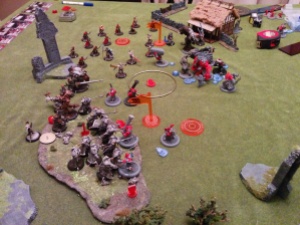 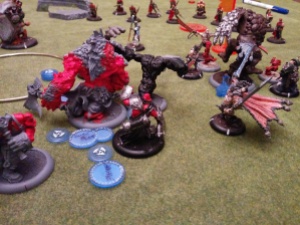 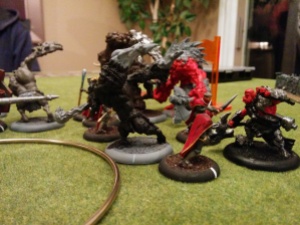 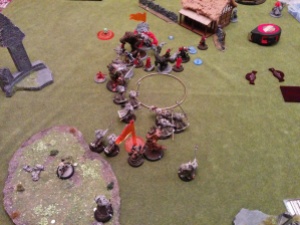 All in all, a close, hard fought game by both Aaron and myself.  Congratulations on the win Aaron!  Though I did clock out, Aaron’s time was nearly expired as well.  There were a couple of rules mistakes by both players, but despite this the game was a great learning experience and I’d love to play this match again.  Honestly I’d rather make these mistakes during a practice game, and document it here so that everyone can learn from them than during a tournament.  I think that one of the biggest turning points in the game was the turn Aaron did not advance his Kayazi Assassins.  By failing to do so he stayed out of threat range of my beasts – he kept control of the game’s momentum by preventing me from mounting any sort of offensive on that side of the table.

The Old Witch definitely had the advantage in this match-up but Runes of War would have been heavily countered by her FEAT as well. The hard match-ups really show you what you can do with a list in less than optimal situations and that you learn more from them than from favourable ones.

Thanks again for reading and listening!  Please post any comments and constructive criticism below!

8 thoughts on “Podcast 053 – Khador vs Trollbloods, for Kith, Kriel and Khador?”