I’m starting to really like my SUS-list for Siege… and what better way to send it through the crucible than up against Trolls, which is basically the whole reason people play Siege in Cygnar in the first place!

The next major convention/tournament, the Southern Ontario Open, will be upon us in a few short weeks (the first weekend in May). And as super-excited as I am to be playing in it, I know my lists need work between now and then. My eHaley list is sort of coming into its own, but to be honest, eHaley can make just about anything work, so that’s not a statement of any weight. My Siege list, though… well, it still needs work.

The list has 8 points of WTF in the form of the 5 point Grenadier with the 3 points of Trencher Cannon. I really wish I had 1 more point for 2 Trencher Master Gunners instead…

Scenario is Incoming: two 12×6 zones assymetrically around the middle, one friendly and one enemy, with an objective 18″ up from your edge of the table. 1CP to destroy the enemy objective, dominate the friendly zone, or control the enemy zone, and 2CPs for dominating the enemy zone.

Darrell wins Initiative and elects to go first. I pick the side of the table with the big hunk of water to deny it to Darrell.

Darrell deploys his 3 heavies in the middle (Mauler left, Earthborn central, Mulg slightly right), with 2 units of Runeshapers on either flank. Janissa, Doomshaper, and the Krielstones go in the middle. Axer goes a little closer to Mulg. 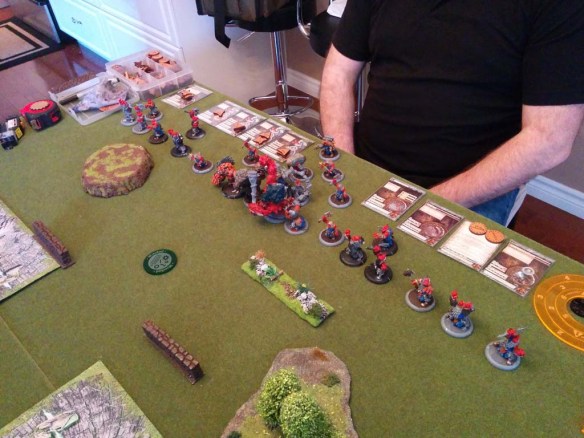 My deployment has the Stormwall in the shallow water with the ATGM in the middle. Siege, Reinholdt, and the Squire go near the middle, with the rest of my mercs flanking to the left. The Grenadier and Trencher Cannon get Advanced Deployed to the left of the Objective, and the Rangers get AD’d in front of the Stormwall. Lastly, eEiryss goes far right.

We are ready to rumble!

– Mauler activates and walks forward
– Mulg activates and runs up
– Earthborn activates, puts “Transmute” on the Mauler, walks forward.
– Axer runs and riles.
– Doomshaper goes, walks up, puts “Fortune” on Mulg. Dumps the rest of his Fury into the Krielstone.
– Janissa moves up and drops a Rock wall in front of Mulg
– Krielstone pops “Protective Aura” and “No Stealth” and runs forward, spreading out.
– Runeshapers all run forward and spread out.

– 1 Focus to the Stormwall (“just in case”), and we’re off.
– Journeywoman Warcaster puts “Arcane Shield” on Stormwall.
– Cannon Crew goes first, lobs a shot at the Mauler. Needs a 9 to hit, misses, and scatters onto a few Runeshapers, forcing 2 Tough Checks. Darrell passes both.
– Grenadier activates and lobs out his 3 shots. Nothing in range, but the scatter clips an already wounded Runeshaper once. I boost damage, forcing another Tough Check, which Darrell passes.
– Rangers move up and open Fire on a few Runeshapers they can see. I force another 2 Tough Checks. Darrell passes both.
– Eiryss moves up but doesn’t have LoS to anyone.
– Stormwall moves up, nothing in range. Drops a pod at the corner of my zone since I suspect my Rangers are not long for this world. Drop Covering Fire to make Darrell think twice about charging them.
– ATGM move up between my Objective and the pond. Take Snipe shots: nothing in range aside from the Axer, who I miss.
– Siege moves up and puts a Foxhole to the far left.
– Reinholdt ad Squire move up behind him.
– Aiyana, Holt, and Gorman run into the Foxhole. 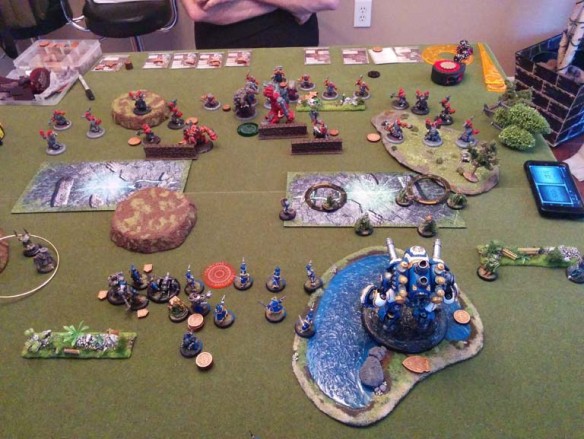 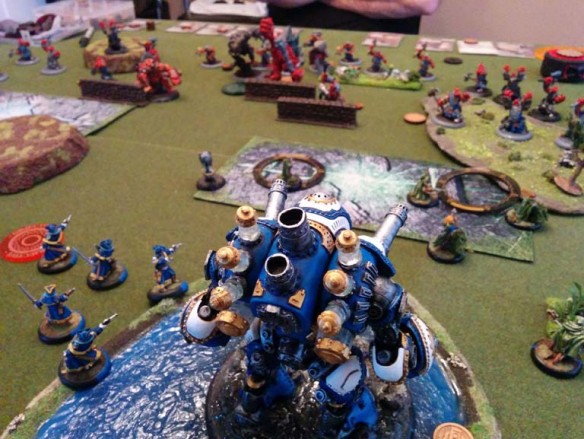 – Darrell starts by pulling in Fury, and upkeeping “Fortune” for free, but has 1 too many on the table. Leaves it on the Axer… which promptly Frenzies. Doomshaper burns his scroll and the Axer charges up to the wall in front of him.
– Runeshapers on far right activate and move forward. One takes a shot at Eiryss that scatters away harmlessly. The rest shoot Rangers, killing a couple.
– Second unit of Runeshapers on right side move up. First shot misses a Rangers and scatters onto another Runeshaper, but fails to wound. Darrell elects not to use the rest.
– Earthborn walks forward and puts “Transmute” on Mauler.
– Mulg goes next, walking forward a little.
– Doomshaper moves up and puts “Transmute” on Mulg. Tops off Krielstone and Camps 3.
– Janissa activates, walks forward, and puts a wall in front of Doomshaper.
– Krielstone activates, puts up “No Stealth” and +2ARM again.
– Runeshapers on the left walk forward and take shots at Holt, needing 12s to hit. A few scatter onto Gorman or Aiyana, but everyone is immune to blast damage. 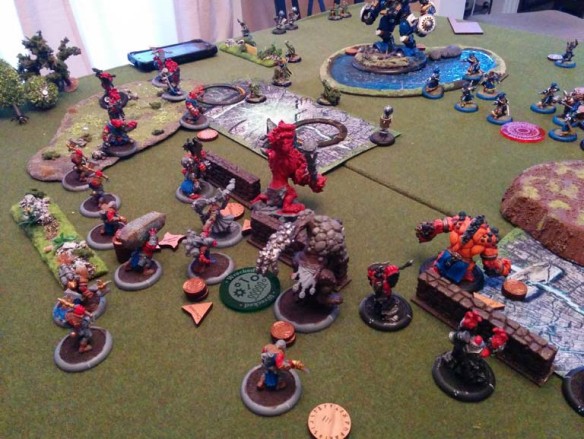 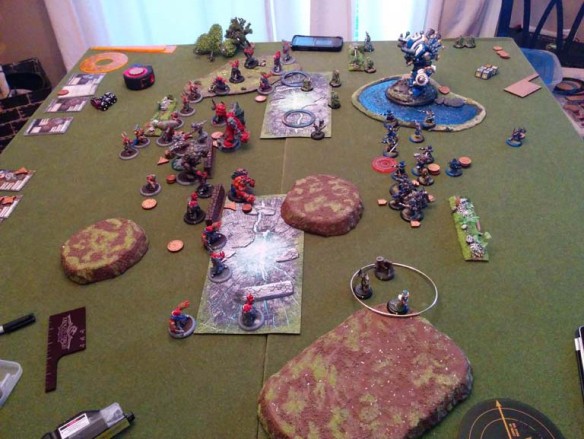 – Give 3 to the Stormwall, pull from the Squire, drop Foxhole, upkeep Arcane Shield
– Reinholdt reloads Siege.
– Siege goes next. Moves up a little and sinks 2 shots into the Mauler, doing light damage (crappy rolls).
– Trencher Cannon hits Mauler for moderate damage.
– Aiyana and Holt activate. Aiyana uses “Kiss” on the closest unit of Runeshapers. Holt aims and kills 1 on his second shot (who finally fails a Tough check!).
– Gorman activates and legs it behind Siege, realizing that he’s too fragile to be anywhere near Runeshapers.
– The Rangers activate and walk. I park 1 as close to Janissa as I can, who (thankfully) is just out of 1″ from the wall. The Rangers open fire, and my dice laugh at me as the bullets either fly wide or ping harmlessly off her.
– ATGM activate and walk forward. I pump Snipe shots into her, and she laughs as the bullets ping harmlessly off her.
– The Stormwall activates and puts a big Cannon shot into her. She dies… and Toughs. 2nd shot does the job, though. I elect to fire the Metal Storm guns and kill 3 Runeshapers on the right. Lastly, it drops a pod between Mulg and the Stormwall.
– Grenadier opens up on “Kiss”ed Runeshapers, killing 1 and forcing a Tough Check… which Darrell passes. 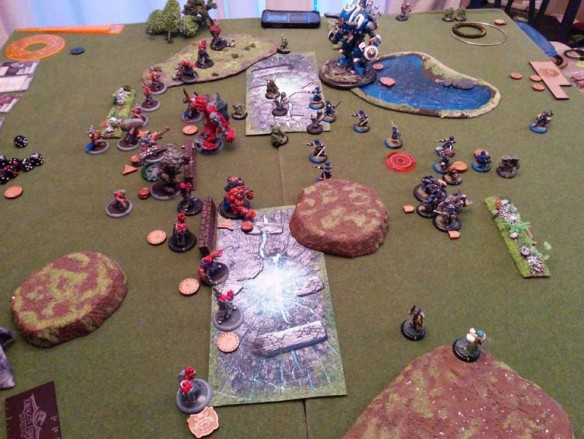 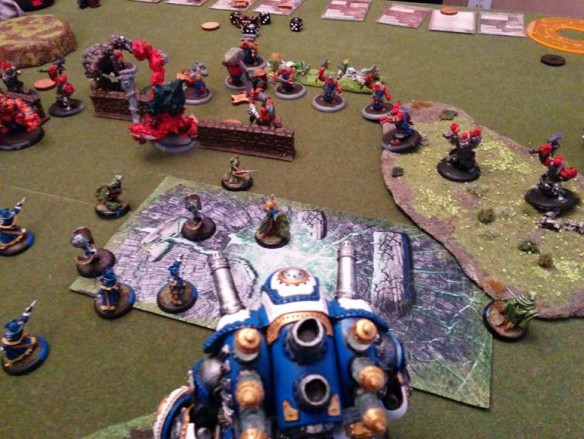 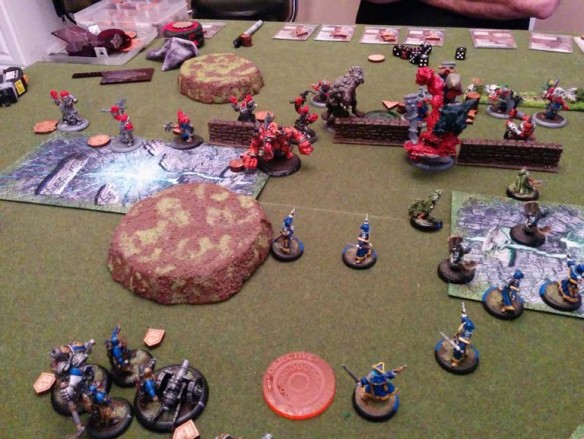 – Doomshaper pulls in his Fury (the correct number this time!), Janissa’s wall disappears.
– Axer gives Mulg “Rush”, moves up, and kills a Ranger in Mulg’s way.
– Krielstone moves up, gives +2ARM and +1STR
– Remaining unit of Runeshapers on the right move up and take out the Stormpod and Eiryss.
– Mulg charges the Stormwall, easily getting distance (albeit not by much). He burns through his stack (and his freakin’ extra attack from Doomy), leaving the Stormwall on 21 boxes and the right side totally crippled.
– Doomshaper moves up behind a wall and pops his Feat. He casts “Purification” (removing Fortune and Arcane Shield).
– Mauler moves up a bit.
– Earborn moves over next to wall in front of Doomy.
– Runeshapers on left kill Holt but fail to kill Aiyana. 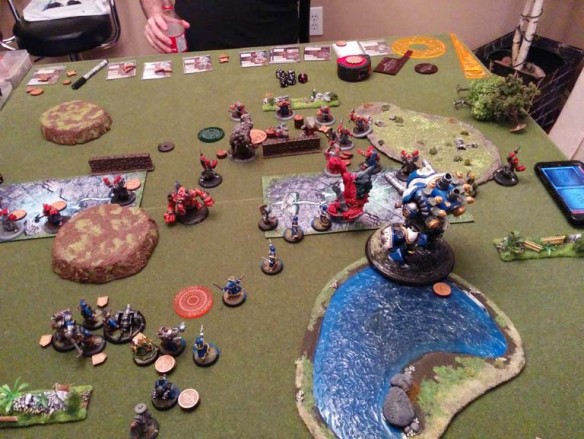 – 3 Focus to the Stormwall, nothing to upkeep.
– Last Ranger goes first, runs towards the middle of the table to get as much within 5″ as possible. Dodges Mulg’s Reach, stays within Reach of the Axer.
– Aiyana moves over and puts “Kiss” on the Mauler.
– Reinholdt reloads Siege
– ATGM activate. 1 engaged by Mulg walks to the other side of him. The rest pump Thunderbolt shots into him, but none crit.
– Siege activates, moves up to get Earthborn within Feat (but stay out of Doomshaper’s Feat). Pops Feat, drops a Ground Pounder on 2 Runeshapers (vapourizes them), pumps 2nd shot into Mauler:does a stunning 19 damage.
– Stormwall activates, hits Mulg with operational arm for 12 damage (very, very bad roll). Burns through rest of attacks (taking 10 points of damage from Doomshaper’s Feat), does about 17 points of damage (missing 2 attacks). Drops a pod next to Mulg.
– Gorman walks up and tries to Black Oil Mulg by shooting the Stormpod: out of range, scatters the wrong way and hits nothing.
– Trencher Cannon puts a round into the Earthborn, and at dice damage, inflicts a pathetic 8 points (boo!). Trencher Rifles manage to kill a Runshaper.
– Grenadier takes 3 shots into the Mauler with Crit Brutals, but doesn’t Crit any of them. Still, inflicts enough damage to kill it.
– Journeywoman activates and puts “Arcane Shield” on Siege.

– Pulls in Fury, but leaves some on the Earthborn and Axer. Both Frenzy: Earthborn walks over to Doomshaper and hits him for 9 points of damage, which is transfered back to the Earthborn. Axer kills the last Ranger.
– Krielstone activates, pops +2ARM and +1STR
– Mulg activates, kills ATGM and Stormclad. Goads towards other ATGM: misses.
– Runeshapers on left activate and kill Aiyana. Try to hit the Grenadier: Miss by a mile, but scatters onto Reinholdt and kills him.
– Right Runeshapers take a few shots at my Objective, trying to knock down Siege, Squire, and The Dude. 3 Hits, no Crits, and no kills (couple points of damage on The Dude and Squire).
– Darrell scores 1 CP for controlling my zone. Score is 1-0 Trolls! 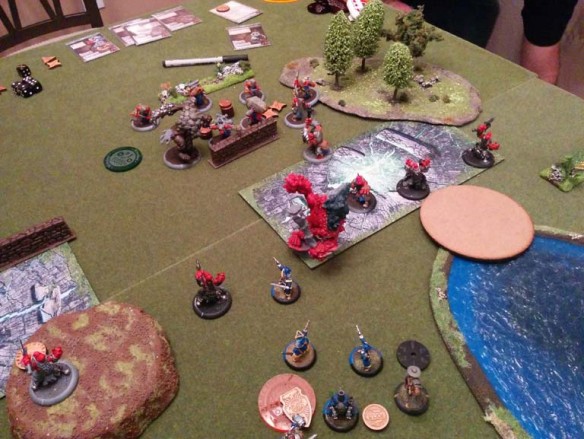 – Only 4 minutes left on the clock… eek! Camps everything, pulls last Focus from Squire, upkeep Arcane Shield.
– ATGM aim at Mulg, manage to Crit-knock him down.
– Gorman walks over, lobs a Blind Grenade at the Knocked Down Mulg. He also (completely by coincidence!) contests the zone.
– Trencher Cannon kills another Runeshaper, Rifles mop up another.
– Grenadier clears out another few Runeshapers.
– Siege runs into zone on full camp (ARM27)
– Journeywoman runs away from all the scary Troll Runeshaper AoEs.

I score 2CPs, but have only 6 seconds left on my clock. Score is now 2-1 for Cygnar! 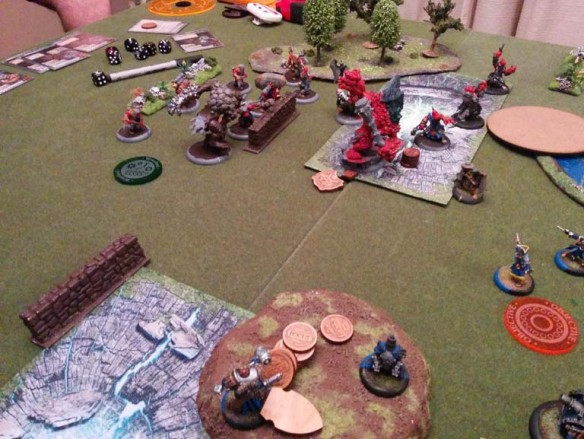 Score goes to 2-2, and Darrell is down to 6 seconds as well. 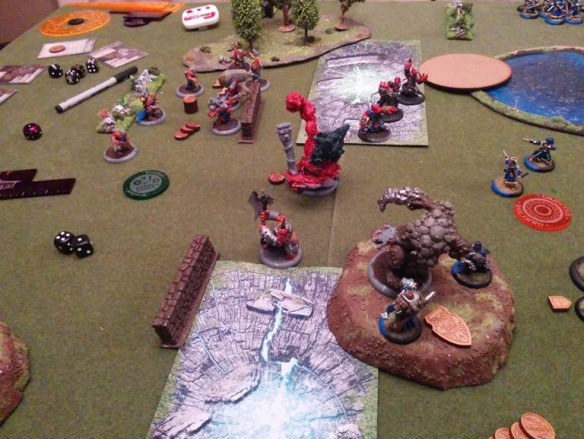 – 6 seconds left on the clock! Gah! Go!
– Siege casts “Force Hammer” on the Earthborn, hits, pushes it back 2″ and out of the zone. Charges Axer, boosts to hit, hits, and slams the Axer out of the zone (and into Mulg).

I run out of time, scoring 2 more CPs and making the final score 4-3 for Cygnar, but a victory for Trolls. 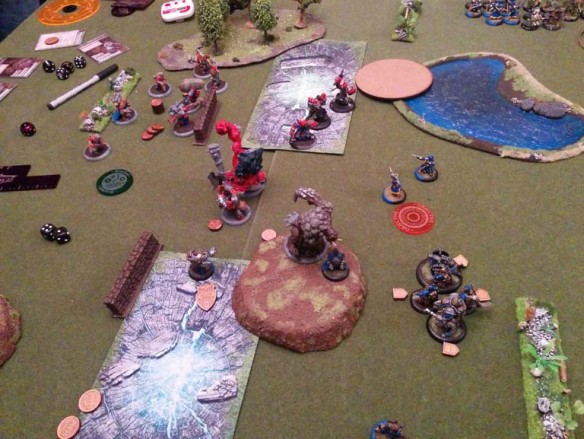 Ah, hello Deathclock, my old friend… you’ve come to talk to me again.
Seriously, though, another few minutes and I probably (PROBABLY) could’ve made a game out of this. Move models between Darrell’s zone and his army, keep him slowed down and tied up, and use Siege to Slam things away (or, in a pinch, kill them). But, t’was not to be…

I move the Stormwall up too far, but the “safe” zone between it and Mulg is only about 1-3″, maximum. Darrell should’ve used Doomy to Purify off Arcane Shield before sending in Mulg (that extra 15 damage could’ve crippled both arms!), and it’s a shame he had so many Frenzies.

Still, great game, and very educational. I think I may be ready to abandon my SUS-Siege list for now… for now…

Thanks for listening! Comments, questions, and suggestions are always welcome!