Were you aware that with “just” Haley3 on the table, your average Cygnar player will require 18 Focus tokens? Sounds like a lot… and, of course that doesn’t include a Journeywoman Warcaster, nor Jakes… but with the right list, eZaal can easily outdo even the most Focus-plentiful lists! 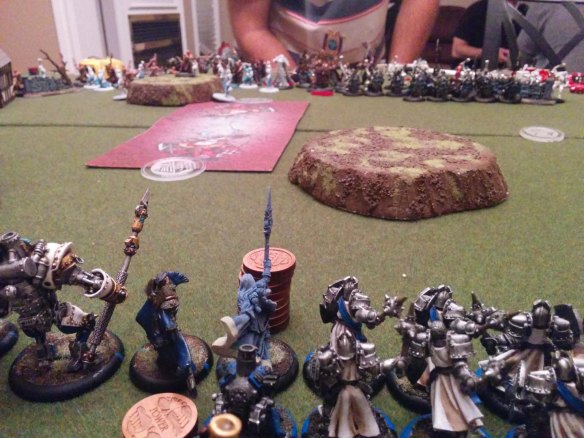 So, basically, his schwartz is as long as mine… but can he *use* it?

Scenario is Recon: central lengthwise 6×12″ zone with Objectives on the narrow, closer side, and flags 12″ in from the table edge. 1CP to destroy the enemy’s objective, control the central zone, or dominate either flag, and 2CPs for dominating the central zone. No killbox.

We rolled for initiative, which Kassem won and elected to go first.

Kassem deployed in this way:

We were then ready to get started! Go team High Focus! Down with team High Fury!

– All the infantry run forward and spread out.
– Zaal casts “Vision” on the TycomStanBear, and puts “Transference” on himself. He then walks forward. He uses the Krea animus on himself.
– The Bronzeback runs towards the hill. The Krea moves nearby and uses Paralytic Aura.
– The Shaman and Savage both run forward.
– Paingivers run up. 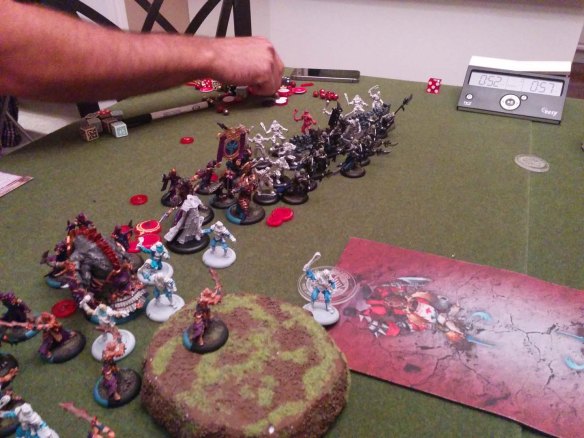 – Haley camps her full stack, as does Jakes
– Tempest Blazers run forward and spread out on the left
– Precursor Knights run forward and spread out, leaving the Standard near to Gallant
– Jakes activates and casts “Energizer” for 1, and then casts “Sidekick” on Gallant. She moves closer to the middle of the table.
– Haley activates. She arcs “Tactical Supremacy” through Thorn onto herself (moving Thorn 3″ from Reaction Drive), and then walks forward. She casts “Temporal Flux” and then puts out both her Echoes: Past Echo goes closer to the Precursor Knights, while Future Echo goes closer to the Blazers.
– Thorn walks towards the Objective and slightly to one side.
– Gallant runs forward (with the free focus from the Precursor Knight), toeing into the forest about 8″ from Past Echo.
– Sword Knights run forward and spread out between/around the Blazers
– Rhupert moves up and gives “Dirge of Mists” to Haley
– Runewood runs onto the hill near Haley
– All moves completed, “Tactical Supremacy” triggers: Marc move the Echoes to catch almost all his army (I missed a Blazer on the far left) 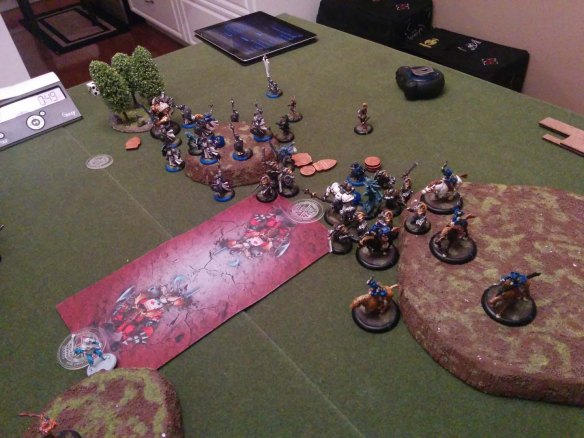 – Kassem pulls back up to max Fury, upkeeps both Vision and Transference.
– Karax get “Press Forward” from the TyComStanBear and then Shield Wall, moving up the table.
– The right unit of Slingers activates and moves forward. First one takes a shot at Gallant (DEF19 in the forest), needing boxcars to hit… Kassem gets Boxcars. Inflicts 4 damage on the warjack and corrodes him and 2 nearby PKs. Rest of the slingers (needing 10s) all miss PKs.
– Left unit of Slingers activates and moves forward. The closest lobs at Thorn (who isn’t quite behind the Objective enough to gain Cover), needing 10 to hit: Hits, doing 3 damage on Thorn and corroding him, 3 Sword Knights, and a Blazer. The rest all miss.
– Nihilators run up around the Slingers.
– Krea moves up and uses its Aura again.
– Bronzeback positions itself on the hill near the Krea.
– Savage moves forward
– Shaman moves towards the middle of the table
– Zaal moves up and uses the Krea animus on himself.

– Corrosion kills 2 Sword Knights and 2 PKs, does 1 damage to the Blazer, and goes out on both warjacks.
– Haley upkeeps both Echoes and pulls from the Squire. Jakes upkeeps Sidekick and allocates 2 to Gallant
– Haley goes first. Future Echo casts “Revive” on a Precursor Knight, as does Major Prime. Haley then casts “Temporal Flux”. The unit then moves forward. Past Echo casts “Chain Blast” on Kassem’s Objective, hitting it, Zaal, and a Slinger. Does 1 point to the Objective, boosts damage on Zaal and inflicts 2 points, and kills the Slinger. Haley herself shoots a Karax but misses.
– Precursor Knights get “Shield Wall” orders and move up to engage the Karax. Awful rolls come out (needing 5s to hit, Marc misses 6 of his 8 attacks), but does manage to kill one or two.
– Blazers activate, moving up and taking shots at Nihilators and Slingers with Electroleaps (which don’t generate souls from the electroleap). One Nihilator Toughs a few times, but 6 Slingers and 2 other Nihilators all die. They Light Cav back to safety.
– Sword Knights activate and get Run/Charge orders. There are 3 successful Charges (on the knocked down Nihilator and 2 Slingers), and a bunch of running to engage other models. The Nihilator dies, but both Slingers are missed.
– Thorn moves forward towards the middle of the zone behind a protective line of Sword Knights.
– Rhupert gives “Dirge” to Haley again.
– Gallant gets Energizered for 1 again, nabs his free Focus, and charges a Slinger. Hits, kills, buys 2 more attacks and kills 2 more.
– Runewood takes a shot with his handcannon, killing another Slinger. 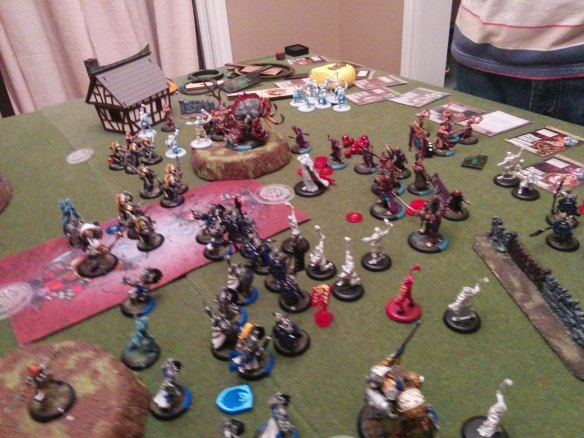 – Kassem has gained 12 souls from Marc’s turn.
– Zaal gets his “Righteous Vengeance” attack, moving closer to Haley and killing a Sword Knight.
– Zaal pulls back in to max Fury and drops everything.
– The Shaman goes first and crafts a Talisman for Zaal (+2″ range to spells).
– Zaal then moves forward, getting Haley within 12″. He uses “Future Sight” on himself and starts lobbing “Sundered Spirit” at Haley, needing 14s to hit (DEF19 + elevation versus his Fury 7). First spell hits! Kassem boosts damage, and at Dice-2… inflicts 3 points. He burns through 11 of his 14 remaining Fury after that but fails to connect again. He camps 3 Fury and pops his Feat.
– 2 remaining Slingers on the left activate. One stabs a Sword Knight (hits, but doesn’t kill) and the other misses with a slung corrosive bomb.
– Nihilators just walk forward. One kills 2 Sword Knights before Berserking onto another Nihilator (who Toughs), and another wipes out several others.
– Paingivers go, giving “Enrage” to the Bronzeback and Savage.
– Bronzeback uses its Animus (Beatback) and charges the Sword Knights in front of Thorn. Boosts to hit, kills one, moves up an inch. Boost to hit the next, kills him, moves up another inch. Buy and boost to hit the third Sword Knight, killing him (the last of the Sword Knights) and finally getting within melee range of Thorn. Buys last attack and hits Thorn, and inflicts heavy damage (but doesn’t cripple anything).
– Savage Charges a Precursor Knight and misses all his attacks.
– Karax Shield Wall again and kill a few PKs, missing most of their CMA attacks.
– Slingers on the right pointlessly lob bombs around, missing absolutely everything.
– TyComStanBear shuffles into the zone.
– Krea moves up near Zaal and uses Aura again.

– Haley pulls from the Squire and upkeeps both Echoes. Jakes upkeeps Sidekick and allocates 2 to Gallant
– Haley goes first. Pops her Feat and casts “Temporal Flux”. Past Echo boosts a Force Hammer into the Bronzeback; hits, boosts damage and slams it away 6″ (killing a Slinger and Nihilator). Inflicts 8 points on the Bronzeback itself. Future Echo casts 2 Revives, putting PKs in Charge positions on Zaal, and Haley adds a 3rd. Haley then takes a shot at Zaal but misses.
– Runewood activates and gives the PKs +2 on their Charge attack rolls.
– PKs activate and get Charge orders. 3 successfully charge Zaal, the rest charge (but don’t get distance) on Karax. They pop their MiniFeat (“Word of Morrow”) for additional die on damage. 2 of the charges on Zaal hit (one misses on snake eyes), and inflict a total of 8 damage on him, one of which Kassem transfers. The other PKs manage to kill the last few Karax.
– Thorn activates, misses a Karax with his spear and hitting the other with his shield but fails to kill it.
– Jakes casts “Energizer” for 1 and moves more central on her hill.
– Gallant attempts to trample up to Zaal (taking 2 Free Strikes from Slingers for no damage), but is about 1″ shy on distance: sadly, this forces him to move back to the nearest legal position, which is only about 3″ from where he started. He buys 2 attacks, killing more Karax.
– Blazers activate and pumps Electroleap shots into the Bronzeback, inflicting 4 points of damage on it and killing Slingers and Nihilators with electroleaps. They then use their Light Cav move to choke all the LoS from Zaal to Haley.
– Squire moves up next to the objective, and Marc is done. 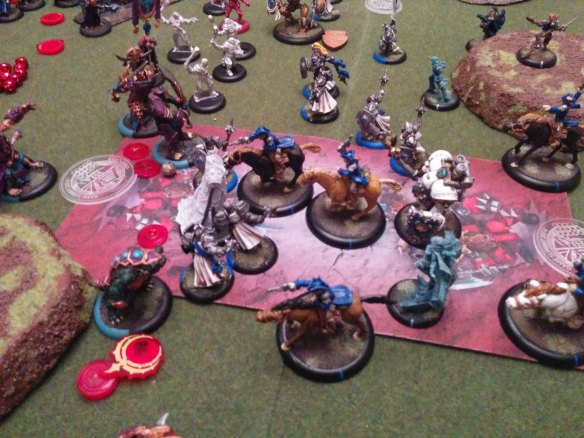 – Kassem does his “Righteous Vengeance” attack, missing a Blazer.
– He has 10 more souls this turn, and Zaal pulls back in his Fury, leaving 3 on the Bronzeback.
– Bronzeback frenzies, but since he’s knocked down just walks to engage the nearest Blazer.
– 2 remaining Slingers on left activate. One hits the Objective for a few points. The other slings at the back of a PK engaging Zaal… Misses, scatters onto Zaal… and hits! Zaal is corroded but takes no other damage.
– Zaal goes next, using “Future Sight” and starts swinging at Blazers. Misses a few times, but ends up killing both Blazers and all 3 PKs near him, leaving him on 3 Fury again.
– Krea activates and tries to kill another Blazer. Fails spectacularly.
– Shaman aims and takes a shot at Future Echo, but misses.
– Savage charges Thorn, missing on its Charge attack. Does manage to get a few hits in, scrapping Thorn’s Arc Node (but nothing else).
– TyComStanBear charges Thorn, misses by a mile.
– Nihilators get Charge orders, and 1 successfully gets distance on a Blazer , manages to hit (total BS) and kills it. The Blazers break.
– Karax take some attacks, everyone misses.
– Slingers on the right manage to obliterate Marc’s Objective and corrode the Squire.
– Paingivers move up, Medicating the Bronzeback and clearing off some Fury.

Kassem scores his first CP, bringing the game to 1-0 for Skorne. 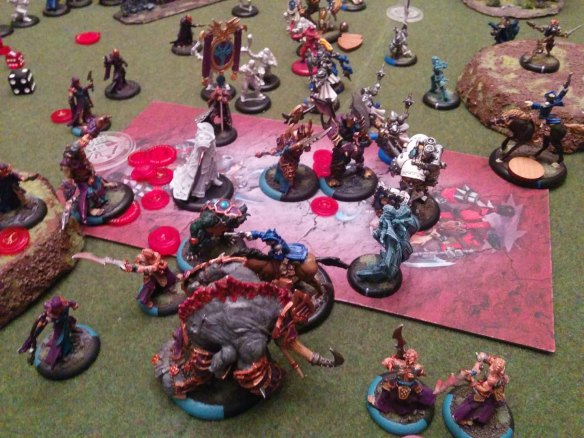 – Haley upkeeps both Echoes and pulls from the Squire. Jakes upkeeps Sidekick and allocates 2 to Gallant again.
– Haley goes first, casting Temporal Flux again. Past Echo walks up to Zaal, and Future Echo pulls back into a position she is not being engaged by anyone. Past Echo hits once (triggering Vision, which Marc forgot to Repudiate), then burns through her stack attacking Zaal, inflicting moderate damage. Future Echo opens fire, hitting and boosting damage but only inflicting 3 points (boo). Buys a 2nd shot and boosts to hit, inflicts 4 damage which Kassem transfers (2 left). Haley herself boosts a Handcannon shot into Zaal, inflicting 6 more point of damage with a boosted damage roll, which Kassem transfers.
– The PKs activate and clear out a few Slingers in front of Gallant.
– Jakes activates and casts “Energizer” for 1. She then aims a shot into Zaal, hitting and inflicts enough damage to cause Kassem to use his last Transfer.
– Gallant Tramples up to Zaal, actually getting the distance this time (and killing 3 Slingers on his way). Buys an attack on Zaal at Dice-1, hits and leaves him on 4 boxes. Buys his 2nd attack, hits… and inflicts 3 more points of damage.
– Rhupert moves up and uses “Tough and Fearless” on the Blazers.
– The unengaged Blazer moves to get LoS to Zaal and pumps a Brutal Shot into him. Hits, and finally kills the warlock. 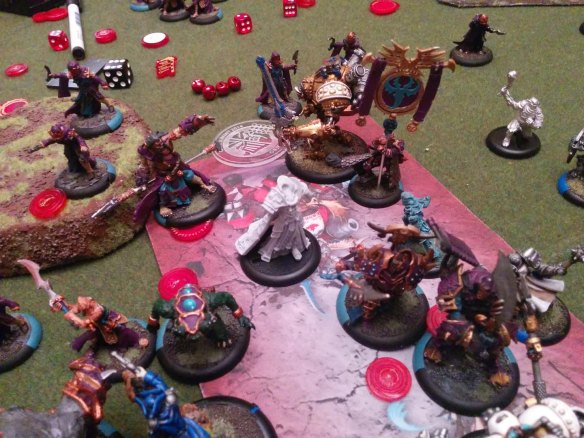 Phew! A lot closer than it should’ve been, but a win’s a win.
I need to get better with figuring out when to use Haley’s Feat… the turn I did use it wasn’t *really* necessary (except for boosting to hit the Bronzeback, and that was probably a waste). Zaal is surprisingly tanky on his Feat turn (ARM23, with +2ARM against ranged attacks if he uses the Krea), and if Kassem had decided to camp more or use the Krea animus, I don’t think I would’ve gone for the assassination.

My list was really going to struggle against the Bronzeback, though… Gallant is really the only tool I have that might be able to get the job done efficiently, and I didn’t have him on the correct side of the table for that. More’s the pity, too…

Anyway, probably going to have to send this list back to the drawing board for awhile! Thanks for listening, and we always welcome any and all feedback!