This week I am taking on Darrell’s Trollbloods with my Legion. It feels like a really long time since I’ve done a battle report. I hope I remember how to do this. 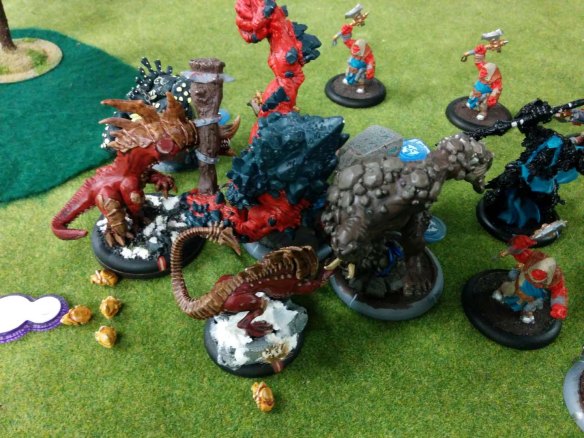 Both of us are practising our lists that we will be playing for the upcoming Ontario Team Championship so both of us knew what list the other was dropping.

My Thags2 list is my dedicated armour cracker and is my go to for most Hordes matchups but especially Trolls, Skorne and Legion. Doomy3 is going to be popular so I’m looking forward to getting some more practise against him.

Darrell is practising his Doomy3 list which he also needs to get more familiar with as well.

I win the die roll and choose 1st turn. Darrell exercises his gamer apathy and take the side of the table his models were on. 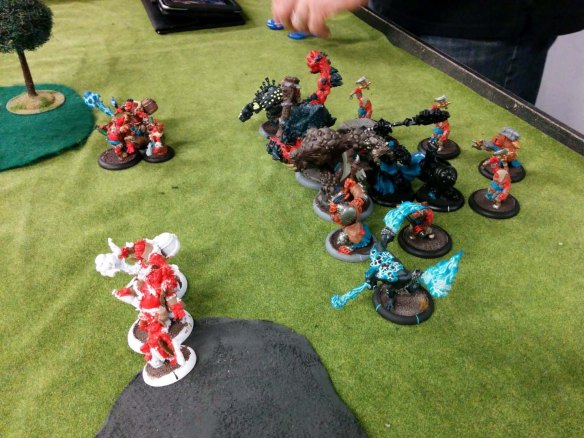 -Thags puts out some Tenacities on both Scytheans and a Raek and moves forward.
-Both Scytheans run up between the wall and house.
-Raek runs up as a screen
-Protectors both run up behind Scytheans to keep them safe from potential Fireeater charges.
-Raek runs up left flank.
-Feralgeists run up to keep all beasts in their command.
-Forsaken pull off some fury and walk forward. 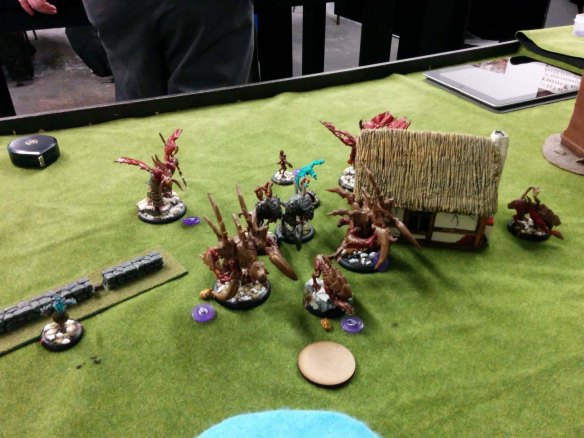 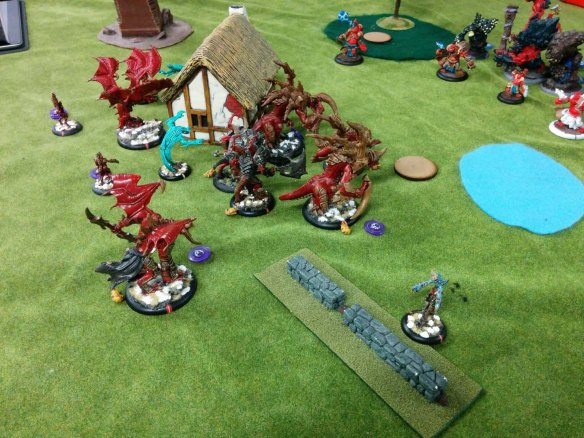 -Thags casts slipstream walks up (Porting right Scythean up) casts Manifest Destiny, puts Dragon’s blood on the left Scythean and pops feat.
-Shredder puts Tenacity on left Raek.
-Left Raek walks forward and kills 2 Fire Eaters.
-Right Raek walks up and kills 2 more Fire Eaters.
-Seraph slipstreams and walks up and ports left Scythean forward.
-Left Scythean charges Mulg and leaves him on 6 boxes.
-Right Scythean can’t get to Mulg so he kills the last Fire Eaters.
-Protectors shuffle up to clog the board.
-Feralgeists run up to get beasts in command.
-Feat attacks: Scythean tries to finish Mulg and leaves him on 2 boxes. One Raek moves up to try to get it done and fails to wound him. The rest of the beasts pull back and try to stay safe from counterattack.

-Doomy feats and puts up implacability and uses the free animus scroll.
-Krielstone does armour and Spirit Chaser.
-Mulg heals a bunch, kills the Scythean and Raek snacking to heal some more.
-Storm troll shoots at Shredder looking to e-leap to a Forsaken and misses.
-Axer rushes itself and charges Raek. He kills it with his 2nd last attack and the Feralgeist jumps in and his last attack misses.
-Pyre walks up and fires at Scythean and misses. Scatter still hits it and lights it on fire. 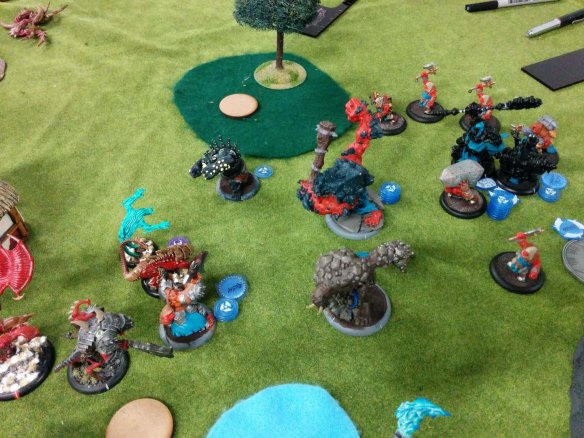 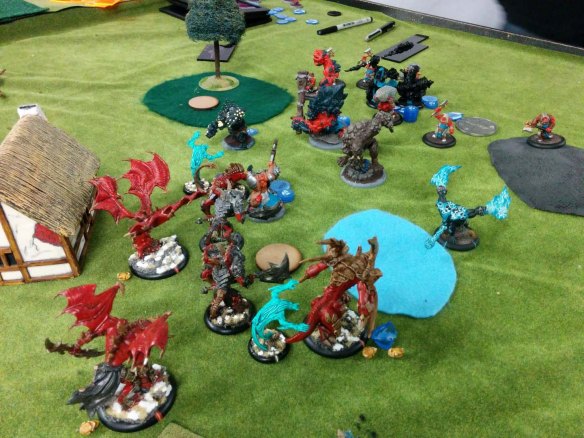 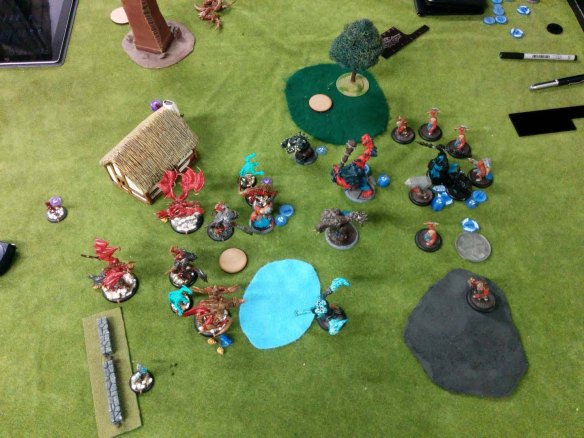 -Thags cast Manifest Destiny and puts out Tenacity on his beasts and toes the killbox.
-Seraph slipstreams Forsaken forward.
-Forsaken Blight Bombs, catching Mulg, the Axer and the Storm troll. Mulg takes 9 damage which is still not enough to take him out because Darrel did so much healing last turn. Storm takes nothing and axer takes a bit of damage.
-First protector tries to do some work on the Axer and does 1 wound after which Darrel heals 3 from Doomys feat. So ya…..
-The rest of my stuff shuffles around and tries to protect Thags and my Scythean.
-Possessed Raek jams Mulg.
-Feralgeist gets into position to jump into some beasts.

-Doomy puts up implacability and does a scroll and puts e-leaps on Storm troll.
-2 of the Krielstone charge the Raek and kill it to unengage the Storm troll. Feralgeist jumps back into engage it (or rather be engaged by it)
-Storm troll punches the Feralgeist and kills it. E-leap fails to kill Forsaken.
-Axer does a bunch of damage to both Protectors and shredder.
-Earthborn walks up and misses a ton of attacks against my DEF13 Protectors and can’t handle my overwhelming ARM19 and is gets virtually nothing done.
-Pyre shoots at Scythean and misses and scatters nowhere. 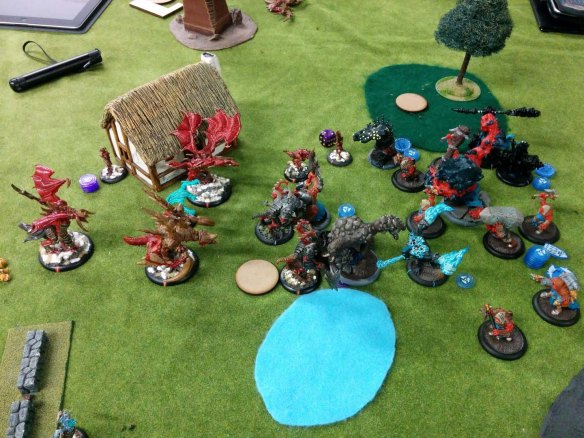 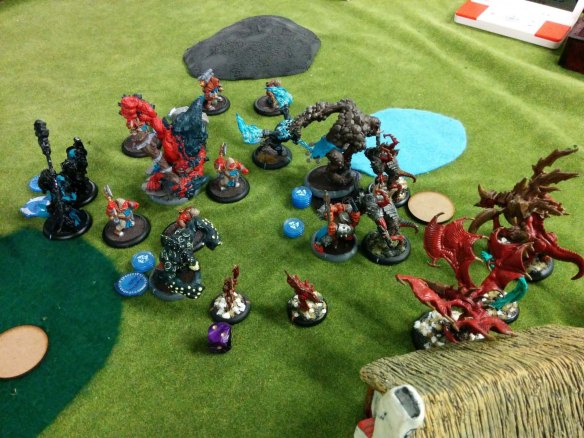 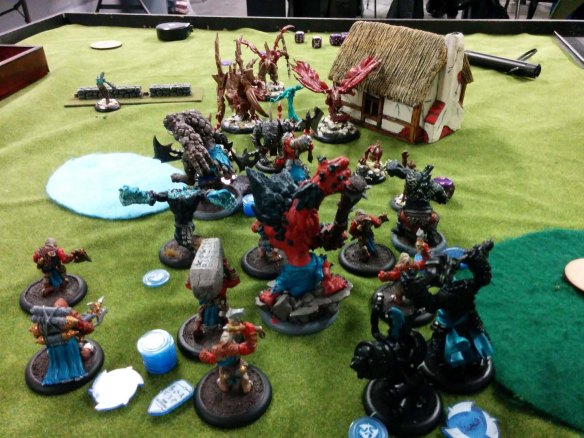 -Thags puts up Manifest Destiny again and puts Tenacity on all the things since it seemed to work pretty well last turn.
-Forsaken walks up and Blight Bombs Axer and Earthborn.
-Seraph goes to town on Axer doing very little damage.
-Other Forsaken retreats from Storm troll.
-Shredder puts 2 more attacks into Axer.
-Protectors each put 2 boosted attacks into the Earthborn and leave it with lots of boxes. (Cheating)
-Scythean walks up and finishes off Earthborn. 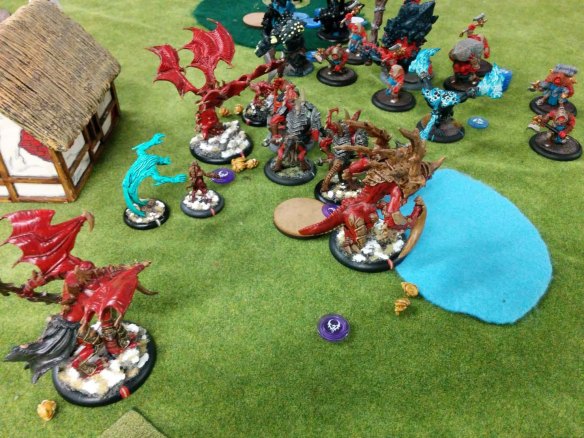 -Doomy rushes himself and walks to his flag and puts up implacability.
-Pyre puts flaming fists on Mulg.
-Krielstone does its thing.
-Storm walks forward to cut off Forsaken from the middle of the table.
-Axer kills Shredder and Protector (twice?)

-Forsaken walks forward and blight bombs tagging Storm and Axer, doing some damage.
-Protector gets out of Thags’ way.
-Thags charges into Mulg and finished him with his claws so the Feralgeist can jump in then kills the Axer.
-Seraph runs to contest Doomy’s flag.

At this point Darrell concedes since he had 30s left on his clock but in reality only the terrorists win.